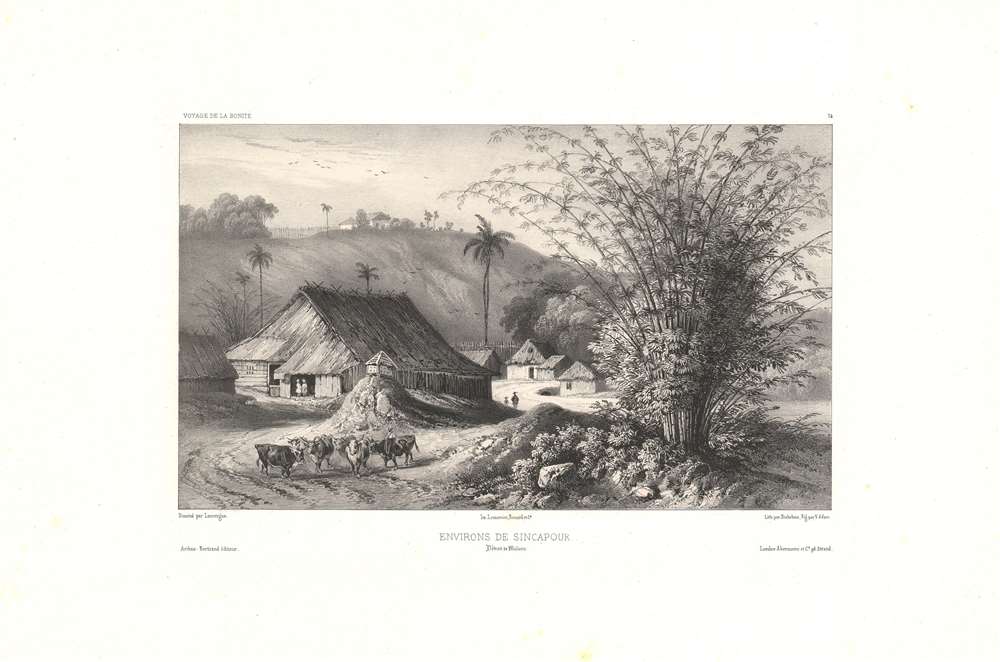 This is a rare c. 1845 chromolithograph of a rural scene in the early days of British Singapore by Barthélémy Lauvergne, one of the resident artists on the Bonite Expedition (1836 - 1837), a French scientific and diplomatic circumnavigation.

This view depicts a small village on the island of Singapore, which, according to the title, was located near the Strait of Malacca. Lauvergne's sketch was drawn on the island's west side, closest to the Strait. A bucolic scene presents a grouping of thatched-roof buildings in the foreground as well as on the hill in the background. Oxen amble in the foreground, while birds fly overheard. Human figures appear throughout and a religious structure stands to the left in the foreground. The large plant to the right in the foreground emphasizes the scientific nature of the Bonite Expedition and its contributions to botanical knowledge.

The French ship La Bonite undertook a voyage of scientific and geographic exploration in 1836 - 1837. Led by Auguste-Nicolas Vaillant (1793 - 1858), the voyage circumnavigated the globe, en route disembarking diplomats at various posts. Along the way, important observations were made that contributed to several fields, especially botany and zoology. A large account of the voyage was written upon the ship's return and divided into thematic volumes, including an album of drawings by the ship's artists, Théodore Auguste Fisquet and Barthélémy Lauvergne. The scientific expedition arrived in Singapore on February 17, 1837, and stayed through February 23. It is safe to assume that Lauvergne sketched this view during the expedition's brief stay.

The Early Days of British Singapore

Stamford Raffles founded Singapore as a British colony in 1819, looking for a site to challenge the Dutch, who had a colony at Melaka from which they threatened to dominate the Straits of Malacca. Finding a sparsely populated but strategically located island at the end of the Malay Peninsula with a natural deep harbor and ready supply of fresh water, Raffles intervened in a factional struggle in the Sultanate of Johor, which nominally controlled the island, supporting one faction in exchange for being granted the island. Raffles then made the critical decision to set Singapore up as a free port. From the beginning, Singapore witnessed rapid growth and high volume as a port, as well as the presence of a diverse set of cultures, including local Bugis and other Malays, Arab traders, ethnically Chinese (Peranakan) merchants, Indian traders and soldiers, Armenians, Parsis, Baghdadi Jews, and others.

This view was originally drawn by Barthélemy Lauvergne in 1837 and was published several years later as Plate No. 74 (of 100) in the Album Historique, a collection of maps and views prepared to accompany Auguste Nicholas Vaillant's Voyage Autour du Monde exécuté pendant les années 1836 et 1837 sur la Corvette la Bonite.. It was lithographed by Louis Bichebois with V. Adam, edited by Arthus Bertrand, and printed by the firm Lemercier, Benard et Cie. This view is very scarce to the market and is only independently cataloged in the holdings of the National Library of Australia and the National Library Board of Singapore, while the entire Album historique is cataloged in a small handful of European libraries.


Louis Philippe Alphonse Bichebois (April 14, 1801 – April 17, 1851) was a French engraver and lithographer who specialized in depictions of landscapes and studied under Jean-Baptiste Regnault and Jean-Charles-Joseph Rémond. Learn More...