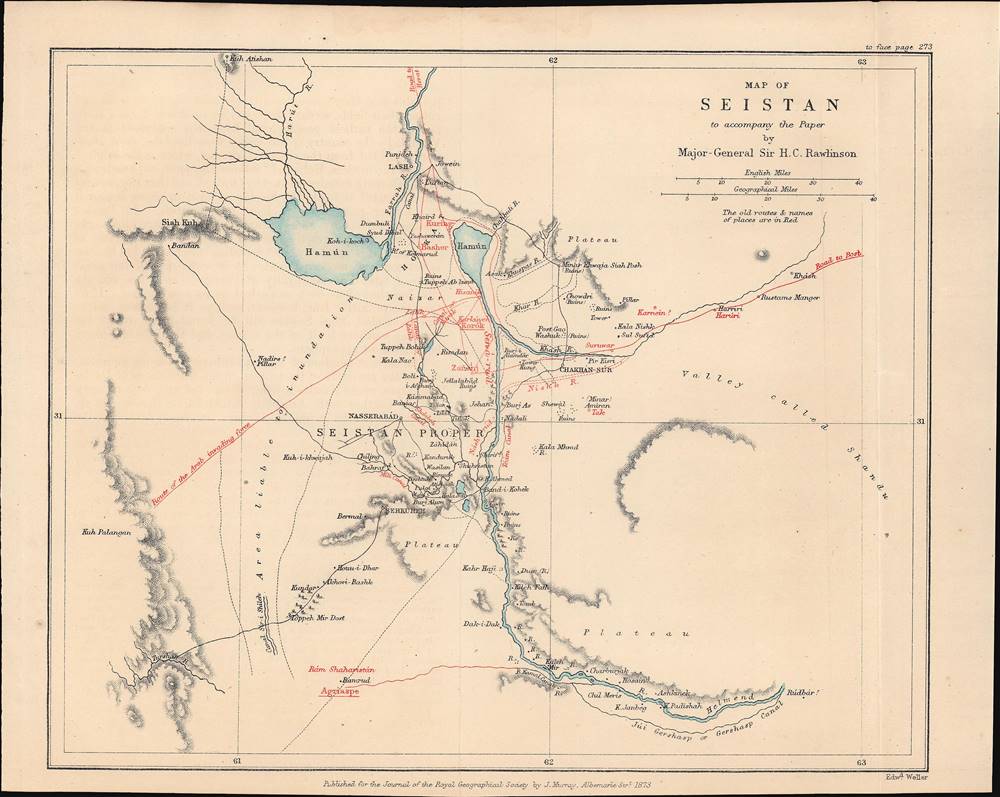 A guide to the historically and archaeologically rich region of Sistan.
$400.00

This is a rare 1873 Weller and H. C. Rawlinson map of Sistan (Seistan), on the border of modern Iran and Afghanistan near Baluchistan, Pakistan. It was prepared to illustrate the British intelligence officer, H. C. Rawlinson's, expedition into the region - a strategic reconnaissance in the Great Game. This region remains to this day little known and is rarely prested cartographically - this possibly being the only 19th-century specific map.

The most immediate feature is the hāmūn (shallow lakes or lagoons) at center. Hāmūn is a generic term for such lakes that form seasonally in the spring with snowmelt from nearby mountains; these lakes are the lowest points in the Sistan basin, and have in the past, during floods, merged into a single lake. For this reason, the naming of the hāmūn is inexact, and the lakes that form are referred to collectively as Lake Hamun, the Hamoun Oasis, Lake Sistan in Western sources, and Hāmūn-e Helmand in Persian (though it is sometimes subdivided into Hāmūn-e Helmand, Hāmūn-e Sabari, and Hāmūn-e Puzak.)

Historical references abound, including place names and ancient roads noted in red, such as the route of Arab armies which conquered the region in the mid-7th century and the roads to Herat and Bost (Lashkargah), historically major cultural and political centers.

Ancient ruins are indicated at several places, in black text instead of red. As naming and transliteration conventions had not yet developed, these ruins are in some cases difficult to identify. Also, Rawlinson's travels in the region predated some of the most important archaeological discoveries made in Sistan, most notably Dahan-e Gholaman, just west of the place named Band-i-Kohek here, and ancient ruins at Sukhteh (Sehkuheh here) found by Aurel Stein in the early 20th century.

History of the Region

Although little known outside of the Middle East, the Sistan region has been an important piece of and even heartland of several historical empires. The combination of rugged mountains and harsh, arid climate has necessitated clever environmental engineering. When canals and dams were well-maintained to manage winter rains and spring snowmelt, the Sistan Basin could thrive; when they were not, the water levels in the basin fluctuated widely between seasons, the reason for the 'area liable to inundation' here.

In times of drought the region could be consumed by the nearby desert, as happened to the settlement of Ram Shahristan towards bottom-left. In the early 21st century, the area suffered considerably after years of extreme drought, exacerbated by overirrigation and an influx of refugees fleeing from Afghanistan.

Sistan was religiously important in Zoroastrianism, and was known as Zranka to the Achaemenids, as Drangiana to the Greeks, as Sakastān to the Sassanians, and finally as Sistan to the Arabs. It was the homeland of the Saffarid dynasty (not to be confused with the later Safavid Dynasty), one of the first indigenous dynasties after the Arab conquests and conversion of greater Persia to Islam. Founded by an impoverished coppersmith turned warrior named Ya'qub ibn al-Layth al-Saffar who first fought for and then against the Abbasids, the Saffarids established a capital at Ya'qub's hometown, Zaranj (near center, though the modern city is located some distance from the medieval city of the same name). The dynasty was a short-lived but briefly large and powerful empire in the late 9th century, covering modern Afghanistan, most of Pakistan and Iran, and parts of Uzbekistan, Tajikistan, and Turkmenistan. Sistan subsequently fell under the rule or suzerainty of a string of outside powers, including the Seljuks, the Khwarazmian Empire, the Mongols, the Timurids, and the Safavids. A modern city also known as Sistan was renamed Zabol in the 1920s and, along with Zaranj, is the main urban center in the area.

The Context of Anglo-Russian Competition

'The Great Game' was a diplomatic confrontation between the British and Russian Empires over Afghanistan and other territories in Central and Southern Asia. The conflict, rooted in long-standing animosity between Russia and Britain, revolved around Afghanistan, which, while lacking significant resources of its own, was strategically situated. For its part, Russia feared Britain was making commercial and military inroads into Central Asia. Britain, conversely, feared Russia making gains in India, 'the jewel in the crown' of British Asia. The escalating tensions led to several wars and proxy wars: The First Anglo-Afghan War (1839 - 1842), the First Anglo-Sikh War (1845 - 1846), the Second Anglo-Sikh War (1848 - 1849), and the Second Anglo-Afghan War (1878 - 1880), along with the Russian annexations of Khiva, Bukhara, and Kokand. Then as now, Afghanistan proved a grinding stone upon which the world's great empires diminished themselves, none achieving a definitive victory despite committing staggering resources.

This map was made the same year that the British Sistan Boundary Mission wrapped up a years-long project to demarcate the border between Persia and Afghanistan, which had been a source of tension between the kingdoms for decades. In the context of the 'Great Game,' this dispute had significance not only for Persia and Afghanistan, but for Russia and Britain as well. In the early 20th century, a Second Sistan Boundary Commission (led by Henry McMahon, also known for his role in demarcating the borders between India and Tibet and for his efforts to orchestrate an Arab revolt against the Ottomans during World War I) worked to further clarify the border. As with many borders drawn in the late 19th - early 20th century, the Sistan border made little sense according to the social, linguistic, and cultural conditions of the region, and in this case also had little geographic justification, as the most logical natural boundaries, the Helmand and Farah Rivers, lie almost entirely on the Afghan side of the border.

This map accompanied an article in the Journal of the Royal Geographical Society written by H. C. Rawlinson. Rawlinson began his career as an army officer with the British East India Company, became proficient in Persian, and intensively studied several ancient languages. His career included multiple diplomatic and political appointments, including as a Member of Parliament, throughout which he continued his study and translation of ancient tablets and exploration of archaeological sites. Aside from being one of Britain's foremost experts on Persia, Rawlinson was also a vocal advocate for an aggressive foreign policy to counter Russian ambitions in Central Asia and the Middle East.

This map was drafted by Edward Weller and published by the firm John Murray. It appeared in 1873 in Volume 43 of the Journal of the Royal Geographical Society to accompany the article 'Notes on Seistan' by H.C. Rawlinson. It is only known to be cataloged as part of the holdings of Princeton University and is scarce to the market.