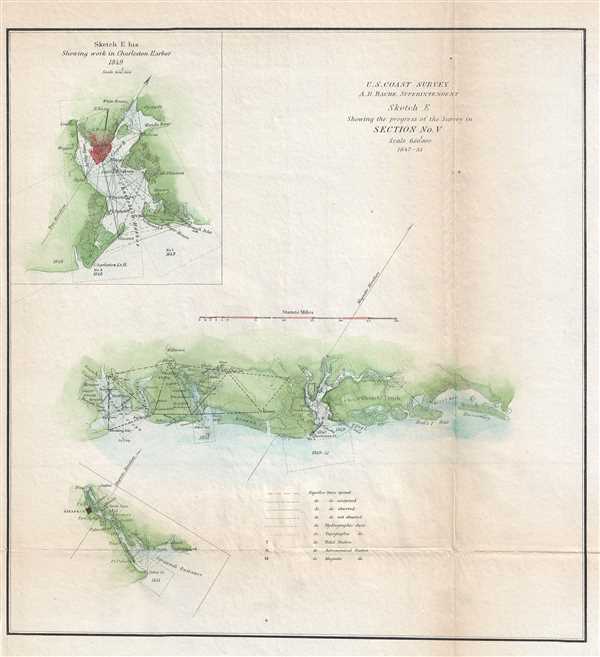 Includes inset maps of Charleston Harbor and the Savannah River.

This is an 1851 U. S. Coast Survey triangulation chart or map of the South Carolina coastline from Bull's Bay to St. Helena Sound including the North Edisto River and South Edisto River. The map focuses on the inlets and waterways, indicates lighthouses and important channels, and shows the progress of the survey work in this area by date annotated sections. Two of these sections have been enlarged and detailed in insets.

The inset in the upper left corner details the survey work in Charleston Harbor. It depicts the city of Charleston and notes navigation markers such as Sullivan's Island, Castle Pinekney, Mt. Pleasant, Ft. Johnson and Ft. Sumpter. The second inset in the lower left corner focuses on Savannah, Georgia and the Savannah River. The city of Savannah is illustrated and navigation markers such as Fort Jackson and Tybee Lighthouse are labeled.

This map was compiled under the direction of A. D. Bache, Superintendent of the Survey of the Coast of the United States and one of the most influential American cartographers of the 19th century. It was issued in the 1851 edition of the Superintendent's Report.