1860 U. S. Coast Survey Chart or Triangulation Map of the Florida Keys 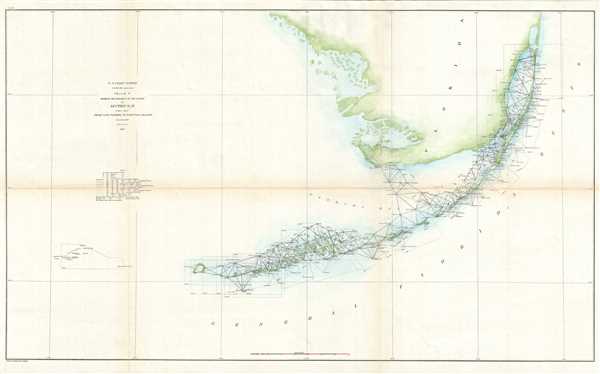 1860 U. S. Coast Survey Chart or Triangulation Map of the Florida Keys

Rare triangulation chart of Southern Florida and the Keys.

A very attractive example of the 1860 U.S. Coast Survey triangulation chart or map of southern Florida and the Florida Keys. Covers from Key Biscayne Bay south along the Keys, past Key West, as far as the Marquesas Keys. Countless triangulation points are noted throughout. Names each of the Keys and identifies Miami at the northern edge of Key Biscayne Bay, and the city of Key West, at the time a prosperous center of commerce. The chart was produced in 1860 under the supervision of A. D. Bache, one of the most influential and prolific Superintendents of the U.S. Coast Survey.