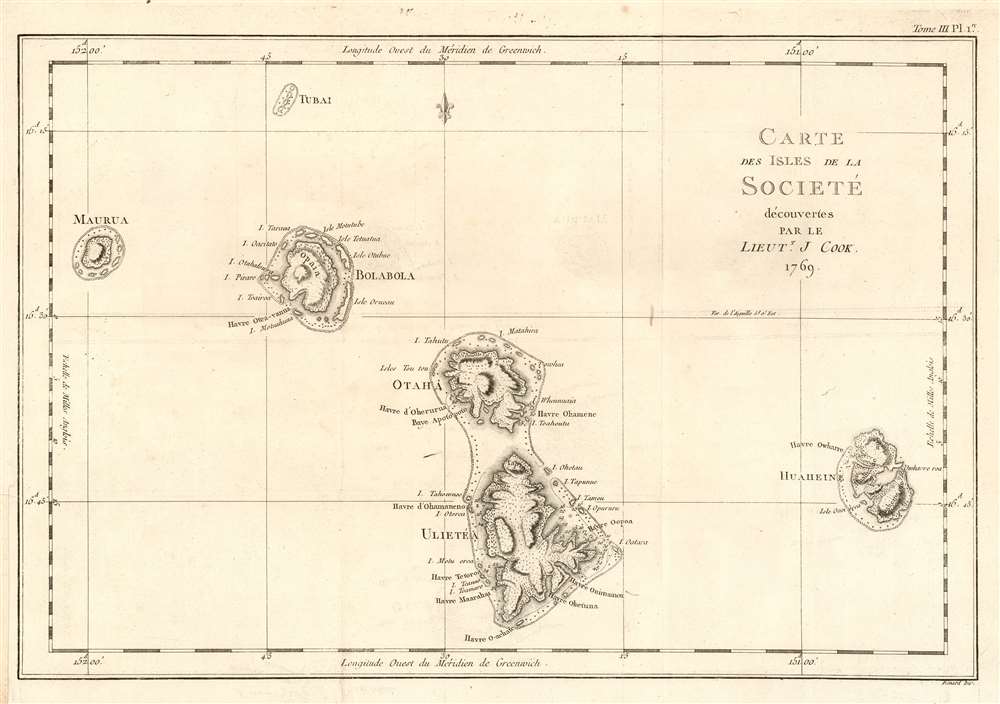 French Edition of the First Mapping of the Society Islands

This is a 1774 map of the Society Islands - the French edition of the first map revealing the exploration of these islands by then-Lieutenant James Cook during his first Pacific voyage. Now part of French Polynesia, the map shows the islands of Maupiti (Maurua on the map), Tupai (Tubai), Bora Bora (Bolabola),Tahaa (Otaha), Raiatea (Ulieta) and Huaheine. Cook's visit was the Islands' first contact with Europeans; Cook discussed in his journal the naming of the 'Society Islands:

'So call'd by the Natives and it was not thought advisable to give them any other names but these three together with Huaheine, Tubai, and Maurua as they lay contiguous to one another I have named Society Isles .'

Topography of each of the islands is shown pictorially, including reefs, mountains, and valleys. Depth soundings and anchorages are shown for Huaheine, Raiatea and Otaha. Engraved by Bernard for the 1774 French edition of John Hawkesworth's Account of the Voyages…, in which this was contained as Plate 1 in Volume III.

This map was engraved by Robert Bénard for the 1774 French edition of James Hawkesworth's Relation des voyages entrepris par ordre de Sa Majeste britannique actuellement regnante, an account of Cook's voyages. The separate engraving appears to be neglected by institutional collections, appearing only in the National Library of Australia. The full text is well represented in institutional collections.