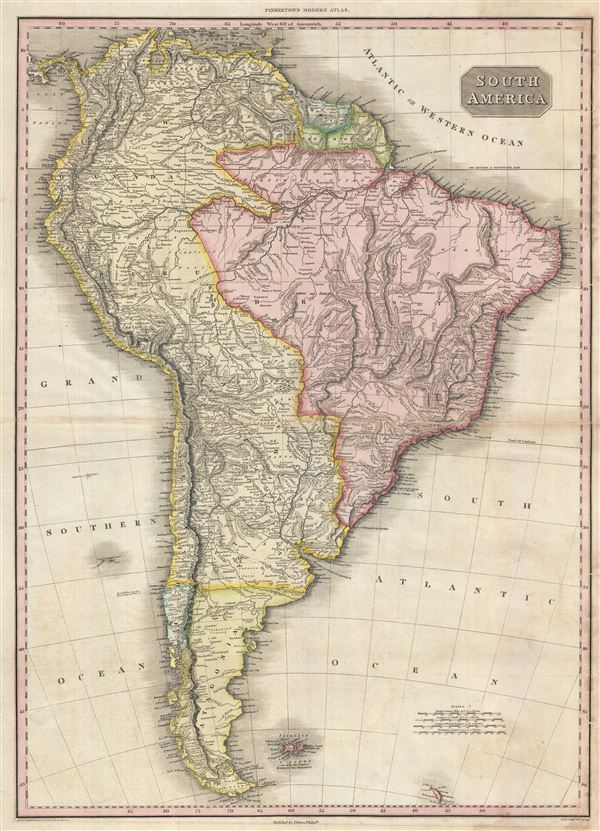 A significant advance in the mapping of South America.
$300.00

Cartographically speaking this is an often neglected part of the world - especially in the early 19th century. Though the coastlands and open plains had been well mapped early in the 17th and 18th centuries, the interior was rarely penetrated. The combination of mountainous terrain, daunting jungles, malaria, and unfriendly indigenous groups combine to make this area all but unexplorable - even today. Nonetheless, Pinkerton makes a commendable attempt to piece together early conquistador accounts, explorer's journals, missionary records, and indigenous reports into a coherent mapping of the area. In doing so he achieves a number of significant advances.

Probably the most interesting aspect of this map is Pinkerton's treatment of the apocryphal Lake Parima. Lake Parima was first identified by Sir Walter Raleigh in the 16th century - though he admittedly never saw the lake himself. Raleigh associated the lake with indigenous legends of Manoa and the supposed site of El Dorado. Many early maps actually show 'El Dorado' on the shores of Lake Parima, though Pinkerton curiously does not. However, his rendition of Lake Parima is vastly larger than most previous examples from the late 18th century - even those by other English cartographers such as Laurie and Whittle. The reality of Lake Parima and the Manoa is based upon Raleigh's misinterpretation of local trade networks. The Manoas were a river trading tribe based in the Amazon. Each year during the rainy season flooding on the Orinoco and Parima rivers would create a large flood plain and open channels of trade between the two otherwise unconnected regions. Raleigh misinterpreted these watery trade channels as a great lake.

This map's curious elements, however, do not end with Lake Parima. Pinkerton makes several bold attempts to map the various unexplored river systems of the region. He offers duly noted speculative courses for the Orinoco, the Maroni and the Rio Negro, among others. He also notes the sites of various battles and the bases of rebels and escaped slaves.

Pinkerton's map is also very interesting for its treatment of Xarayes. Traditionally cartographers identified the apocryphal Lake of Xarayes as the source of the Paraguay River. In earlier days, explores associated this lake with legends of Paradise, El Dorado, and the gateway to the Amazon. The lake itself, though never existed. Instead it was a misinterpretation of the vast Pantanal flood plain at the height of the rainy season. Here Pinkerton abandons the notation of a 'Lakes of Xarayes,' instead identifying numerous 'Lakes of Xarayes,' and in doing so come much closer to the truth. This is the first map to exhibit this change which is itself a significant advance the mapping of the Amazon Basin.

In general, this map reads like a litany of disappointment. The number if ruined towns, abandoned missions, forgotten mines, and destroyed settlements would be hard to match in any other map. Pinkerton notes the ruins of La Conception, St. Isabel, Santa Cruz de la Sierra, and Guadalcazar to name but a few. In the Andes, he identifies the sites of a number of important mountains and volcanoes including Aconcagua, Coquimbo, Petoroa, and others. He also identifies the site of the majestic ruined pre-Columbian city on the shores of Lake Titicaca.