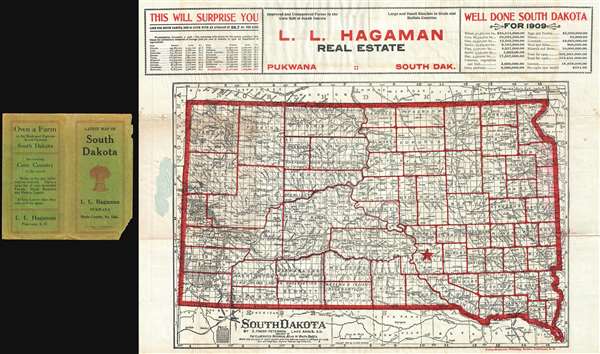 This is a rare 1909 land and settlement promotional map and early Dakota imprint map of South Dakota issued by E. Frank Peterson for L. L. Hagaman Real Estate of Pukwana. This is a fine example of the imagination and industry employed by real-estate promoters for these newly opened lands, who needed to create an image of prosperity and richness of services to promote the region to settlers from the Midwest and Eastern United States. The upper margins of the map include statistics advertising South Dakota's appeal for Ranching and Farming:

Improved and Unimproved Farms in the Corn Belt of South Dakota

Large and Small Ranches in Brule and Buffalo Counties

A star in Brule County indicates the site of Pukwana – the map's promotional focus. It is likely that this map is related to land speculation associated with the development of an extension line to the Chicago, Milwaukee and St. Paul Railway from Oacoma to the Black Hills – on which Pukwana was a minor stop. Real Estate sales in Pukwana must have been somewhat disappointing to Hagaman. As of the 2010 census, the population of modern-day Pukwana was just under 300.

This map was probably initially drawn by Peterson for his Illustrated Atlas of South Dakota and has here been repurposed with expanded promotional content and striking red overprinting by the Pukwana Press-Reporter Printing House (1908 – 1909). We are aware of no other examples of this map, as thus, but a similar map issued by Will A. Beach of Sioux Falls did appear in 1902, suggesting that Peterson sold the rights of his map to various local publishing houses for real-estate promotional purposes.

Eric Frank Peterson (1862 - c. 1939) was an American cartographer and homesteader active in South Dakota and Dakota Territory in the late 19th and early 20th centuries. Peterson was born in Minnesota but moved with his family to Dalesburgh, Clay County, Dakota, in 1878. In 1882 he and his family homesteaded in Charles Mix County, Dakota. At this time, he attended University at Vermillion. In 1884, he was elected Clay County Superintendent of Schools, a position that he held for 4 years. Around 1882, Peterson began working in cartography to supplement his income as a school teacher. He published several South Dakota state and county atlases as well as city plans, thematic maps, and regional maps. He also began studying law and was admitted to South Dakota Bar in 1899. His heath began to suffer in the early 20th century and in 1908 he relocated to Florida, from which he continued to publish and license his Dakota maps and even issue d a few maps of Florida. A year later in 1909, he moved again, this time to California, where he remained until at least 1939. Learn More...