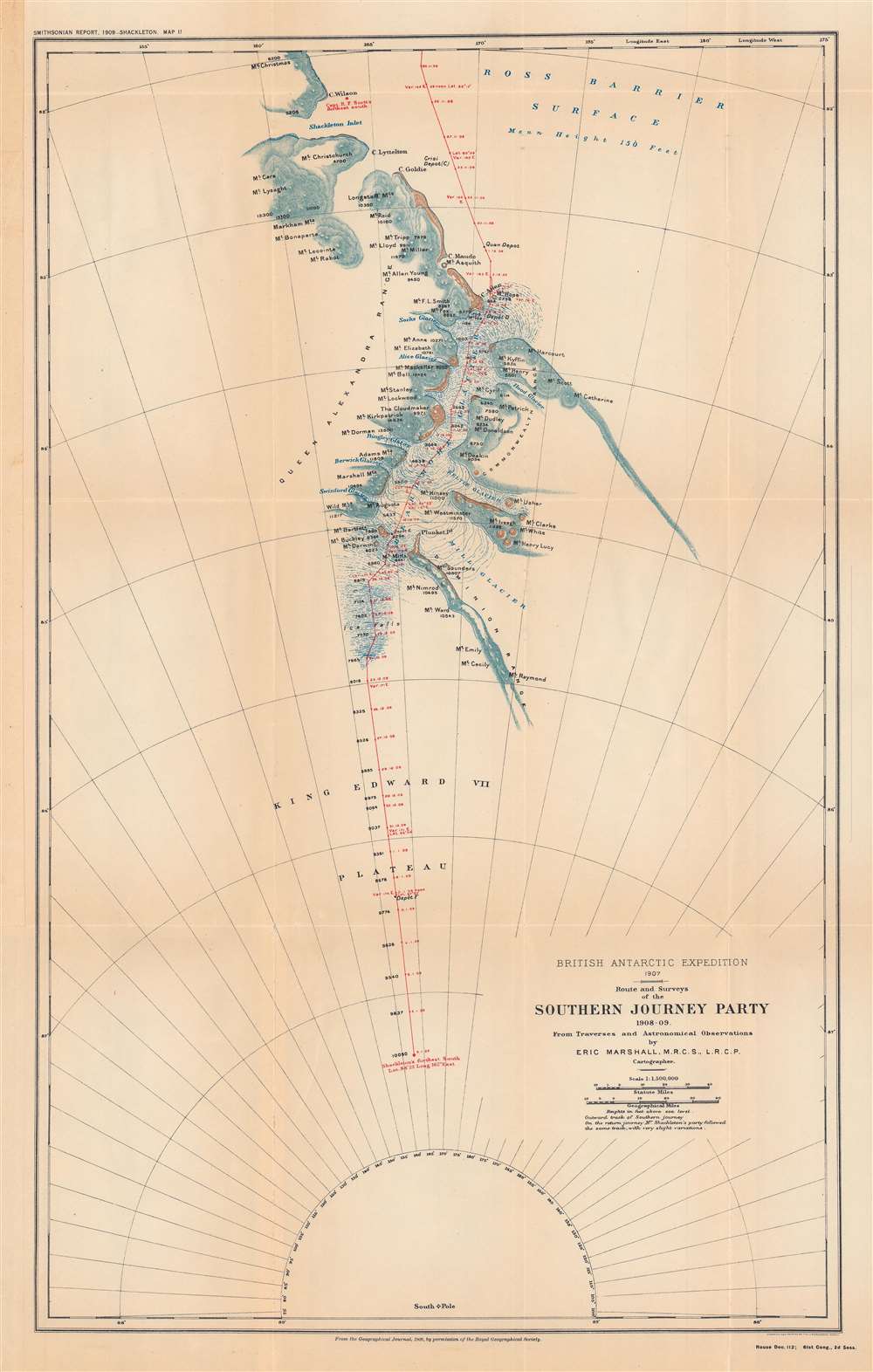 This map follows the main, southern, branch of the expedition which aimed to reach the South Pole in January 1909. A four-man group consisting of Shackleton, Jameson Boyd Adams, Frank Wild, and Eric Marshall, a surgeon who trained in cartographic methods before the expedition and produced this map. This group was initially accompanied by a team of Manchurian ponies to haul their equipment and rations, but they progressively died off and then men had to haul supplies, slowing down their progress. They were also hampered by poor weather and the fact that much of their route was through uncharted territory.

In late December 1808, with food running low, Shackleton tried to make a dash for the South Pole by reducing the supplies being carried, but it still was not enough, and the expedition had to turn back within 100 miles from their goal. The return journey was harrowing, with severely limited food supplies and the entire team falling ill, but they were eventually able to rendezvous with the Nimrod and return home. Shackleton's expedition has largely been forgotten as it was bested a few years later by Roald Amundsen's expedition, which did reach the South Pole, but it surpassed all previous Antarctic expeditions and returned all its members of alive, quite a feat in these early days of polar exploration.

Led by Ernest Shackleton, the British Antarctic Expedition of 1907 – 1909 was one of the most successful polar expeditions of its era, despite being a poorly funded and somewhat ad hoc undertaking. Shackleton had been a member of Robert Falcon Scott's Discovery Expedition to the Antarctic in 1901 – 1904 but was forced to return home early due to health issues. Harboring a grudge against Scott for this decision and wanting to prove himself, Shackleton sought out private backers for a return to the Antarctic. Despite having a much smaller ship than Scott's expedition and lacking the same level of official and royal support, Shackleton's expedition overcame tremendous difficulties and achieved several important discoveries. The expedition also tested innovative methods for navigating the harsh environment of the Antarctic. Despite its success and plaudits in the press, official and financial support from the government was tepid. Eventually, though, the expedition was lauded as one of the great successes of the 'Heroic Age of Antarctic Exploration.'

This map originally appeared in the The Geographical Journal of the Royal Geographical Society in 1909, and then was reprinted in a Smithsonian report to the U.S. Congress ('Annual report of the Board of Regents of the Smithsonian Institution... 1909'). This printing of the map is quite rare, only known to be held by the Illinois State Library, the Library of Congress, and the University of Reading, and has no known history the market, while the map as it appeared in The Geographical Journal is more widely dispersed.

Eric Stewart Marshall (May 29, 1879 – February 26, 1963) was a British Army doctor and Antarctic explorer who was a member of the 1907-1909 Nimrod Expedition led by Ernest Shackleton which reached the furthest latitude south of any expedition to that point. Beginning as a surgeon at St Bartholomew's Hospital, Marshall had a chance meeting in 1906 with Shackleton, who convinced him to undertake training, including in cartography, to prepare for an Antarctic expedition. He served in the Royal Army Medical Corps during the First World War, and continued to serve in the British military and government for the remainder of his career, before settling to a quiet retirement on the Isle of Wight. Learn More...