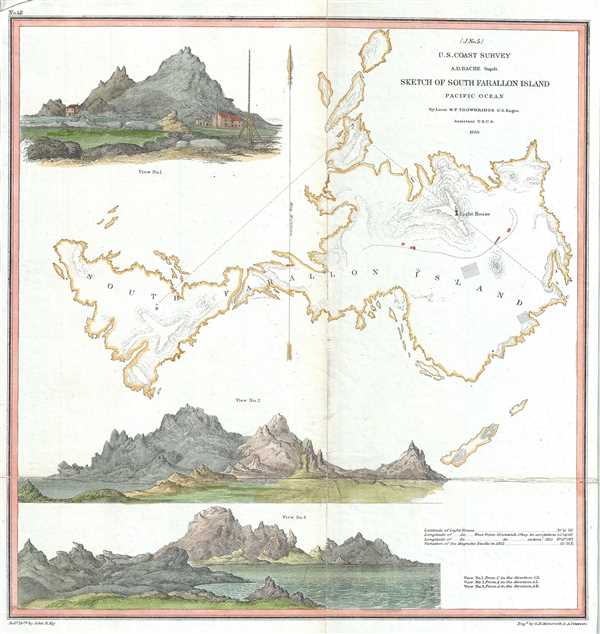 Chart of the Farallones, off the Coast of San Francisco.

An uncommon 1855 U. S. Coast Survey map of South Farallon Island, California. The Farallon Islands are a group of islands and sea stacks in the Gulf of the Farallones, off the coast of San Francisco, California, USA. They lie 27 miles (43 km) outside the Golden Gate and 20 miles (32 km) south of Point Reyes, and are visible from the mainland on clear days. In the mid-19th century the Farallon Islands were a cause of numerous shipwreck as inexperienced mariners, unused to the rocky outcroppings, transported Gold Rush emigrants by the thousands to San Francisco. In 1853 U.S. Coast Survey established a lighthouse on South Farallon Islands in hopes of curbing further shipwrecks – which is what this map is intended to present. The South Farallon light was only marginally successful and ships continued to wreck near the island well into the 20th century. This chart was made by Lieutenant W. P. Trowbridge under the superintendence of A. D. Bache, one of the most prolific and influential Superintendents of the U.S. Coast Survey.

Very good. Minor wear along original fold lines, with some damage visible near lower right quadrant. Professionally flattened and backed with archival tissue.
Looking for a high-resolution scan of this?