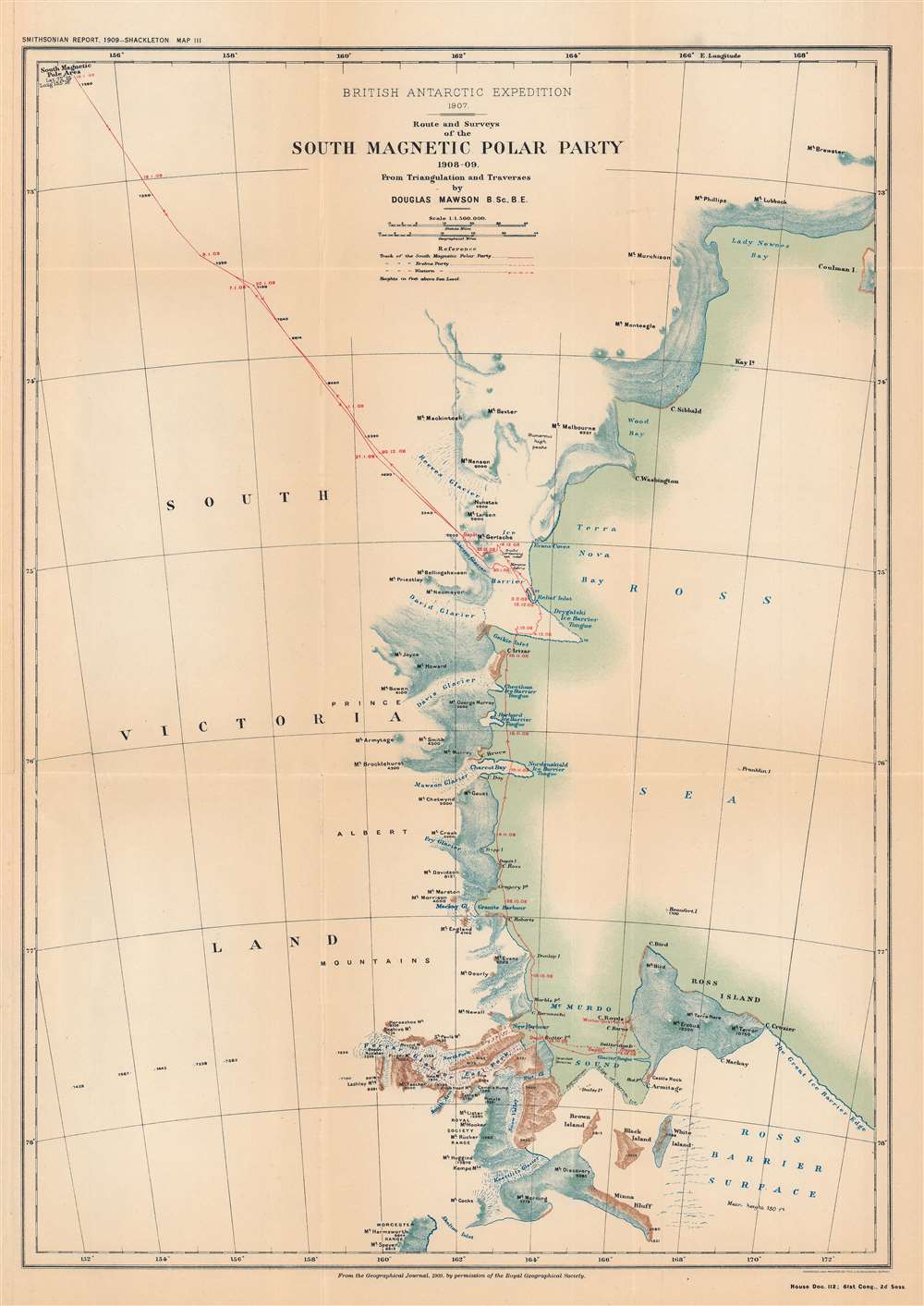 The first expedition to reach the South Magnetic Pole.

This map follows the northern branch of the expedition, which separated from the party led by Shackleton that nearly reached the South Pole in January 1909. Although their journey was relatively easier than the southern party, David's group (including Mawson, the cartographer for this map, and the surgeon Alistair Mackay) made slow progress in the extremely harsh climate and treacherous terrain. Between October 1908 and January 1909, they inched closer to the South Magnetic Pole, stopping regularly to take measurements and survey newly explored land. On reaching the pole, David claimed Victoria Land for the British Empire and planted a Union Jack. Exhausted and running short on food, the party almost missed its rendezvous with the Nimrod, but like the rest of the expedition was safely returned from the Antarctic.

Led by Ernest Shackleton, the British Antarctic Expedition of 1907 – 1909 was one of the most successful polar expeditions of its era, despite being a poorly funded and somewhat ad hoc undertaking. Shackleton had been a member of Robert Falcon Scott's Discovery Expedition to the Antarctic in 1901 – 1904 but was forced to return home early due to health issues. Harboring a grudge against Scott for this decision and wanting to prove himself, Shackleton sought out private backers for a return to the Antarctic. Despite having a much smaller ship than Scott's expedition and lacking the same level of official and royal support, Shackleton's expedition overcame tremendous difficulties and achieved several important discoveries, including reaching the South Magnetic Pole and nearly reaching the South Pole. The expedition also tested innovative methods for navigating the harsh environment of the Antarctic. Despite the expedition's success and plaudits in the press, official and financial support from the government was tepid. Eventually, though, the expedition was lauded as one of the great successes of the 'Heroic Age of Antarctic Exploration.'

This map originally appeared in the The Geographical Journal of the Royal Geographical Society in 1909, and then was reprinted in a Smithsonian report to the U.S. Congress ('Annual report of the Board of Regents of the Smithsonian Institution... 1909.'). This printing of the map is quite rare, only known to be held by the Illinois State Library and the Library of Congress, and has no known history the market, while the map as it appeared in The Geographical Journal is more widely dispersed.

Douglas Mawson (May 5, 1882 – October 14, 1958) was an Australian geologist and explorer who played an important role in the exploration of Antarctica in the early 20th century. He studied geology and mining before taking a professor position at the University of Adelaide. In 1907 – 1909, he joined Ernest Shackleton's Nimrod Expedition, which reached to the furthest south latitude of any expedition to that point. Mawson's party of the expedition was very successful, reaching the South Magnetic Pole and climbing Mt. Erebus. Afterwards, he was appointed to lead the Australasian Antarctic Expedition (1911–1914). Unfortunately, Mawson's two companions during that expedition perished. He led another expedition in 1929 – 1931 which claimed a significant portion of the Antarctic for Australia. Mawson's work and those of his colleagues led to many important discoveries about the geography, geology, and biology of the Antarctic. Learn More...