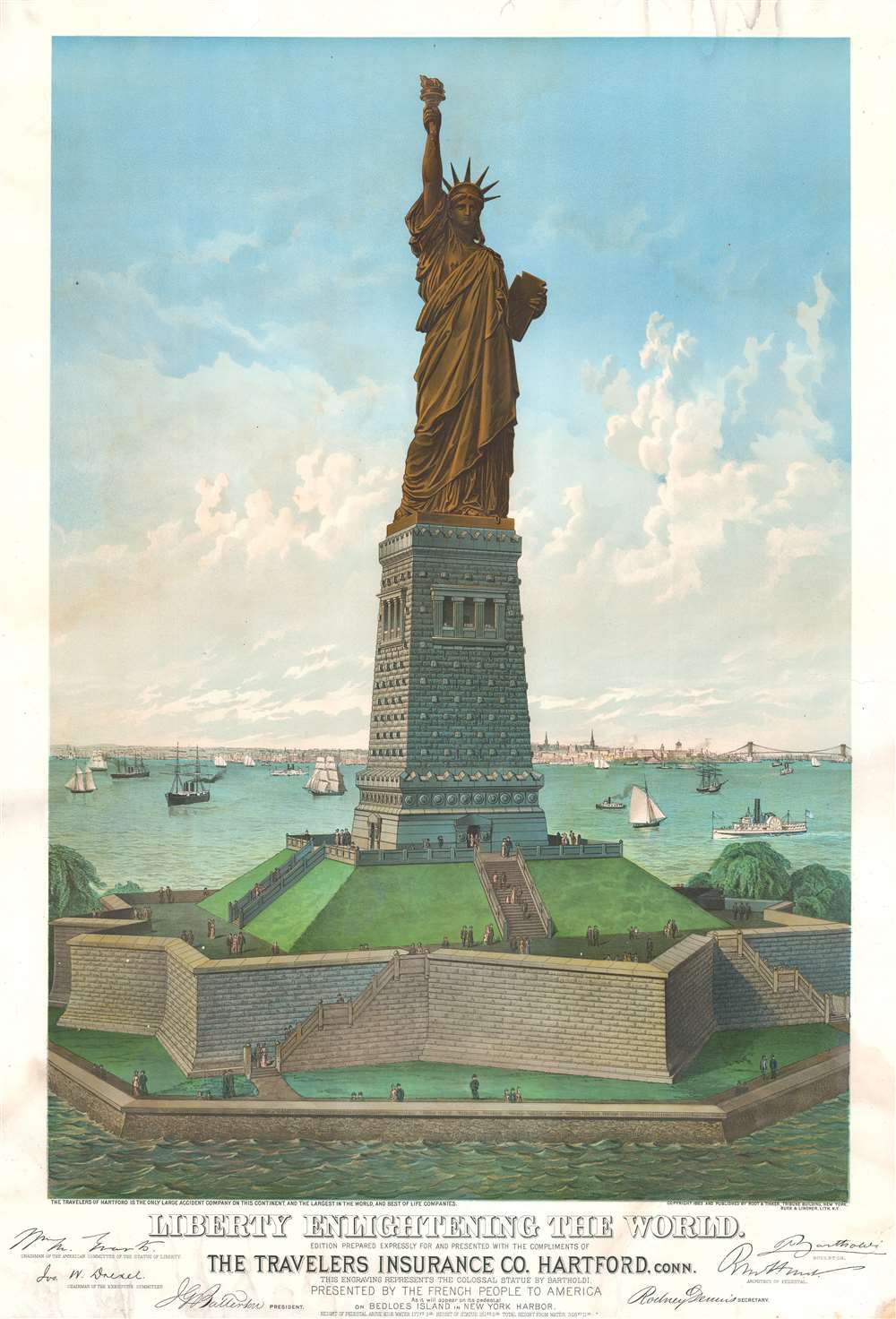 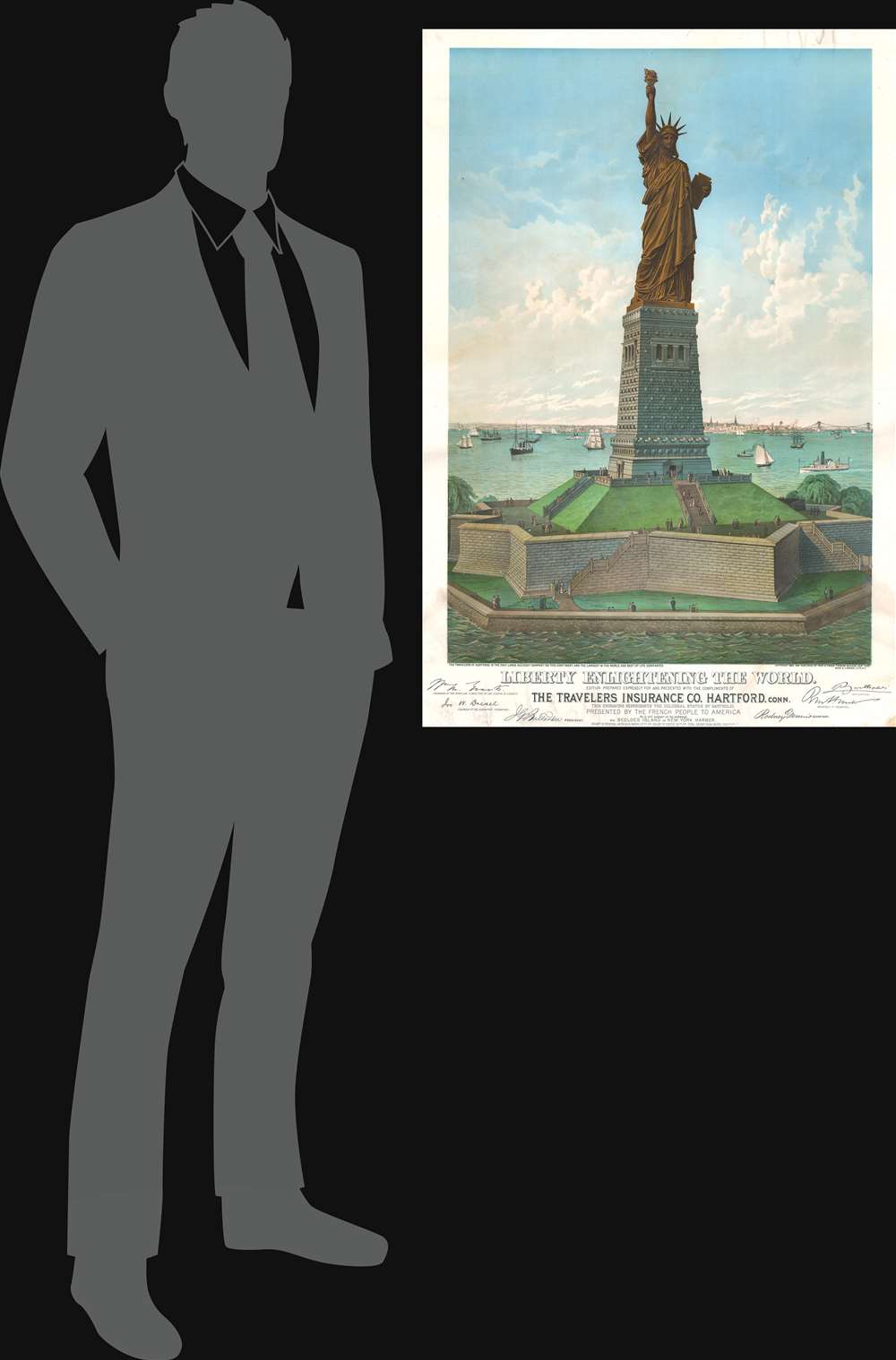 Chromolithograph pre-construction view of the Statue of Liberty.
$3,500.00

Liberty Enlightening the World. Edition Prepared Expressly for and Presented with the Compliments of Travelers Insurance Co. Hartford, this engraving represents the Clolooal Statue by Bartholdi, Presented by teh French People to America As it will appear on its pedestal on Bedloes Island in New York Harbor.
1883 (dated)     33 x 22.25 in (83.82 x 56.515 cm)

This exceptionally rare and stunning 4-color chromolithograph 1883 view of the Statue of Liberty is the most important pre-construction view of the statue and the first to receive official sanction. Issued 2 years prior to the Statue of Liberty's 1885 assembly and unveiling, this view illustrates the statue as seen from the south, looking north towards southern Manhattan and the Brooklyn Bridge, both of which are recognizable in the background. The image of the iconic statue here pre-dates the construction of the monument on Bedloe Island and is presented on one of Richard Morris Hunt's alternative plans rather than the base that was ultimately selected and constructed by the American Committee.

The Statue of Liberty was designed by Frédéric Auguste Bartholdi (1834 - 1904) and constructed by Gustave Eiffel (1832 - 1923). The gigantic statue was a gift of the people of France to the United States to commemorate the triumph of 'Liberty.' The statue's great copper arm was displayed at the Centennial Exposition in Philadelphia in 1876, and in Madison Square Park in Manhattan from 1876 to 1882. Nonetheless, funding the project proved difficult, especially in the United States. As late as 1885, construction of the pedestal was stalled until publisher Joseph Pulitzer backed a fund-raising initiative to complete the base.

This broadsheet view was described in the May 10, 1885 issue of Engineering News,

THE TRAVELLERS INSURANCE Co., of Hartford Conn have issued a chromo-lithograph of the proposed Statue of 'Liberty Enlightening the World' as it will appear when erected Bedloe's Island. This picture, which is work of art in itself and the finest we yet seen of the proposed Statue, is by the enterprising firm of Root and Tinker, of the Tribune Building, New York City and a credit to their good taste and business energy. The lithograph is endorsed by Statue Committee.

The First Officially Authorized View of the Statue

This is, as noted, the first officially authorized lithograph view of the Statue of Liberty. It was issued on behalf of the Travelers Insurance Company of Hartford, Connecticut by the publishing firm of Root and Tinker. Signatures of the statue designer, Bartholdi, and the base designer Richard Morris Hunt (1828 - 1895), as well as the signatures various committee members associated with the erection of the statue in New York Harbor, including Joseph W. Drexel, Chairman, J. G. Betterson, President, William M. Evarts, Chairman of the American Committee, and Rodney Dennis, Secretary.

This view was drawn and prepared by the New York firm of Root and Tinker on behalf of the Travelers Insurance Company of Hartford, Connecticut. It was engraved in 4-color chromolithograph by the firm of Buek and Linden, of New York City. There are multiple variants of this view, some embracing a narrower field of view, others in just black and white, and still others without the background view of New York City. The present example, in stunning full color - is the rarest and most deluxe issue.

Root and Tinker (fl. c. 1870 – c. 1896) was a New York City based publisher of trade journals, prints, broadsides and trade cards active in the later part of the 19th century. The company was founded by the owner of Root Newspaper Association and son of composer George Frederick Root, Charles Towner Root (November 9, 1849 - December 13, 1938), along with Franklin H. Tinker (1852 - 1890), and his father Henry F. Tinker (1826 - 1889). They initially issued journals for a variety of trades including the millinery industry, the upholstery trade, the pharmaceutical trade, and the clothing business, among others. Their broadsides reflected interests of their clientele, often extolling the heads of their respective industries. They often worked with Buek and Lindner lithography to engrave and print their publications. The firm reached its height in the 1880s, but with the death of Henry Tinker in 1889 and his son, Franklin Tinker, in 1890, the firm shifted focus. While Root, now a sole owner, continued to publish under the Root and Tinker imprint into the early 1890s, he had other visions. In 1889, Root and Tinker good over the retail trade journal, Dry Goods Economist. The publication was geared towards department store managers and proved highly influential in developing American merchandising theory. In the early 20th century, Root took the firm in yet another new direction with a focus on textile printing, renaming Root and Tinker as the 'Textile Publishing Company.' Shortly there after the name changed again this time to 'United Publishers.' He continued to manage the company until he retired in 1924. By this time Root had acquired great wealth, owning elegant mansions in New Jersey and Maine, as well as a grand townhouse, which still stands, at 309 West 92nd Street in Manhattan. Learn More...


Gustav H. Buek (August 20 1850 – February 8, 1927) was an American lithographer of German descent active in the latter part of the 19th century. Buek was born in Boston, Massachusetts and moved to Brooklyn, New York as an infant, where he lived the rest of his life. He apprenticed with Hatch and Company, Lithographers of New York. After his apprenticeship, in 1866, he took work with Donaldson Brothers, for whom he headed their art department. In 1881, partnering with F. H. Linder, he founded the firm of Buek and Linder with an office at 65 Warren Street, New York. Linder retired in 1884, after which Buek changed the name to G. H. Buek and Company and took on a new partner, Léon Marié. They also moved to more spacious office at 146-150 Center Street. In 1891, G. H. Buek and Company they merged with the American Lithograph Company. He is credited with being the first to introduce facsimile watercolor work to commercial lithography. Buek was a member of New York City's Salmagundi Club. At the time of his death, Buek was also the president of the Alco-Gravure Company, which printed gravure sections for twenty-seven newspapers across the United States. After suffering from poor health for several years, Buek journeyed to New Mexico with his wife and a nurse in the hope that climate would improve his condition. Unfortunately, his condition did not improve and he died in Albuquerque. Buek was also a noted art connoisseur and philanthropist. His 'remarkable collection' included paintings, china, and glassware. Buek married his wife Louise Valentine in 1873 and they were married for fifty-four years. Learn More...