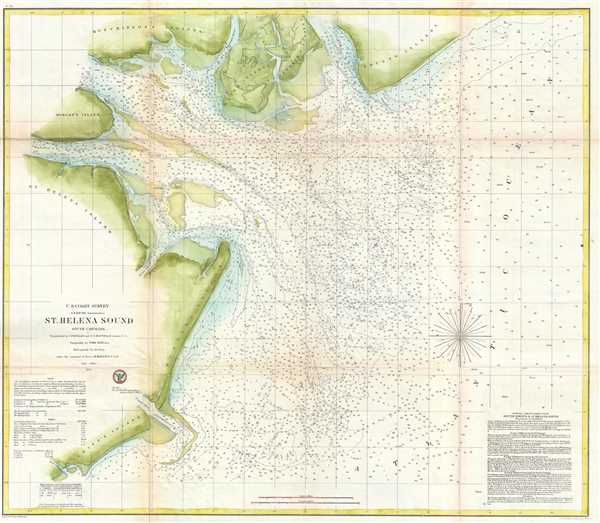 One of the earliest American nautical charts to specifically detail this region.

This is an 1857 U.S. Coast Survey nautical chart or maritime map of St. Helena Sound, South Carolina. The map depicts from the Edisto Islands south past Morgan Island and St. Helena Island to Fripp's Island and Skull Inlet. The map features countless depth sounding and shading to indicated shoals and other undersea dangers. Sailing instructions, as well as a note on the dangers present, for South Edisto and St. Helena Sound are situated in the lower right corner, while notes pertaining to the practical use of the chart, the tides, and the position of the light vessel are located in the lower left corner.

Saint Helena Sound is a coastal inlet connected to Beaufort and Colleton counties. The Combahee River empties from the Northwest and the Edisto River and Ashepoo River from the North. Today the Intracoastal Waterway crosses the sound. This chart offers some of the Coast Survey's earliest work in this region.

Very good. Blank on verso. Minor toning on original folds. Verso repair and reinforcement along original fold lines.
Looking for a high-resolution scan of this?