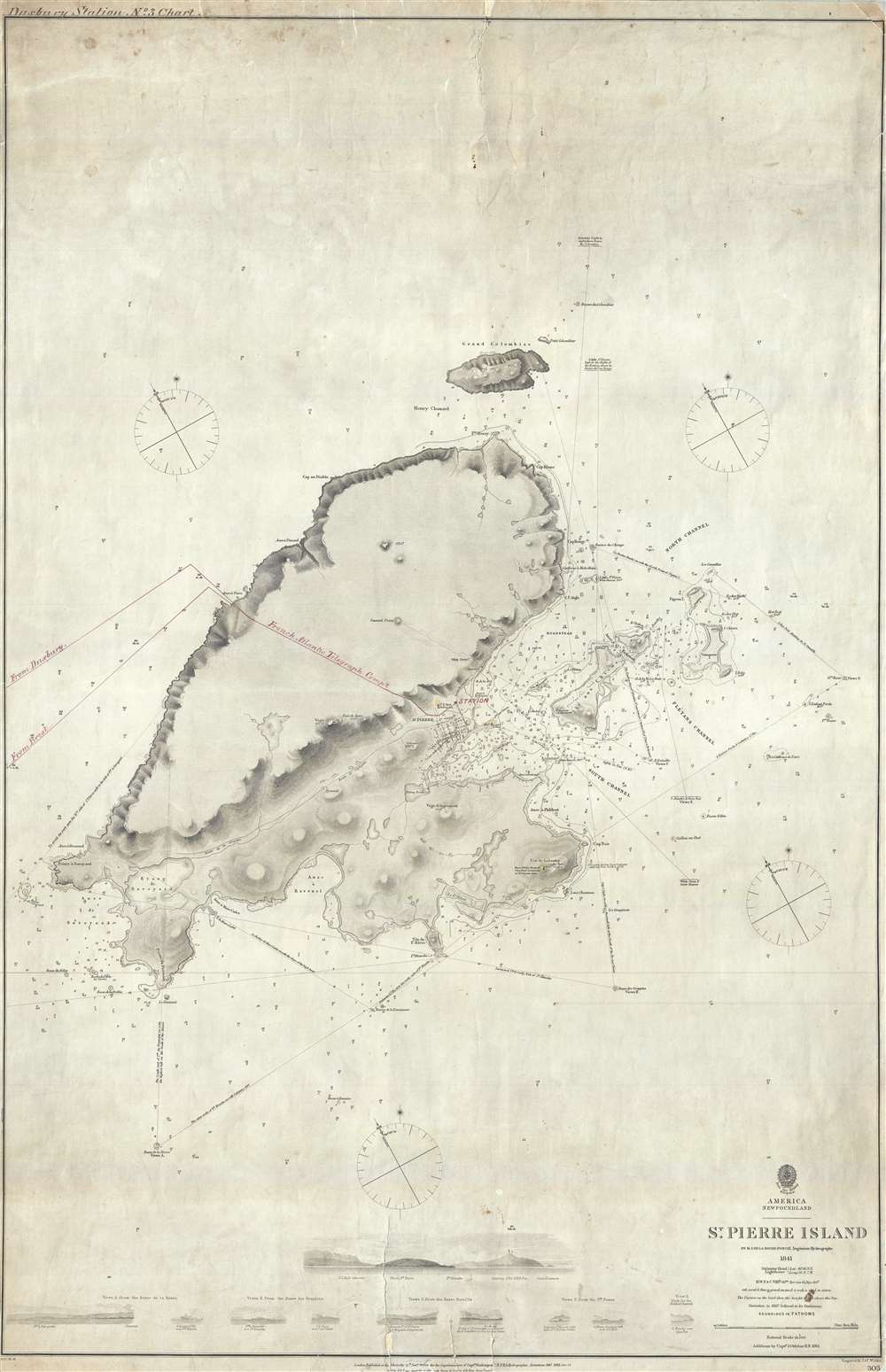 The finest map of St. Pierre Island in the mid-19th century with manuscript notes relating the French Atlantic Telegraph.
$950.00

An exceedingly rare 1861 map of the France's last colony in North America, the tiny island of St. Pierre of the coast of Newfoundland, with manuscript additions related to the French Atlantic Telegraph Company. This chart covers all of St. Pierre Island as well as the adjacent islands and the surrounding seas. The harbor community of St. Pierre is detailed with individual streets and buildings recognizable. This map is noteworthy not only for its rarity but also for the manuscript addition of the course of the French Atlantic Telegraph.

French Atlantic Telegraph Company (La Société du Câble Transatlantique Française) was founded in 1869 with the objective of laying a transatlantic cable independent of British territories. The corporation defined a route from Brest, France, to the St. Pierre Island in the Miquelon Group, and then to Duxbury near Cape Cod. The complexation of the French line, only the second such telecommunication line laid, undercut the British monopoly and transatlantic communication and dramatically changed the cable market. Given that this was the finest map of the region available when the telegraph was being laid, and that it bears manuscript notes relating to the telegraph, it is likely that this map was used in the telegraph's construction or management.

This map is based upon survey work completed by the French hydrographer Ferdinand Antoine Jules de la Roche-Poncié in 1841. It features various updates and revisions completed by Captain J. Orlebar of the Royal Navy in 1861. The map was published by the British Admiralty and engraved in England by J. and C. Walker. Although there are references to this chart in various Admiralty chart catalogs from the 1860s through 1870s, we are aware of no other surviving examples.


Ferdinand Antoine Jules de la Roche-Poncié (August 19, 1810 – March 30, 1881) was a French hydrographic engineer and cartographer active throughout the 19th century. Poncié was born in Vauxrenard, France. After graduating from the École Polytechnique in 1829 he joined the French navy, becoming a naval hydrographic engineer in 1832. Numerous important French surveys bear his name, including the first detailed hydrographic survey of the St. Pierre and Miquelon Islands, and numerous maps of East Asian waters. He received the Legion of Honor in 1841, ultimately attaining the grade of Commander. In 1860 he settled in Paris where he became a member of the Hydrographic Committee under Rear-Admiral Pierre Mathieu. He died in Paris in 1881.