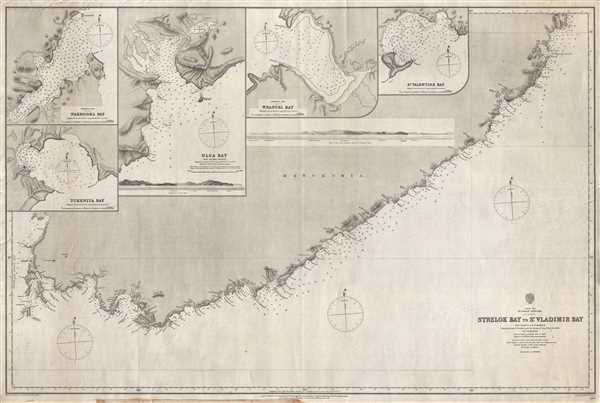 This is a rare 1868 Admiralty nautical chart or maritime map of the Pacific coast of Russian Manchuria, just east of Valdivostok. The map depicts the coastline in great detail from Nakhodka to St. Vladimir Bay (Zaliv Vladimira). Numerous locations are labeled along the coast, including several points, islands, rivers, and smaller bays. Depth soundings are noted all along the coast, with the highest concentration around St. Vladimir Bay and America Bay. Four inset maps are situated in the upper left corner, depicting Tcheniya Bay, Nakhodka Bay, Olga Bay, and Wrangel Bay. Each of these inset maps include numerous depth soundings along with several identified locations. A profile view of the coastline between Olga Bay and St. Vladimir Bay is also illustrated.

This map was produced and published by the Admiralty in 1868 from surveys conducted by Lieutenant C.J. Bullock under the direction of Commander J. Ward. Additional information was acquired by consulting a Russian chart published in 1863.

Very good. Soiling to lower margin but does not effect printed area. Blank on verso.
Looking for a high-resolution scan of this?