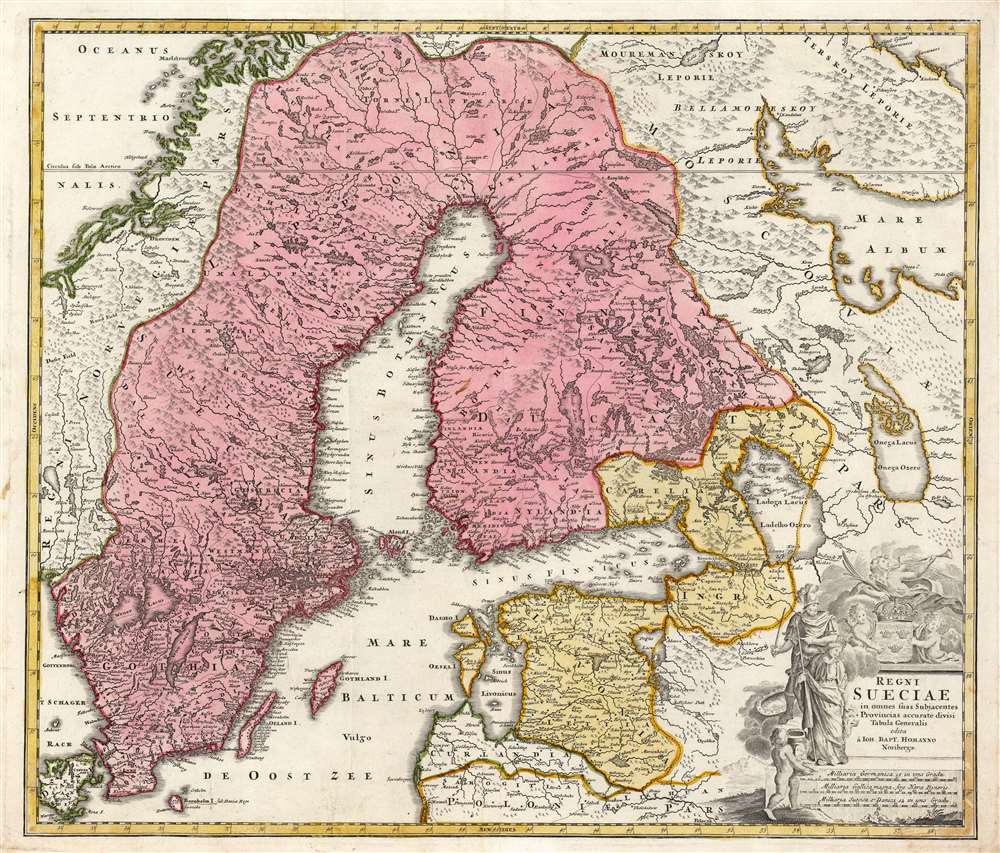 This is Johan Baptist Homann's map of the Kingdom of Sweden, bringing what was the dominant mapping of Sweden and its neighbors up-to-date with the events of the Great Northern War. Homann starts - almost certainly - with Frederic de Wit's 1680 Regni Sueciae but adds detail and placenames that did not exist prior to the 1700–1721 Great Northern War between Sweden and Russia, and particularly before the 1703 capture of the island of Kotlin by Russia from Sweden, the 1703 Russian capture of Nyenskans, and the foundation of the city of St. Petersburg. Also marked is the town of Schlisselburg, formerly Oreshek, which was captured by Russia in 1702 and renamed by Peter the Great during his administrative reforms. An earlier iteration of this map appearing in a 1716 example of the Atlas Novus includes Petersburg and Kronschloss (formerly Kotlin) but does not name Schlüsselburg. That placename would be included in Ingermanland Governorate in 1710 and would in 1727 become part of Sankt-Petersburgsky Uyezd. Many city names have been underlined in an old hand, and, in some cases, placenames have been added. For example, the Finnish city of Wekelax (Veckelax) has had inscribed above it the name 'Fridrichsham.' The city, as originally named on the map, had been burned by the Russians in 1712. Following the peace of 1721, the city was rebuilt, and renamed after Sweden's new King Frederick I.

This map was produced during the 1700–1721 Great Northern War between Sweden and Russia and captures a period in which Sweden was losing ground in the conflict - particularly in the region of the Gulf of Finland, and the city of St. Petersburg. The dotted, engraved border between Russian and Swedish territory is preserved here from (most likely) De Wit's 1680 Regni Sueciae Tabula Generalis, which showed the extent of Sweden's acquisitions as of 1654 or thereabouts. But the original wash and outline color here highlights areas which were, at best, contested - and many of which were, by the time this map was published, securely Russian. Livonia, Ingria, and Karelia are here no longer Swedish, and although surrounded and colored in the red associated with Swedish Finland on the map, the newly founded city of Petersburg is clearly marked. Despite early victories in the Northern War, by the time this map was published there was little to be celebrated by the Swedes.

In the lower right is an attractive cartouche. Two putti display the Swedish three-crowned arms, and a winged victory, or fame, blows her horn overhead. Ares and Minerva look on from the side, having not yet entirely forsaken Sweden (despite Charles XII's crushing 1709 defeat at Poltava, which almost certainly predated this map). We confess bafflement at the child with a plate of fish in the foreground.

The cataloging of this map is wildly inconsistent in terms of its dating. Many libraries list it with a date of 1702, despite the clear presence of the city of Petersburg. This is not credible: in 1703 Peter and Paul Fortress had only just been laid down. Tsar Peter would move his capital from Moscow to Saint Petersburg in 1712, and the very first plan of the city would not be published until 1717.

Moreover, the waters are muddied by the existence of no fewer than five maps, printed from four different plates, all with the same title, all attributed to Homann, although several of these appear to be pirated maps, copying the Homann down to its Imperial Privilege. The earliest credible date we associate with one of these is 1715. An example of that map in a second state appears in a 1716 Homann atlas. Our example is likely to have been colored shortly after the 1721 peace and is unlikely have been printed prior to 1717. The map would appear to be well represented in institutional collections, but given the pig's breakfast presented by the inconsistent cataloging of this map, it is impossible, short of the examination of each cataloged example in person, to determine the prevalence of one plate of this map over another.