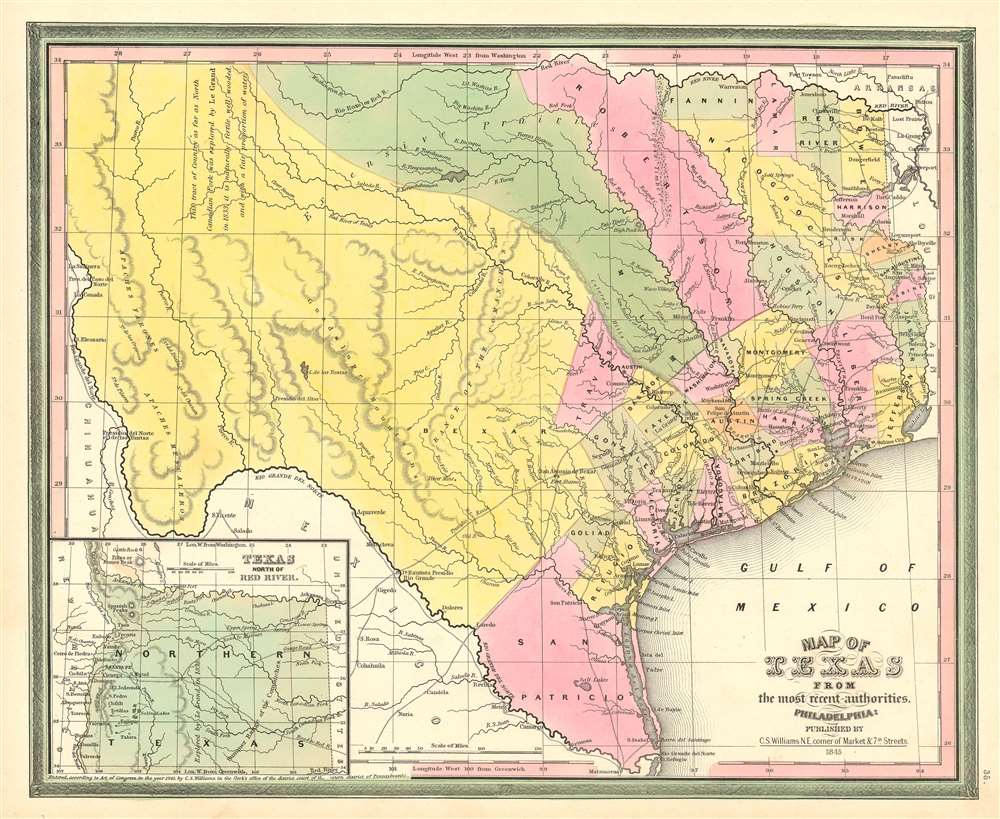 Map of Texas at the moment of Annexation.

A rare 1845 / 1846 first edition example of the C. S. Williams / J. H. Young / S. A. Mitchell map of Texas published in the final days of the Republic of Texas just at Texas was preparing to join the United States. Coverage includes Texas at its fullest extent, reaching from the Santa Fe and the Rio Grande del Norte to the Sabin River and extending as far north as the Arkansas River (plus a stovepipe encompassing the Green Mountains not fully illustrated). Northwestern Texas is incorporated via an inset in the lower left.

The Republic of Texas was a short-lived nation-state established in March of 1836 when it ceded from Mexico. Following the independence of Mexico from Spain, the American Stephen Fuller Austin lead a group of 300 Empresarios to settle Texas, near Austin, where they received a grant from the Mexican government. As more Americans moved to Texas, resentment and strife began to build between the American settlers and Mexican authorities. This and other factors ultimately led to the Texan Revolution in 1835 and the declaration of Texan independence in 1836. Texas remained an independent republic until it joined the United States 10 years later in 1846.

The Republic of Texas Borders

This is the first edition of J. H. Young, S. A. Mitchell, and C. S. Williams' 1846 map of Texas, dated 1845. Engraved by James H. Young in 1845, this map features the elegant border work added by Carey and Hart after their takeover of the Tanner's Universal Atlas. In the same year, the plates were acquired by S. A. Mitchell, who issued several variants of the map for the first editions of his own historic atlas, this being the first. The map would soon be significantly updated with new counties and Mitchell's own strapwork border late in 1846.

C. S. Williams (1800 - 18??) was an American engraver and publisher active in Philadelphia during the middle part of the 19th century. Williams is elusive and we have been unable to definitively isolate much information about him. He may have been born in New York. He engraved for Her Schenck Tanner (1796 0 1858) and his imprint and copyright is associated with several important Tanner atlas maps issued between 1845 and 1846. Similarly, his imprint carries over to Tanner legacy maps issued by Samuel Augustus Mitchell (1792 - 1868) maps until about 1850. There are references to an engraver by the name of C. S. Williams in New Haven, Connecticut, active in the 1830s, as well as to a C. S. Williams active in Ohio from around 1850, where he published a various city directories, including one for Cincinnati, Columbia, Dayton, Zanesville, Stubenville, et al.. There is also a C. S. Williams identified as a Surveyor and Land Agent in Iowa City, Iowa, c. 1858. It is unclear if these are the same person, or, completely unrelated individuals. Learn More...