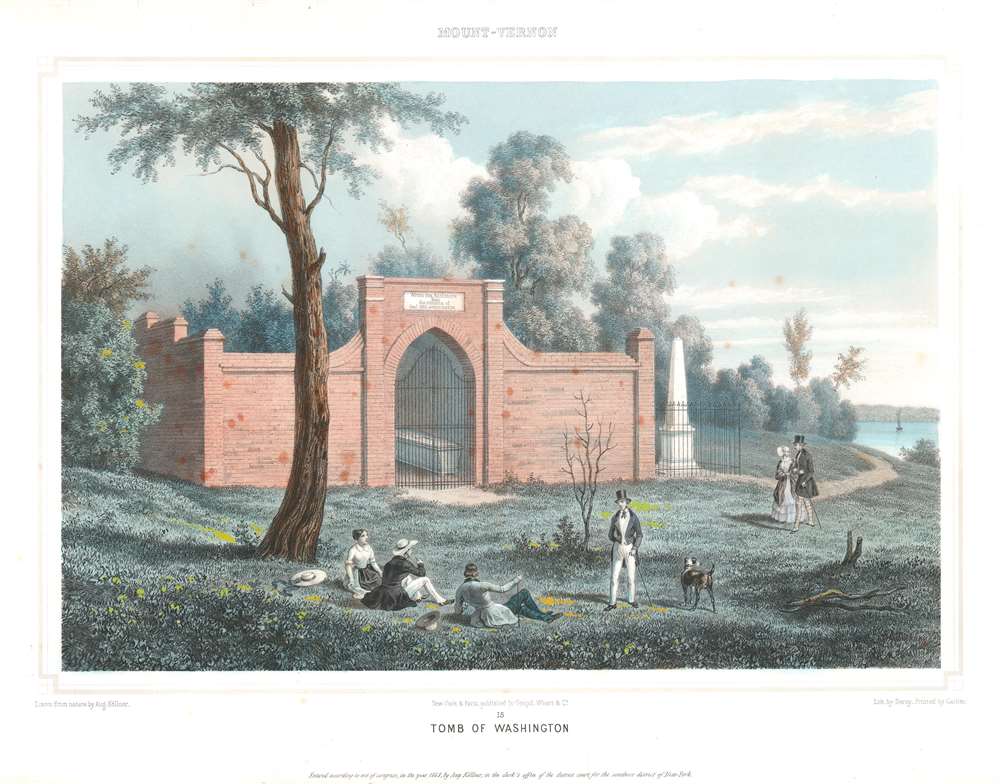 This is an 1848 Augustus Köllner view of George Washington's tomb at Mount Vernon, Virginia. Depicting the New Tomb at Mount Version, the tomb's brick façade dominates the view, and the inscription above the archway is legible and reads 'Within this Enclosure Rest the remains of Genl. George Washington.' Washington's marble casket is seen through the steel gate barring entry to the tomb. A white obelisk (described as a marble shaft by Mount Vernon) appears to the right and was erected in memory of Bushrod Washington, a proprietor of Mount Vernon. Two men and one woman are illustrated lounging under a tree and are seen conversing with another man in the foreground. A couple strolling through the ground are seen further back, and the Potomac River can just be seen along the right side.

The Tomb of George Washigton

Washington directed its construction in his will, stating that

The family Vault at Mount Vernon requiring repairs, and being improperly situated besides, I desire that a new one of Brick, and upon a larger Scale, may be built at the foot of what is commonly called the Vineyard Inclosure…In which my remains, with those of my deceased relatives (now in the old Vault) and such other of my family as may chuse to be entombed there, may be deposited.

The new tomb was completed in 1831, and Washington's surviving heirs moved his remains, along with those of Martha and other relatives, into it. In 1832, the centennial of Washington's birth, Congress attempted to have Washington's remains moved to a crypt under the Capitol. However, the proprietor of Mount Vernon, John A. Washington, likely influenced by a request by the legislature of the Commonwealth of Virginia, did not consent to Congress's request.

This view was drawn by Augustus Köllner, lithographed by Laurent Deroy, printed by François Louis Cattier, and published by Goupil and Vibert in 1848. It was Plate 15 in Köllner's 'Views of American Cities', a series of fifty-four plates issued between 1848 and 1851.

Augustus Kollner (1812 - December 10, 1906) was an artist, engraver, and lithographer based in Philadelphia. Born in Wurttemberg, Germany, Kollner began his career in Germany, working as a book illustrator in Stuttgart and Paris in the late 1820s and 1830s before immigrating to the United States in 1839. After settling in Washington, D.C., Kollner worked as a lithographer for the Haas firm, working on advertisements, bank notes, and city views. He moved to Philadelphia in 1840 and tried unsuccessfully to establish himself as a portrait painter. After this misstep, Kollner became the second chief artist of P.S. Duval and William Huddy's 'U.S. Military Magazine' (1839 - 1842). Throughout the 1840s, Kollner worked as a lithographer for many different Philadelphia based lithographic firms, including Duval, J.T. Bowen, Frederick Kuhl, Thomas Sinclair, and Wagner and McGuigan. Between 1847 and 1848, Kollner began working for the lithographic firm Brechemin and Camp, for whom he designed all genres of lithographs and advertised his own lithographic views based on his annual summer sketching trips along the East Coast. His work also began to be published in the seminal series 'View of American Cities', published between 1848 and 1851 by Goupil, Vibert, and Company. While working for Brechemin and Camp, Kollner was responsible for creating the multi-foot Dripp's map of New York City. Kollner established his own firm in 1851 and worked on a wide range of projects, including advertisements, labels, city and landscape views, and maps. During the Civil War, Kollner enlisted in the cavalry in 1863 and later sold photographic reproductions of the etchings he did as a soldier. He produced his last series of landscape lithographs entitled 'Bits of Nature' in 1878, but focused mostly on his watercolor work during the late 1870s. Kollner retired in the early 1880s, but continued to make sketching trips around the Philadelphia area. Kollner married Mary Sheek (c. 1821 - 1899) in 1843, and they had several children, three of which survived infancy: William, Clara, and Josephine. Kollner died on December 10, 1906.


Isidore Laurent Deroy (1797 - 1886) was a French artist, lithographer, and draughtsman. Born in Paris, Deroy studied under Cassas and Félix. His lithographs were displayed at the Paris Salon from 1827 until 1866. He produced lithographs of a diverse array of subjects and published an innumerable amount of views. He taught his two children Emilie Deroy and Auguste-Victor Deroy his trade.


François Louis Cattier (May 4, 1796 - 18xx) was a French printer active during the mid-19th century. Born n Paris, he ran Madame Motte's printing firm and then bought its inventory to start his own firm. He invented the eidography printing process. His oeuvre focuses on portraits of politicians and landscapes. He worked for Goupil and Vibert, as well as their English and American associates. He retired to Belleville in 1856. Cattier was married and had children.


Jean-Baptiste Michel Adolphe Goupil (March 7, 1806 - May 9, 1893) was a French publisher and seller of art and prints during the 19th century. Born n Paris, he founded the company Goupil et Cie, which became one of the world's biggest art dealers during the 19th century. Goupil founded his first company in 1827 and then partnered with Henry Rittner (1802 - c. 1840), another Parisian print dealer, in 1829. Rittner disappears in 1840. Goupil found a new associate, Théodore Vibert (1816 - 1850), between 1841 and 1842 and the firm become Goupil, Vibert et Cie. Beginning in 1848, Goupil and Vibert embarked on an ambitious plan to create a worldwide network of associated dealers and opened branches in London and New York. Vibert died in 1850 and left several children, whom Goupil looked after. Starting in 1846, Goupil began to move away from dealing exclusively in prints and began buying and selling paintings. Over the next few decades, Goupil's firm became one of the largest art dealers in the world. Goupil, who lost two sons during his lifetime, slowly began to withdraw from working in 1884 and his associate Léon Boussod (1826 - 1896) took over the business in 1886 and renamed it 'Goupil et Cie - Boussod, Valadon et Cie successeurs'. The firm continued to operated until Vincent Imberti bought the company's archive in 1921.


Théodore Vibert (1816 - 1850) was a French printer publisher. Vibert joined the Goupil et Cie firm in 1842 and the firm became Goupil, Vibert et Cie. While Vibert was working with Adolphe Goupil (March 11, 1806 - May 9, 1893), the firm greatly expanded its activities and created a global network of alliances linked to its headquarters in Paris.

George Washington's Mount Vernon EV-4357/RP-645.
Looking for a high-resolution scan of this?