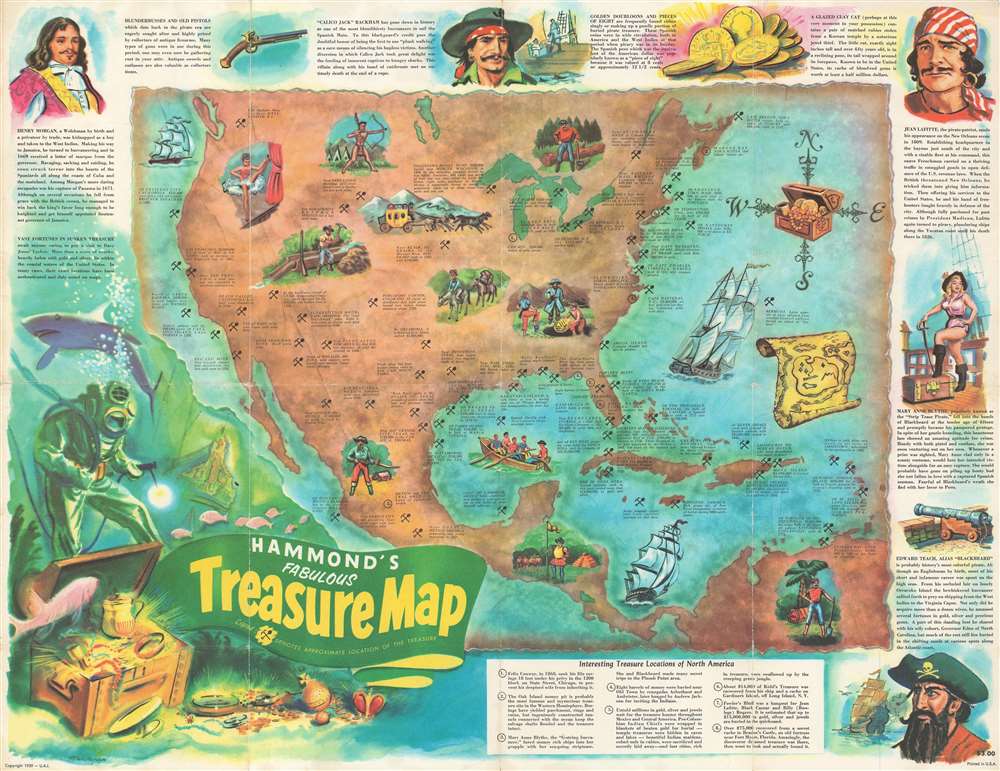 Entices the adventurous with the suggestion of buried treasure and lost fortunes, and of course 'X' marks the spot!
$200.00

This is a 1959 Chuck Mazoujian pictorial treasure map of Central and North America. The map depicts the region from the Pacific Ocean to the Atlantic Ocean and from southern Canada to northern South America. As this is a treasure map, numerous different tales of lost treasure are referenced here, each of which provides a location and the amount of money supposedly hidden there. Each location is marked by a shovel and pick axe set in the form of and 'X', with the exception of eight, which are numerically identified. These eight locations are the 'interesting treasure locations of North America' and a more detailed story is recounted for them in an index situated along the bottom border. Among the treasures referenced is loot buried by notorious outlaws, such as Jesse James and John Dillinger, lost mines, and numerous shipwrecks. Pirates are profiled around the border, including Blackbeard, Mary Anne Blythe (known as the 'Strip Tease Pirate'), Jean LaFitte, and Henry Morgan.

This map was drawn by Chuck Mazoujian and published by C.S. Hammond and Company in 1959. Two examples are present in institutional collections at Yale University and the Library of Congress. We are aware of only a handful of examples that have appeared on the private market.

Charles John 'Chuck' Mazoujian (August 24, 1917 - January 14, 2011) was an American artist and cartoonist. Born in New Jersey, Mazoujian attended the Pratt Institute in Brooklyn and graduated in 1939. After graduation he began working at the Eisner and Iger studio on comics, and, after that partnership dissolved in 1940, followed Eisner to the new studio he started. While working for Eisner, Mazoujian created the comic strip 'Lady Luck', which debuted on June 2, 1940 and ran through May 11, 1941. He enlisted in the army on January 31, 1941 and served as an illustrator, with his work appearing in both official Army manuals as well as in civilian publications like Life Magazine. After the war, Mazoujian also taught figure drawing and painting at the Pratt Institute. In the early 1960s Mazoujian took a position as an illustrator for the New York advertising firm Ogilvy and Mather. His paintings appeared in the American Watercolor Society shows and Society of Illustrator shows, and he continued to paint until his death. Mazoujian married Edna Monson of Bay Ridge, Brooklyn, in 1942 and the couple had two children. Learn More...