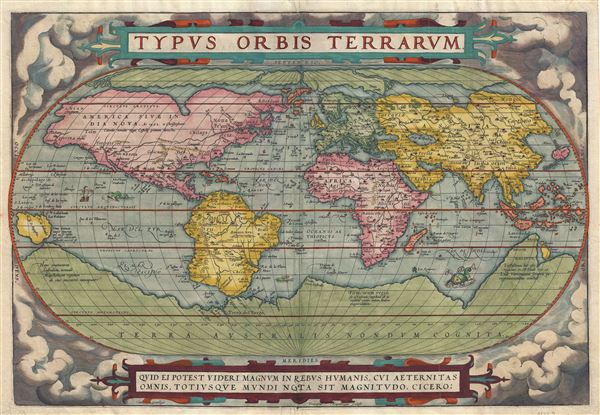 The first map of the world in a standard Atlas - of fundamental importance to the history of cartography.

A fine first edition third printing example of Aberham Ortelius' iconic 1570 map of the world. This map is the first map of the world to appear in a standard atlas and is thus of fundamental importance to the history of cartography. Centered on the Atlantic Ocean, the map, naturally, covers the entire world from pole to pole. The general presentation of an oval projection derived from earlier maps by Appianus and Bordonius. Cartographically it is derived from the world of Gerard Mercator (1569), Gastaldi (1561), and Gutierrez. On the verso, Ortelius mentions in his Catalogus Auctorum that he also apparently had access to and drew upon the world maps by Peter ab Aggere of Mechelen, Sebastian Cabotus of Venice, Laurentius Fries of Antwerp, Jacobus Gastaldi, Gemma Frisius of Antwerp, Guicciardinus of Antwerp, Doco ab Hemminga Frisius, and Orontius Fine of Paris.

Our survey of this important map will begin in North America. Much of the continent is unexplored but here Ortelius has roughly followed the work and forms laid down by Gerard Mercator in 1569. Beyond known colonial centers in central Mexico and the West Indies, the cartography is largely speculative. The eastern seaboard juts noticeably eastward - a product of inaccurate measurements of longitudes and magnetic variation. No trace is to be found of the Mississippi River despite its c. 1540 discovery by Hernando de Soto and Moscoso. Place names north of Mexico nonetheless generally correspond to American Indian centers discovered by De Soto (east of Texas) and Coronodo (west of Texas). In the northeast the results of voyages of exploration of Giovanni de Verrazzano and Jacques Cartier are much in evidence with the St. Lawrence being clearly if exaggeratedly represented. The mythical kingdom of gold Norumbega is identified along the Atlantic coast roughly in the vicinity of the Penobscot River. Of the Great Lakes, there is as yet no trace. Some have suggested that the inlet in the northern Polar Regions, which is derived from Mercator's Lake Conibus, may suggest some knowledge of the great lakes long before their discovery - but this is the purest speculation. The Chesapeake Bay has yet to be discovered. The Pacific Northwest is almost entirely speculative, with the apocryphal kingdoms of Anian (derived from Marco Polo's writings), Quivira (a kingdom of gold associated with Coronodo expedition and located near modern day Kansas, but for some reason here relocated to the west coast), and Tolm (again derived from Polo). The curious inclusion of Polo's references in maps of North America underscores the fact that even in the late 16th century, European cartographers remained uncertain regarding the relationship between Asia and North America.

South America is most notable for the large bulge that appears on the western coast in the vicinity of modern day Chile. This anomaly appeared in the earliest editions of several Ortelius maps and was corrected in the 1585 second state of this map. Ortelius derived the error from Mercator, who may have had difficulty reconciling conflicting reports from Spanish navigators. At the very tip of South America the Strait of Magellan gives way not to Tierra del Feugo but to the sprawling apocryphal continent of Terra Australis - see below. Further north we can clearly discern the Rio de la Plata and of course the Amazon River - which was tentatively known from the ill-fated Orelana Expedition. Several known centers are mapped including Lima, Quito, Cusco, and Caracas, among others.

The southern Polar Regions are dominated by the vast apocryphal continent of Terra Australis. Terra Australis was a long speculated upon landmass supposedly situated in the southern hemisphere. The theoretical basis for the continent dates to the writings of Aristotle, who taught that the globe must be in balance - so as the Americas counterbalanced Europe and Africa, another undiscovered continent must counterbalance Asia.

While Ortelius' map pre-dates the official discovery of Australia in 1606 by Dutchman Willem Janszoon a large promontory extending northwards from Terra Australis is highly suggestive of the western coast of the southern continent. The lands of Maletur and Beach (from the travel account of Marco Polo) are noted along the coast. Most likely Mercator extracted information about Australia from the Dieppe Maps, which were believed to have been derived from secret now lost Portuguese maps. The recognizable form of Western Australia is far too apparent to ignore the likelihood that Europeans had been visiting Australia from at least the mid-16th century. A small island just west of the Proto-Australian promontory is identified as Java Minor. Ortelius, working from Mercator, extracted the idea of Java Minor from the cosmographic speculations Marco Polo. Apparently a scribal error in Book III of Polo's travels substituted Java for Champa (Vietnam), thus located Java Minor (in fact Sumatra) well into the latitudes of Terra Australis. Attempting to rectify the inconsistencies, Mercator thus added the island of Java Minor to the proto-Australian promontory.

Asia offers much of interest. The Black Sea is oriented to the east-west, a typical error of the period. Japan is mapped as a globular mass with Miaco (Mecao), clearly identified. There is no sign of Korea. Of the Great Wall there is no mention. The East India islands are typically garbled. Sumatra is recognizable but Java takes on a bulbous form. Borneo has been elongated and the whole has been absorbed into the Philippine Islands, some of which are recognizable, especially Mindanao.

Africa follows a standardized form with two major river systems, the Nile and the Niger dominating the continent. The Nile here roughly follows the Ptolemaic model and extends well into southern Africa. Since this map predates most missionary work in Abyssinia, the Blue Nile is here no better mapped than the White Nile. The Niger on the other hand follows a roughly correct path eastwards but fails to make its southward bend to connect with the Bite of Biafra. The mapping here suggests that river communication through the continent may have been possible. This ambition would later prove impractical.

While there are many curious islands scattered throughout the map, most associated with questionable reports from little-known navigators, two stand out. Situated due east of Florida a tiny island is identified as 'Sept Citiz,' but better known as Antilla. It was said that when the Moors invaded Porto in the early 8th century, the city's seven bishops took all of their wealth and fled to sea. They landed on an island in the Atlantic called 'Antilla.' There, each of the seven bishops established a city. The island of Antilla actually appears on many early portolan charts of the Atlantic. It is typically a rectangular island, usually but not always set on a north south axis, with seven deep bays, each of which holds a magnificent city.

Another island of interest, labeled 'Y de S.Bo,' appears just northeast of South America. Better known as St. Brendan's Island, 'Y de S.Bo' appears in texts as early as the 9th century. According to the legend, St. Brenden was and Irish monk who, along with his confederates, sailed westward into the Atlantic in the hopes of evangelizing to undiscovered island peoples. Some claim that Brenden made it all the way to Newfoundland in the 6th century, on the way discovering his namesake island. Traditionally the island is located to the west of the Canaries, where it is called the 'Eighth Canary Island,' and it appears only to the Blessed, earning it another name, 'the Isle of the Blessed.'

Along the bottom of the map there is an apt quote by Cicero, in translation, 'Who can consider human affairs to be great, when he comprehends the eternity and vastness of the entire world?.'

This map was engraved by Franz Hogenberg, whose imprint appears in at bottom center. The Hogenberg imprint is removed from subsequent issues. The 1571 Latin edition of the Theatrum Orbis Terrarium, from which this map was extracted, was printed in 275 copies. How may have survived today we have no way of knowing.