1684 Cantelli / De Rossi Map of the Ukraine and Crimea 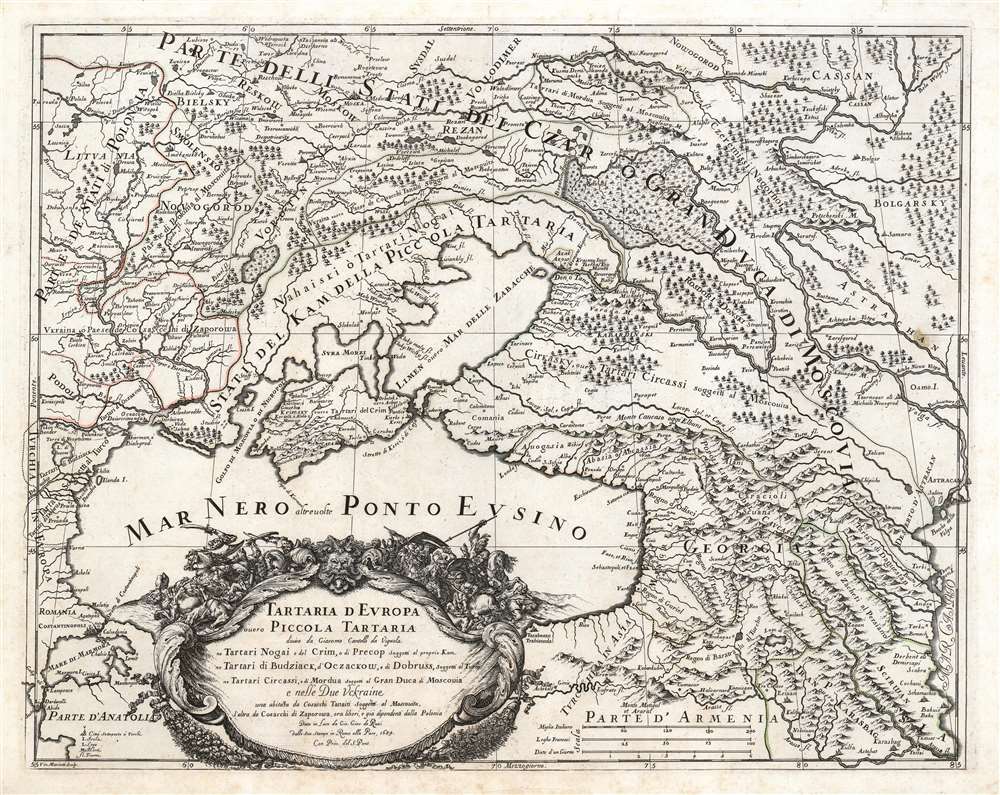 1684 Cantelli / De Rossi Map of the Ukraine and Crimea

This is a rare 1684 Cantelli da Vignola map of the Caucasus, the lands of the Circassian and Crimean Tartars, Georgia, and Ukraine. The region - peopled by an array of Tatar and Cossack tribes - was largely under the domination of the Crimean Khanate and the Nogai Horde, but represented a borderland contested by the Grand Duchy of Muscovy and the Turkish Empire.

The region surrounding the lower Dnieper River is here identified as Ukraina ó Paese de Cosacchi di Zaporowa, that is to say the country of the Zaporozhian Cossacks. As recently as the end of the sixteenth century, these were considered subjects of the Polish-Lithuanian Commonwealth, at least to the extent that they chose to raid the Ottoman Empire, as Tatars subject to the Ottomans raided the Commonwealth. Indeed, in 1615 and 1625 the Cossacks were burning Constantinople's suburbs, forcing the Sultan to flee. Following the Polish-Ottoman War of the 1670s, the famed intransigence of the Zaporozhian Cossacks were immortalized in the justifiably long-lived, hilarious literary forgery of the Correspondence between the Ottoman Sultan and the Cossacks.

The map captures the region during the dual regency of Peter (the Great) and his elder brother Ivan, with power in the hands of their half-sister Sophia Alekseyevna (1657 - 1704). She wrested the regency from Peter's mother in a temporarily successful bid to prevent Peter from bypassing his brother and inheriting the throne. Between 1682 and 1689, Sophia ruled as an autocrat behind her puppet brothers. Despite her canny political sense, and the support of the Streltsy, her reign was marked and weakened by unsuccessful efforts to defeat the Crimean Khanate, who raided southern Russia with impunity. It was not until the 1690s that Peter, as Tsar, captured the fortress of Azov from the Crimean Khan Tatars and the Ottoman Sultan, thus taking control of the Don River. On Cantelli's map, Azov is marked with the symbol of the crescent, signifying its allegiance to the Turkish Empire.

Cantelli was notable for his efforts to reconcile conflicting modern and classical information. According to Chikobava, (2006) the place names employed in the vicinity of Georgia, particularly the Principalities of Odishi and Guria, indicate that Cantelli's map reflected the conquest of Guria by Georgian leader Levan II Dadiani (1611 - 1657). Thus, despite many map features being drawn from antique sources, Cantelli also updated his work with recent data. This would have been significant, as the region's primary characteristic is one of turmoil: the allegiances, territorial holdings, and borders were in constant flux.

The place name Sevastopol appears in two different forms on this map, and in two separate locations. Sixteenth and seventeenth century maps show a Black Sea port of Savatopolis in the vicinity of modern-day Sukhumi (also named Dioscurias by the Greeks; Ortelius' Pontus Euxinus uses both Savatopolis and the Greek term; Cantelli's map places Savatopoli). Both Ortelius and Cantelli apply the name Sebastopoli to the city of Faso at the mouth of the Rioni river. Modern day Sevastopol did not exist at the time this map was produced - it was not be founded for another century, following Russia's annexation of the Crimean Khanate. In 1784, Catherine the Great ordered the construction of a fortress there, and named it Sevastopol to emphasize the Russian Empire's role as the Third Rome, and successor to the Byzantine Empire.

Cantelli’s maps, notably their cartouches, were some of the most attractively engraved of the later 17th century. The present map is no exception. A superbly executed copperplate engraving, it is the work of engraver Vincenzo Marietti, whose imprint appears in the lower left. The map's multiplicity of place names are distinctly lettered in a variety of neatly-executed fonts, and the pictorial representations of mountains, forests, and wetlands are clear and evocative. The cartouche sets the tone for the content of the map: it is surmounted with a confused swarm of Cossacks, Tartars, and Turks, fighting and dying in battle with no clear victors, heroes, or villains.

This map was drawn by Giacomo Cantelli, engraved in Rome by Vincenzo Mariotti, and printed by Giacomo De Rossi for inclusion in his 1684 atlas. The map is separately listed only in the Bibliothèque Nationale de France, the Biblioteca Nacional de Espana, and the University of Alberta.


Giorgio Widman (fl. 1672 to 1682) was a celebrated map and lettering engraver, who worked primarily with the De Rossi publishing house. He is perhaps best known for having executed the lettering of Giovanni Battista Falda's superb 1675 map of Rome. Learn More...