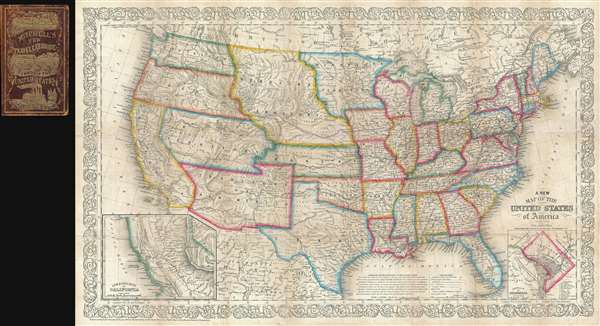 Guide map for transcontinental emigrant travel in the antebellum period.

An unusual example of Charles Desilver's 1856 pocket map of the United States. The map covers the United States from coast to coast during the post-Mexican American War / pre-Civil War Period - a era of incredible national optimism, Indian Wars, the California Gold Rush, and rapid westward expansion. This map is from the first Desilver edition of Mitchell's Traveller's Guide, and is the first map in that series to illustrate the United States from coast to coast. An inset map in the lower left details the California Gold Region - the final destination for many of the travelers who would be using this map.

As an emigrant guide, the focus of the map are the transcontinental routes available to the contemporary traveler. As of 1856, the transcontinental railroads had not yet been completed and the main railroad routes could take a traveler no farther than Omaha City or Independence, Missouri From there, travelers would begin the long and arduous overland voyage along a number of possible trails, including the Santa Fe Route, the Oregon Route, one of two southern routes passing through Oklahoma and Texas, or a northern route following the Missouri River to Washington. The map makes some attempt to illustrate topography, particularly as it pertains to the difficult transit of the Rocky Mountains, but is mostly a trail map focusing on rivers, canals, railroads, and covered wagon routes.

Many of the overland routes extending westward from Missouri follow various routes proposed for a planned transcontinental railroad, as described in a long annotation situated in the Gulf of Mexico. The proposed 'Great Pacific Railroad' had three possible routes along with numerous variations: the northern route, shown here following the Missouri River; a Central Route, generally following the 1853 surveys of the Gunnison-Beckwith expedition, passing through the Rocky Mountains near Great Salt Lake; and a more southerly route passing along the Mexico-US border through lands acquired in the 1853 Gadsden Purchase. The nation's great plans for a trans-continental railroad were sadly 'derailed' by political squabbling and the onset of the American Civil War (1861 - 1865). Nonetheless, construction began on January 8, 1863 and the 'Golden Spike' was driven in on May 10, 1869, at last achieving the great ambition of the prior 20 years.

Politically there is much of interest. The lands to the west of Missouri were generally massive and only partially explored territories. Nebraska extending from the Kansas northern boarder to the modern Canada southern border, embraces much of modern day Nebraska, Idaho, Montana, and Wyoming. Utah Territory includes all of modern day Utah and Nevada. Although by this time the Mormons had made great progress developing Salt Lake City, Fillmore, further south, remained the territorial capital. Both Oregon and Washington extended from the Pacific coast to the Rocky Mountains. Arizona, as yet, had not appeared, with New Mexico extending from California to Texas, with its capital at Santa Fe. Texas, following the Compromise of 1850, appears much as it does today.

Cartographically, the map is derived from an earlier map engraved by J. H. Young and published by Samuel Augusts Mitchell Sr. in 1849. Variants of this map appeared in many editions of Mitchell's Universal Atlas and Mitchell's General Atlas (Published by Thomas Cowperthwait) until 1856, when the Mitchell atlas plates were purchased by Charles Desilver. Desilver hired the engravers J. L. Hazzard and E. Yeager to retool the old Mitchell plates with significant new information, updated physical and political geography, an elaborate acanthus leaf border, and additional explanatory annotations. He also added a distinctive new color scheme marked by bright reds, oranges, and blues, that would later become the hallmark of Samuel Augusts Mitchell Jr.'s maps, published after he reacquired the Mitchell trademark and map plates form Desilver in 1859.

This map accompanied the first Desilver edition of Mitchell's Traveller's Guide. The Mitchell's Traveller's Guide, first published by S. A. Mitchell in 1841, is iconic as the quintessential American trail guide. Versions of the Mitchell guide accompanied the Mormon Pioneers on their historic voyage to Salt Lake, countless 49ers heading west in search of wealth, missionary explorers, and other emigrants. Earlier editions of the guide typically featured a different map focusing on that part of the United States east of Arkansas and Missouri. Desilver expanded the coverage with this new, coast to coast, map, to reflect both the needs of westward migrants and the grand scope of the newly enlarge nation.