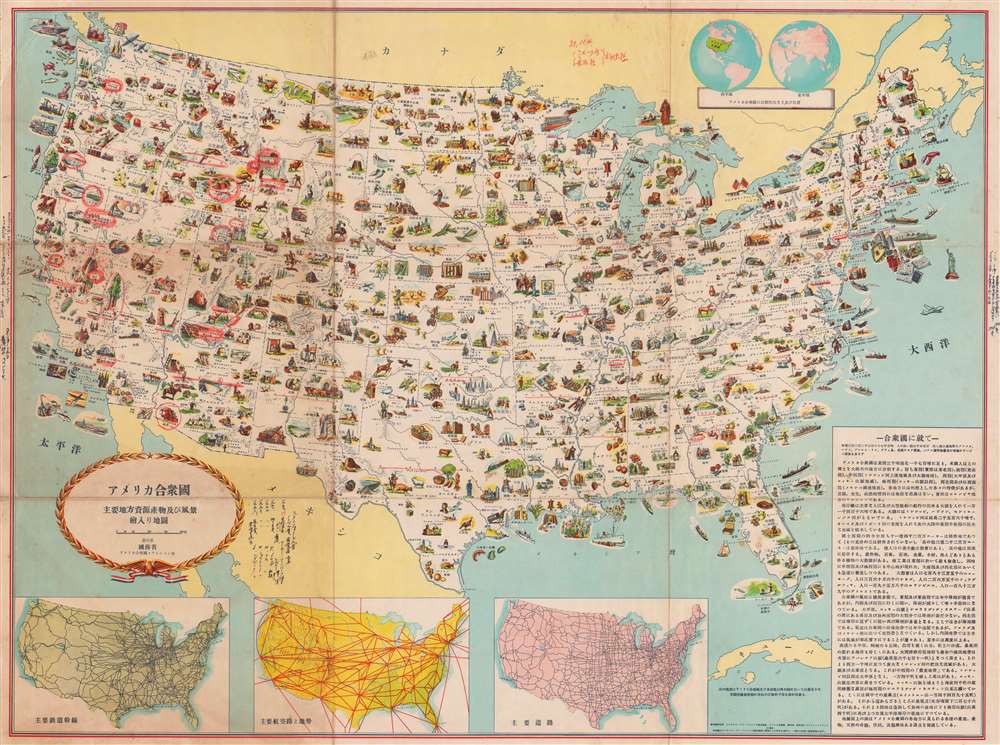 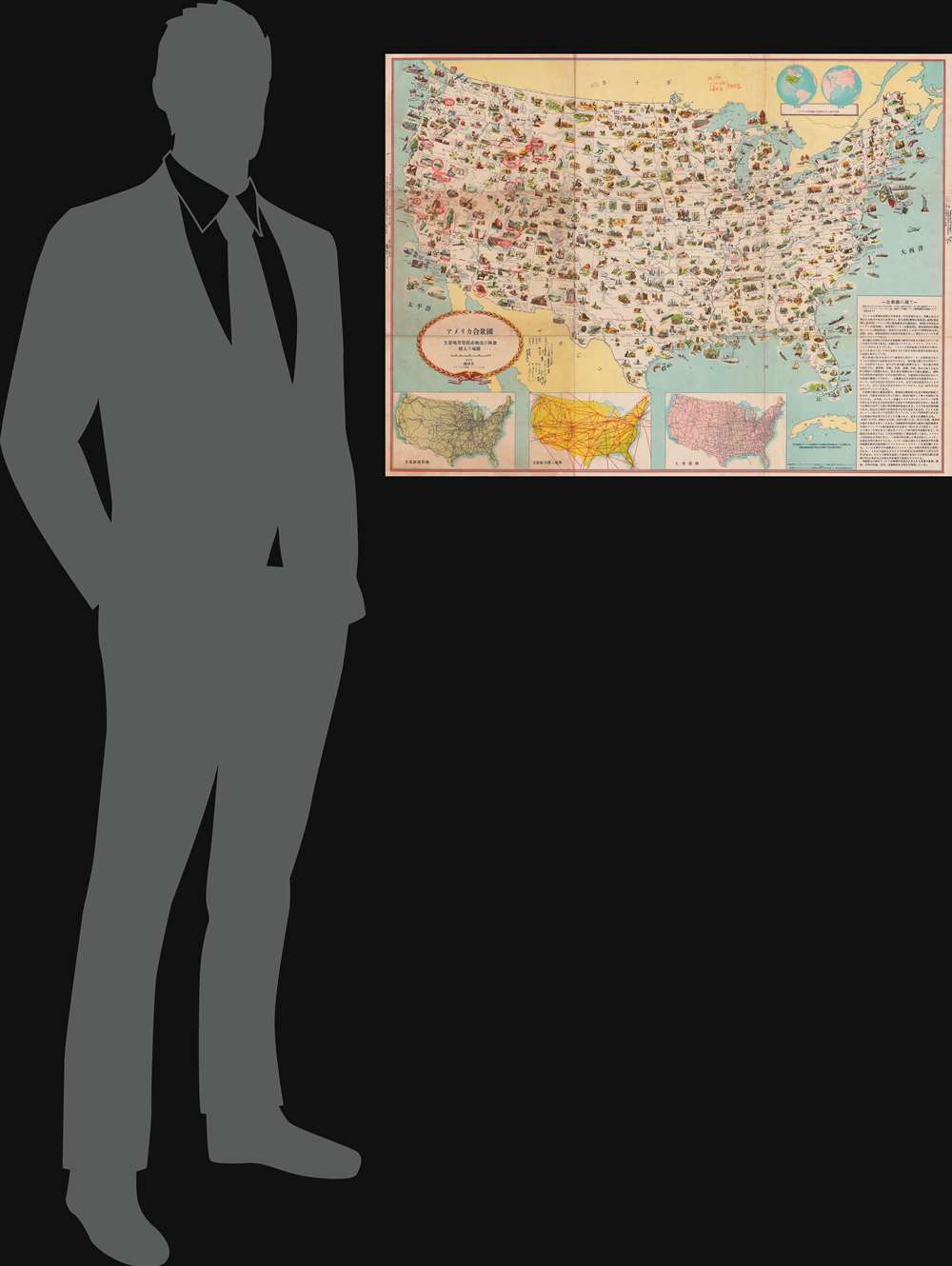 This is a c. 1954 Japanese language pictorial map of the United States published by the U.S. Department of State and distributed by the U.S. Information Agency (U.S.I.A.). It was likely intended both for Japanese travelers to the United States and for consumption within Japan to increase knowledge about the U.S. Although outwardly rather innocuous, it was a product of a wider Cold War information war meant to improve the perception of the U.S. in foreign countries.

The map is intended to illustrate the resources, historic sites, and landmarks of the various states, including birthplaces of famous politicians and cultural figures. There are three inset maps on the lower-left detailing the principal rail, air, and road routes of the U.S. At top-right are insets of the eastern and western hemispheres showing the relative position of the U.S. At bottom-right is a text box detailing geographical, economic, and demographic information.

The previous owner of this map clearly traveled to or was at least interested in the western U.S. as several places there are circled and underlined, along with a few in the eastern U.S. The illustrations of the western U.S. emphasizes the mythology of the 'Old West,' complete with explorers, pioneer wagons, bison, cowboys, and Native Americans. In the left-hand margin, handwriting lists information relating to California, particularly the Lick Observatory near San Jose and the name of the director (台長), suggesting that the owner may have been a scientist or astronomer (they also circled UC-Berkeley and Stanford University). Similar notes relating to Bryn Mawr College (ブリンマー大学) appear in the right-hand margin.

The package containing the map was shipped from the U.S. Information Service (that is, the U.S.I.A.), located in the U.S. Embassy in Tokyo, to Shuwa City University (諏訪市大學) in Nagano Prefecture (perhaps a predecessor to the Tokyo University of Science, Suwa). The accompanying leaflet was made by Voice of America (VOA) and explains that the map was published to commemorate the visit of Crown Prince Akihito to the United States (in September 1953), part of a world tour he undertook soon after becoming Crown Prince to attend the coronation of Queen Elizabeth II in England (photographs of his American visit are shown at left). An accompanying book titled Today's America (今日のアメリカ) was also published in tandem with the map. The back of the leaflet lists stations and times of VOA broadcasts in both English and Japanese in various Japanese cities.

From Enemy to Ally

This map was made in the wake of a rapid change in relations between the U.S. and Japan, from bitter wartime enemies to occupiers and occupied, and then to Cold War allies. Under the U.S. occupation, which ended in early 1952, Japanese citizens could only travel abroad under special circumstances, and the domestic economic situation hardly lent itself to international tourism. But by the mid-1950s, Japan's economy had recovered, and occupation-era travel restrictions were lifted, though travel to the U.S. was still a difficult and expensive proposition. By the late 1950s, increasing numbers of Japanese white-collar workers, tourists, and family members of Japanese Americans were coming to the U.S. Moreover, interest in the U.S. and American culture was extremely high in Japan at this time, so the map was not necessarily only meant for tourists and travelers.

At the same time, by dint of its connection to U.S.I.A., the map's production was caught up in a Cold War information war between the U.S. and the Soviet Union. Although the greatest threat of a Communist movement in Japan had come in the late 1940s (and been crushed by a 'Red Purge'), the U.S. was still deeply concerned given the Communist victory in China and the Korean War. In the mid-1950s, America helped engineer a conservative majority in Japanese politics, premised in part on alliance with the U.S., that endures to the present day. But not everyone was on board for such a course, mainly because of fears that Japan would be caught between the U.S. and the Soviet Union in a potential third world war. Therefore, this map can be seen as a means of improving America's image in Japan in the aftermath of World War II and amid the threat of nuclear conflict.

Although the map is in Japanese, it was printed by the U.S. Department of State (国務省) in Washington, D.C. and distributed abroad by the United States Information Service (the name of U.S.I.A. abroad at this time). The copyright is noted as being held by General Drafting Co., a major map publisher in New York City. We are aware of variants of this map in English, French, German, Spanish, Danish, Japanese, Chinese, Vietnamese, and Farsi. It is undated, but as Alaska and Hawaii are referred to as territories of the U.S. rather than states, it must have been produced before they attained statehood in 1959, while the reference to Akihito's American visit means that it was published after September 1953. It is only known to be held by Stanford University and presumably is also in the records of U.S.A.I. held in the National Archives, while being very scarce to the market.

U.S. Department of State (1789 - present) is the main foreign affairs body of the executive branch of the United States government. It has produced thousands of maps since the start of the 20th century dealing with U.S. geography, the geography of foreign countries, and the location of embassies and consulates. Learn More...


U.S. Information Agency (U.S.I.A.; 1953 – 1999), in its early years also known as United States Information Service (USIS) within the various embassies of the U.S. abroad, was a product of the Cold War dedicated to 'public diplomacy,' often but not exclusively anti-Communist propaganda in foreign languages targeted at the local population. It was preceded by the Office of the Coordinator of Information, created in 1941, which housed Voice of America (VOA) founded the following year. USAI was part of a massive information war effort to counter Communist and anti-American propaganda, especially in the Third World. The agency also produced information for the domestic audience, trumpeting the good work being done by U.S. entities and interests abroad. It also conducted public opinion polls throughout the world and produced twice-daily reports on foreign media for delivery to the President. Often collaborating with the State Department and Voice of America, USIA was instructed not to be overly transparent but to use subtle methods and messages to develop a positive image of the U.S. abroad. The agency was dissolved and placed within the State Department in 1999 as the office of Public Diplomacy and Public Affairs. Learn More...


General Drafting Corporation (1909 - 1992) was one of the 'Big Three' publishers of road maps between 1930 and 1970, along with H. M. Gousha and Rand McNally. Founded in 1909, Otto G. Lindberg, an immigrant from Finland and the company's founder, began his business with a borrowed drafting board and a $500 loan from his father. At the time only twenty-three years old, Lindberg advertised his business as 'any and all general drafting' and was based out of 170 Broadway in New York City. Only two years later, in 1911, the firm secured its first contract from the American Automobile Association to make 'road maps'. Lindberg incorporated his business in 1914 and became its first Chairman of the Board, a position he held until his death in 1968. Lindberg persuaded Standard Oil of New Jersey to let him draw the 'best' road map of the state that they had ever seen, and Standard Oil would distribute it for free. Sufficiently impressed with the finished product, Standard contracted General Drafting to make all their road maps - a relationship that lasted another six decades. This relationship allowed General Drafting to work exclusively for Standard Oil, but when oil companies stopped providing free maps, General Drafting was in a bind. The company tried to expand into the retail map market, and it of course continued creating maps for Exxon (the new name for Standard Oil) to sell, but its returns continued to decline. The firm was purchased in 1992 by Langenscheidt and subsequently absorbed into the American Map Company. General Drafting's state maps became this company's 'Travelvision' lineup. Learn More...

Good. Some wear and loss along fold lines and at edges. Formerly bent at top-left.