1902 National Publishing Map of the United States and its Territories 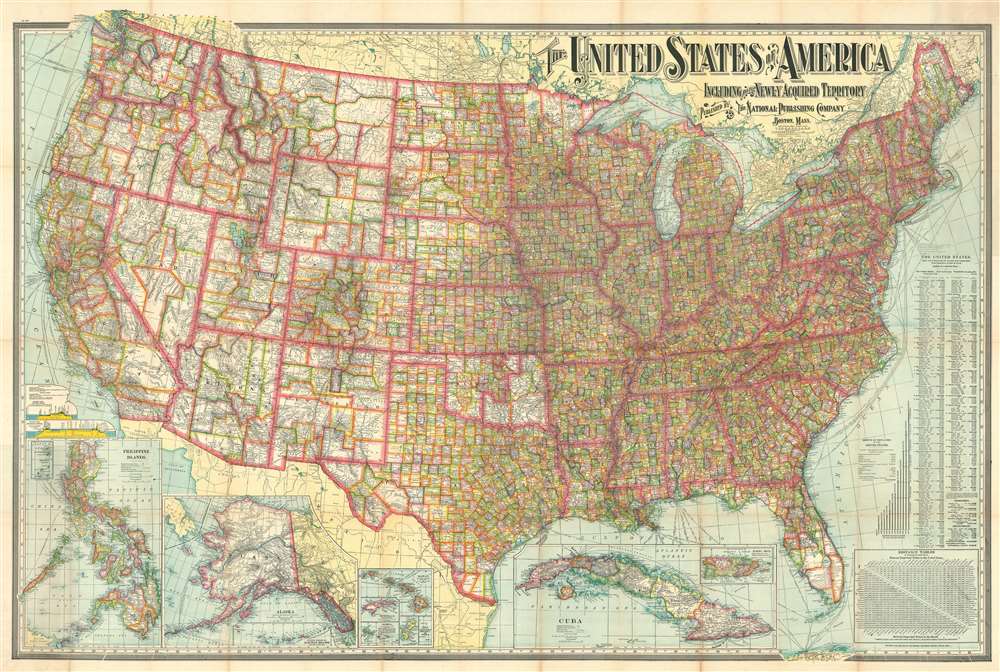 1902 National Publishing Map of the United States and its Territories

The United States at the turn of the 20th century.

This is a 1902 National Publishing Company map of the United States with a typographically elaborate title. The map depicts the continental United States from the Pacific Ocean to the Atlantic Ocean and the Bahamas and from Canada to Mexico and the Gulf of Mexico. Each of the states and territories are divided into counties, with myriad cities, towns, and villages labeled. The distinction between the developing western states, with enormous scarcely populated counties and the eastern states is made stark by the map's rich coloring. The road network spreads across the country like a web, with major cities functioning as hubs. Shipping lanes are noted in the Atlantic and Pacific, with their destination and the company which operates on that route provided. Several inset maps are situated along the lower border, including Puerto Rico, Cuba, Hawaii, Wake Island, Guam, Samoa, Tutuila Island, Howland Island and Baker Island, Alaska (with a smaller inset of the western portion of the Aleutian Islands), and the Philippines.

This map was published by The National Publishing Company of Boston, Massachusetts, in 1902. It was first issued in 1901, the present example being the second edition. In the year this map was issued, the National Publishing Company merged with its sister company, the Scarborough Company. The Scarborough Company subsequently split this large map into separately published eastern and western sheets.