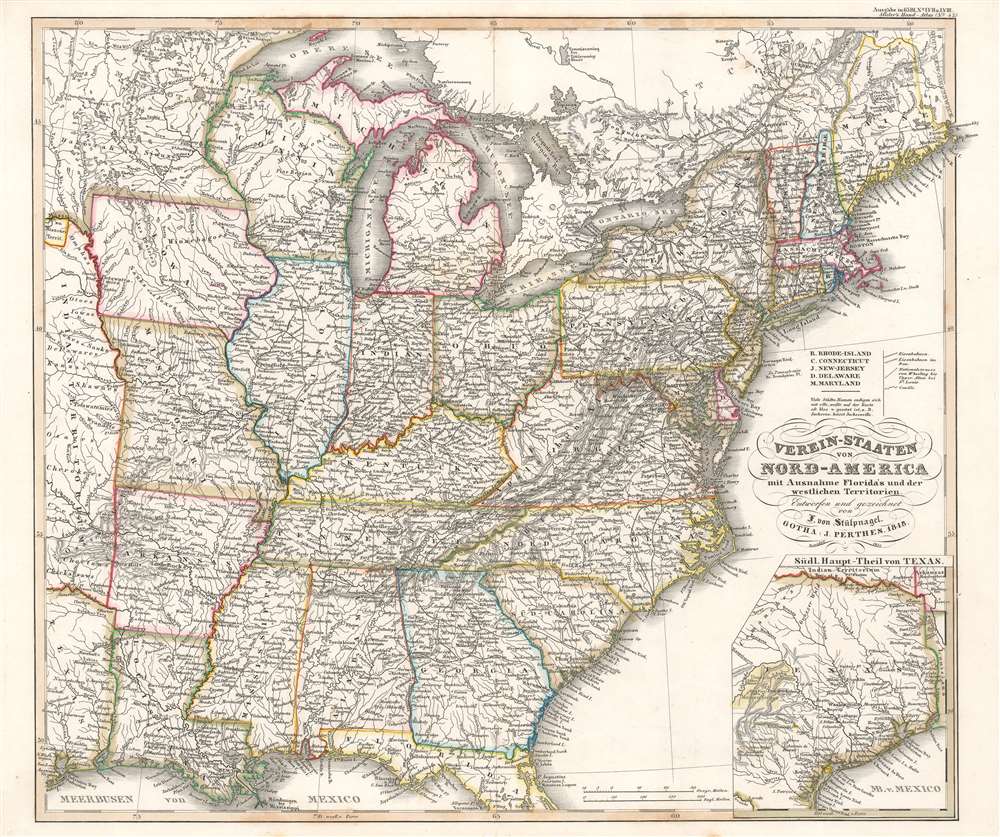 A German colony in Texas.

This is a beautifully engraved 1851 Johann Friedrich von Stülpnagel map of the eastern United States. The map depicts from Galveston Bay to the Atlantic Ocean and from Lake Superior to the Gulf of Mexico. Roads, canals, and railroads highlight the nation's transportation network. An inset in the lower right corner details and Texas as it appeared during the Mexican-American War. Cities, towns, and rivers appear here as well.

Stülpnagel marks the gold region in North Carolina, the site of the first gold rush in the United States. Gold was first discovered in North Carolina in 1799 by twelve-year-old Conrad Reed. Gold played a major role in the settlement of western North Carolina.

The Mainzer Adelsverein - A German Colony in Texas

The German colony known as the Mainzer Adelsverein is highlighted in Texas. Officially called the Mainzer Adelsverein at Biebrich am Rhein, the Society was founded on April 20, 1842, and attempted to establish a German colony within the Republic of Texas. The land where the immigrants intended to live was to be purchased by the Adelsverein or be granted to them by the Republic of Texas. The first colonists associated with the Adelsverein arrived in Galveston in July 1844. In December 1844, the immigrants moved to Indianola and then further inland to grants near Comal Springs. The first colony was named New Braunfels by Prince Carl of Solms-Braunfels (the first commissioner general of the Adelsverein) after his homeland. The second commissioner-general, John O. Meusebach, founded Fredericksburg in 1845, the first settlement outside the land grant. The Adelsverein ended its campaign to colonize Texas in 1853 due to a large amount of debt.

This map was created by Johann Friedrich von Stülpnagel and published by Justus Perthes in the 1851 edition of Stieler's Handatlas. No examples of the 1851 revision are cataloged in OCLC, but ten examples of the 1848 edition appear in the database.

Johann Friedrich von Stülpnagel (March 13, 1786 - October 18, 1865) was a Prussian cartographer and military officer. He joined the Old Prussian Infantry Regiment No. 7 under the command of Carl Philipp von Owstin in August 1804, became and ensign in December 1806 and a second lieutenant in June 1807. He married Sophie Charlotte Keßler (1791 - 1866) in 1810, with whom he had ten children, eight of which survived him. During Napoleon's 1812 Russian campaign, von Stülpnagel was captured by the Russians at the end of November 1812. He participated in nearly every campaign between 1806 and 1815 and fought in Germany, Russian, the Netherlands, and France. He was forced to retire from the army in 1822 after an ear ailment caused him to become almost totally deaf. At this point, not being a wealthy individual, he moved to Wandersleben and started working as a draftsman for Justus Perthes, the geographic publisher, in 1823. At Justus Perthes he worked with Adolf Stieler on his 'Handatlas'. Von Stülpnagel soon ranked among one of the 'pillars of the business' and drafted numerous supplementary sheets and corrections for the Handatlas. Stülpnagel officially retired from the army on September 10, 1835 as a captain. Stülpnagel moved to Gotha after Stieler's death in 1836 and continued to work on Stieler's Handatlas with Heinrich Berghaus and Joseph Christoph Bär. He worked less and less beginning in 1863 because of age-related complaints. Von Stülpnagel died at seventy-nine years old and left behind his wife and eight children. Learn More...