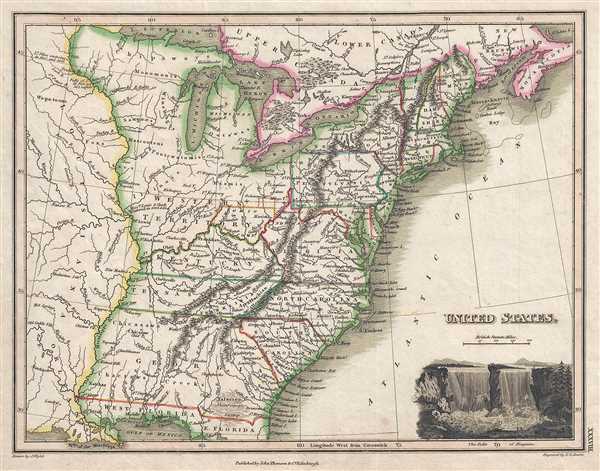 Unique map of the United States that includes the 'forgotten' state of Franklinia.

This 1819 map of the United States depicts the Atlantic coast from Nova Scotia and New Brunswick to northern Florida. This is one of the latest and few maps to identify the ephemeral pseudo-state of Franklinia. There is a vignette view of the Niagara Falls in the lower right. State and Territorial political boundaries are highlighted in color outline. Topography shown in profile.

The creation of this map predates the Louisiana Purchase, referring to the land west of the Mississippi as Louisiana Orleans. This map also predates the state of Ohio in 1803, showing drastically different borders for Ohio than exist today, presumably conglomerating the borders of two different military districts and purchases that existed at the time. The map also features the names of Native American tribes, which were constantly fighting with settlers and the federal government over land ownership rights.

The most intriguing aspect of this map, however, is the inclusion of the state of Franklinia. Franklinia, also known as the State of Franklin, existed from 1784 to 1788, although it was never formally recognized. Franklinia emerged from western North Carolina, after the land was ceded to the federal government to help pay war debts. The settlers living there believed that they were being ignored by both the government of North Carolina and the federal government, so they decided to create their own state, even going so far as to apply for statehood. After four years of turmoil, indecision, a complete lack of success, and increasing debt, the area was reabsorbed by North Carolina before it was ceded to become a part of Tennessee, which became a state in 1796.

This map was published in the first edition of James Wyld and John Thomson's 1819 General Atlas. It was drawn by Wyld and engraved by Nathaniel Rogers Hewitt.


John Thomson (1777 - c. 1841) was a Scottish cartographer, publisher, and bookbinder active in Edinburgh during the early part of the 19th century. Thomson apprenticed under Edinburgh bookbinder Robert Alison. After his apprenticeship he briefly went into business with Abraham Thomson. Later the two parted ways, John Thomson segueing into maps and Abraham Thomson taking over the bookbinding portion of the business. Thomson is generally one of the leading publishers in the Edinburgh school of cartography which flourished from roughly 1800 to 1830. Thomson and his contemporaries (Pinkerton and Cary) redefined European cartography by abandoning typical 18th century decorative elements such as elaborate title cartouches and fantastic beasts in favor of detail and accuracy. Thomson's principle works include Thomson's New General Atlas, published from 1814 to 1821, the New Classical and Historical Atlas of 1829, and his 1830 Atlas of Scotland. The Atlas of Scotland, a work of groundbreaking detail and dedication would eventually bankrupt the Thomson firm in 1830, at which time their plates were sequestered by the court. The firm partially recovered in the subsequent year allowing Thomson to reclaim his printing plates in 1831, but filed again for bankruptcy in 1835, at which time most of his printing plates were sold to A. K. Johnston and Company. There is some suggestion that he continued to work as a bookbinder until 1841. Today, Thomson maps are becoming increasingly rare as they are highly admired for their impressive size, vivid hand coloration, and superb detail. Learn More...

Wyld, J., A General Atlas, Containing Maps illustrating some important periods in Ancient History; and distinct Maps of the several Empires, Kingdoms and States In The World, (Edinburgh: John Thomson) 1819.