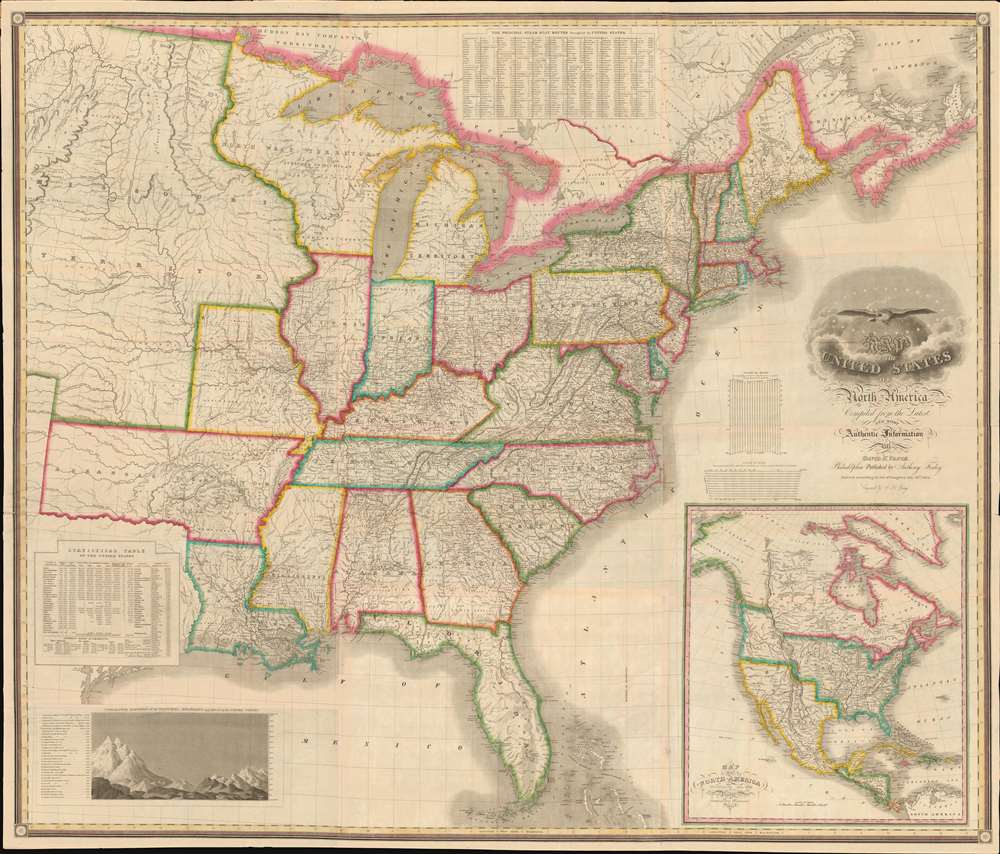 This is the first edition of David Vance and Anthony Finley's outstanding wall map of the United States, published in 1825, here in a remarkable fresh state. This map is significant with regard to its early date, contemporaneous with Amos Lay's map, but more ambitions and predating the 1829 Tanner map by 4 years, as well as its detailed coverage of historic developments. Converge encompasses the Untitled States as it appeared at the time, extending from roughly the Texas Border (100° West of Greenwich / 27° West of Washington) to the Pacific and from the Saint Lawrence River to the Florida Keys. A large inset map appears in the lower right quadrant, illustrating the whole of North America. This is the first map to illustrate American claims to British Columbia that would later spark the 54°40' Debate.

Capturing an Ephemeral Moment in Time

The map illustrates a number of historic events, including the construction of the Erie Canal (here identified as the 'Grand Canal', completed in the same year this map was issued), the dynamic development of the recently acquired American territories west of the Mississippi, the military bounty lands in Missouri associated with the war of 1812, and numerous fur trading outposts, Missionary stations, and American Indian villages. Part of the map illustrates the forced relocation of indigenous peoples, for example, the Cherokee and Choctaw nations are depicted both in their native territories, to the East of the Mississippi, and in the West, where they were assigned new lands by the federal government.

The Inset: 54-40 or Fight! American Claims to British Columbia

According to map collector and historian David Rumsey the inset map of North America in the lower right, is the first map to illustrate American claims to British Columbia. Following the transcontinental crossing of North America by the British Northwest Company sponsored explorer Alexander MacKenzie (1792 – 1793), and the American expedition of Louis and Clark up the Missouri to the mouth of the Columbia River (1804 – 1806), it became apparent that control of the fur and resource rich Pacific Northwest would bring great wealth and power to whoever could assert sovereignty. The American tycoon John Jacob Astor, with the permission of President Thomas Jefferson, was the first to attempt a permeant trading colony in the region, founding Astoria on the Columbia river in 1811. This quickly let to a confrontation with the established British-Canadian Northwest Company over this valuable territory. Americans in the 1820s through the 1840s argued that most of the Pacific Northwest should be part of the United States as a legacy of the 1803 Louisiana Purchase. England, on the other hand, argued for residual claims to the region derived from the MacKenzie expedition and its fur trading empires. The Oregon Dispute, as it came to be known, became an important in geopolitical issue between the British Empire and the United States, especially after the War of 1812. Americans adopted the slogan '54-40 or Fight!' until the Oregon Question was finally resolved roughly along the current border-line by the 1846 Oregon Treaty.

An advertisement for this map appears in the 1824 edition of Finley's General Atlas. The advertisement is concise and sticks to the facts, describing this production as a 'New and Elegant Map' engraved on 'six sheets of imperial drawing-paper', which when united will cover 'every state in the Union, the whole of the North Western and Michigan Territories, a portion of Missouri and Aransas Territories, and the whole of Florida.' The advertisement concludes that 'it is unnecessary to say anything in commendation of the plan of the Map, as here proposed, or of the style in which it will be executed; for, with regard to the plan, the advantages of it must be at once apparent...'

This map was compiled by David H. Vance and published in Philadelphia by Anthony Finley. The engraving is the work of J. H. Young. The present examples I the first edition, but subsequent editions were published in 1827, 1828, 1829, 1831 and 1833.

The item is scarce to the market. We are aware of examples at the Library of Congress, the New York Public Library, and in the collection of David Rumsey. Auction history indicates the map in this edition being offered at Christies in 2013 with an estimate of 20 - 30,000 USD. Another example appeared at Sotheby's in 2007.

We will also add that the present example is outstandingly fresh and beautiful. Most examples are dissected and mounted on linen, whereas this example is joined but uncut, exhibiting and exceptional state of preservation for the famously fragile 19th century onion skin map paper. If you are considering an example of this map for your collection, this is the one you want.


David H. Vance (1799 - c. May 29, 1832) was an American mapmaker, surveyor, and engraver based in New York and Philadelphia. Vance is an important if elusive figure. He appears in a ship passenger manifest form 1824 returning from England, where he is identified as a Land Agent and Surveyor. He drafted many of the maps for Anthony Finley's New American Atlas, and engraved several maps for Harty's Modern Atlas. In 1825 - 26 Vance compiled an important large-scale wall map of the United States and a map of the world, both also in partnership with Anthony Finley. In 1825, along with J. Ogden Dey, he completed a seminal map of western New York state. Learn More...