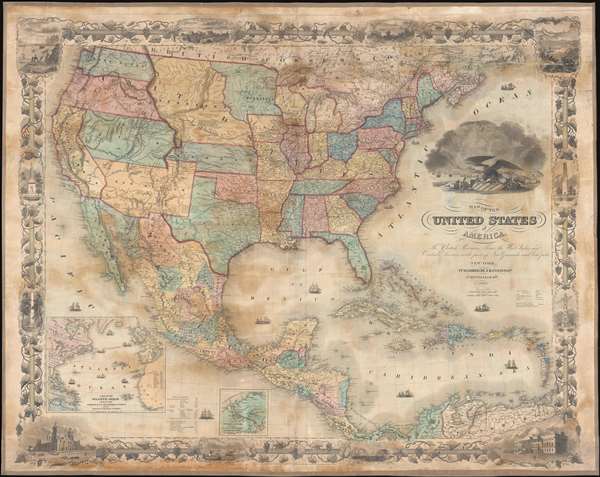 An exceptionally beautiful map of considerable historic importance, this is J. H. Colton's 1855 map of the United States. The map's coverage extends from Canada to Colombia, inclusive of all of the United States, Mexico, Central America, and the West Indies. It is surrounded by an elaborate grape vine themed decorative border engraved by Bernard. The map itself was engraved by Atwood, and is full of fascinating detail relating to the westward migration and early territorial development of the Transmississippi.

Early Territorial Configuration of the Transmississippi

The map is most interesting for its ephemeral delineation of the lands to the west of the Mississippi Valley, where vast new territories acquired at the end of the Mexican American War were rapidly being consolidated into the United States. The publication of this map immediately follows the 1854 Kansas-Nebraska Act, which defined the Kansas Territory and created a new Nebraska Territory extending to border with British America (Canada). Although California, enriched by the 1849 Gold Rush, was already a state, the lands between California and the Rocky Mountains are presented along territorial boundaries. Neither Nevada nor Arizona were yet conceived of. Utah extends from California to Kansas and has its capitol at Fillmore City, although this would soon change to Mormon capital at Salt Lake City. Similarly, Washington and Oregon incorporate vast swaths of land extending form the Pacific to Nebraska.

Colton has also notes several routes related to the American Westward Migration. These include the Oregon Trail, with distance notations from Westport Landing, Missouri. The Santa Fe Route, also running from Westport Landing, appears further south. In addition to migrant routes, the map also details military routes, including those taken by General Kearney in 1846, John C. Fremont, and General Wool, among others. Throughout land granted to indigenous American Indian Nations are meticulously noted.

An inset has been added to the lower left quadrant detailing the Atlantic Ocean and several trans-Atlantic shipping routes. These include the New York - Boston - Halifax - Liverpool route. Various other routes run from the Havana to Madeira and spider-web throughout the West Indies. No fewer than 15 decorative ships, including both tall ships and steam vessels, decorate the seas. The dramatic cartouche image includes a large Bald Eagle sitting astride a stars and stripes armorial shield and various trade goods. A bustling port scene appears in the background.

The map is highly decorative and evocative of John M. Atwood's personal style. Although Atwood himself engraved only the map proper, with the border design and pictorial engraving being the work of W. S. Barnard, the whole is so indicative of Atwood's style we can only image that he supervised the full engraving process. The map is surrounded by an elaborate grape vine border with numerous pictorial vignettes. The four primary vignettes illustrate, clockwise from top left: salmon fishing at Willamette Falls, Oregon; the valley of the Connecticut River as seen from Mount Holyoke; the Capitol Building, as yet incomplete, in Washington D.C.; and the cathedral of Mexico City. Lesser vignettes at the top and bottom of the map illustrate John Jacob Astor's fur trading outpost in Astoria, Oregon; Lake Saratoga in New York; Mexican's catching wild cattle; and ships entering a port. To the right and left of the map are illustrations of the Pulaski Monument in Savanna, Georgia; the Battle Monument of Baltimore, Maryland; the Bunker Hill Monument in Boston, Massachusetts; and the Washington Monument in New York City, New York (no longer extant?).

Colton first issued this map in 1849. Another edition followed later in 1849 in anticipation of the Compromise of 1850 and including updates relating to the explorations of Fremont and the discovery of Gold at Sutter's Mill. Subsequent editions were prepared annually until about 1859.

The present examples is the 6th edition. The present edition is laid down on linen in wall map format and is accompanied by its original rollers.


John M. Atwood (1818 - c. 1880) was an American engraver based in Philadelphia and New York City during the middle part of the 19th century. Atwood was born in Washington D.C. Little is known of Atwood's life but most of his work was completed in conjunction with the publishing firms of Horace Thayer and J. H. Colton. A review of Atwood's work suggests that he was a highly accomplished, stylistically distinct, and detail oriented engraver. Colton seems to have turned to Atwood to engrave some of his most important as well as decorative maps. His most influential map is most likely the 1856 De. Cordova pocket map of Texas, however, he also engraved the Colton's well known and highly decorative Thirty Three Miles Around New York and Colton's important 1849 Map of the United States. Learn More...