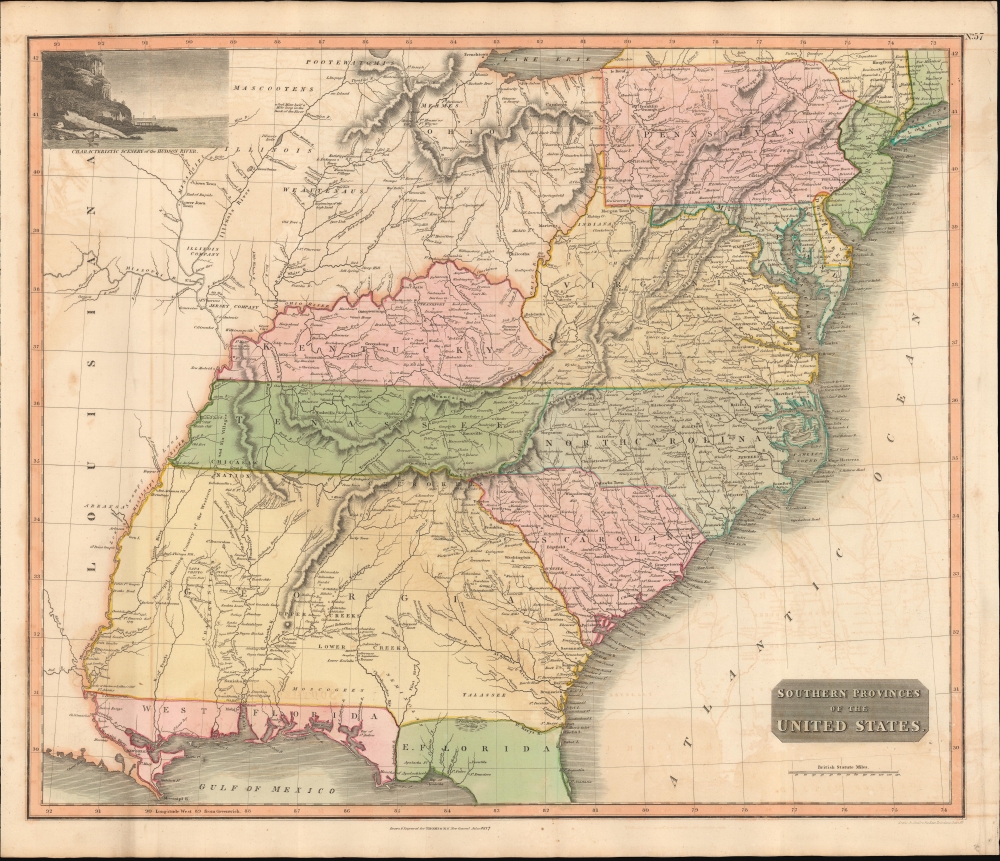 A scarce first edition of John Thomson's 1817 map of the southeastern part of the United States. Thomson prepared this map during a transitional period of expansion shortly following the American Revolutionary War and is among most thorough treatments of this region prior to the U.S. Government Surveys. It records early U.S. efforts to acquire and assimilate American Indian territories west of the Appalachian Mountains.

The map covers from the Mississippi River eastward to the Atlantic, extending north as far as Lake Erie, and south to northern Florida and the Mississippi River Delta. The states of Pennsylvania, New Jersey, Maryland, Delaware, Virginia, Kentucky, Tennessee, North Carolina, South Carolina, and Georgia are illustrated in full while Ohio, Illinois, Florida, Alabama, and Mississippi have yet to appear as either states or territories. Florida was not yet part of the United States but would join 3 years after this map was printed in 1819. An inset in the upper left corner declares itself typical of the Hudson River and bears a close resemblance to the Palisades just outside New York City.

This map is particularly interesting for its detailed treatment of American Indian activity between the Mississippi and the Appalachian Mountains. American Indian nations are noted throughout, including the Creek, Seminole, Apache, Choctaw, and Chickasaw, among others. Hunting grounds, villages and fortifications are also identified, sometimes accompanied by the date on which they were destroyed. Thomson additionally identifies the Wabash Company, the Jersey Company and the Illinois Company - joint stock ventures formed during the colonial period to acquire, sell, and colonize American Indian lands. Along these commercial lines, some coal mines are also noted on the Illinois River.

Thomson, J., A New General Atlas, (Edinburgh: Baldwin, Craddock, Joy) 1817.     Thomson's New General Atlas was first published in 1817 and continued to be published until about 1821. This is the first of Thomson's major cartographic works and the atlas for which is most celebrated. The New General Atlas follows in the Edinburgh School, which eschews excessive decoration in favor of a more minimalistic fact-based cartographic vision, as established by John Pinkerton, Laurie and Whittle, John Cary, and others in the previous decades. The maps are notable for their massive scale, heavy stock, elegant color work, and easy-to-read typefaces. Although the atlas stopped being published after 1821, Thomson continued to offer 'supplementary' maps that could be tipped into the atlas as late as 1830, when he declared bankruptcy. The maps in the Thomson Atlas were engraved by Thomas Clerk, William Dassauville, Nathaniel Rogers Hewitt, James Kirkwood, Robert Kirkwood, John Menzies, George Menzies, Edward Mitchell, John Moffatt, Samuel John Neele, Robert Scott, and James Wyld.