1846 Ensign Map of the United States (Texas at fullest) 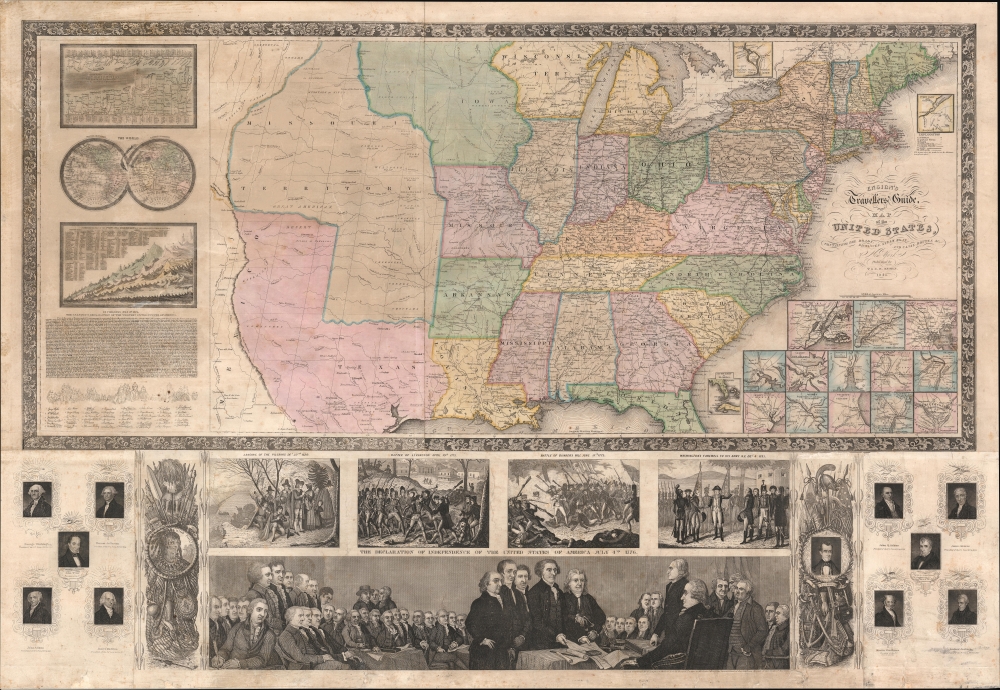 1846 Ensign Map of the United States (Texas at fullest)

An extremely scarce Mexican-American War variant edition of Ensign and Thayer's series of highly decorative United States wall maps. This map, dated 1846, is the first edition to show Texas after joining the United States - with its fullest borders extending north as far as modern-day Wyoming and including New Mexico. It illustrates the Republic of Texas according to its early proclaimed borders, names Austin's colony, and identifies Austin as the capital. In addition, the map features a large Missouri Territory. Small mountains and rivers charts on the Bulla / Darton model appear in the upper left quadrant. The bottom of the map features a large panorama of the Signing of the Declaration of Independence as well as various scenes from American History. To either side are illustrations of Metacom, the Pokunoket Sachem called 'King Philip' and James Polk, who had just been elected 11th president of the United Sates. Portraits of other former presidents fan out on either side of the panorama.

The Mexican-American War was fought between Mexico and the United States over Texas from 1846 to 1848. The Republic of Texas was a short-lived nation established in March of 1836 when it ceded from Mexico. Following the independence of Mexico from Spain, the American Stephen Fuller Austin led a group of 300 Empresarios to settle Texas, near Austin, where they received a grant from the Mexican government. As more Americans moved to Texas, resentment and strife began to build between the American settlers and Mexican authorities. This and other factors ultimately led to the Texan Revolution in 1835 and the declaration of Texan independence in 1836. Texas remained an independent republic until it joined the United States 10 years later in 1846. The annexation incited Mexican authorities, who considered Texas their sovereign territory. Mexico marched against Texas and, in the aftermath, the U.S. landed forces at Veracruz and marched on Mexico City. The army, after a series of one-sided battles, captured Mexico City, forcing the Mexican government to sue for peace. In the subsequent Treaty of Guadeloupe Hidalgo, United States gained most of the southwestern United States, including Texas, Arizona, New Mexico, California, Utah, and Nevada. In exchange, the U.S. paid Mexico $15 million and assumed $3.5 million in debt the U.S. claimed the Mexican government owed to American citizens.

The borders of the Republic of Texas were in dispute from the earliest days of the Texan Revolution. The Republic-claimed borders followed the Treaties of Velasco between the newly created Texas Republic and Mexican leader, Antonio López de Santa Anna. These treaties adhered the 1819 Adams-Onís Treaty between the United States and Spain, which established the Sabine River as the eastern boundary of Spanish Texas and western boundary of the Missouri Territory. The Republic's southern and western boundary with Mexico was more nuanced. Texas claimed the Rio Grande del Norte as its western and southernmost border, while Mexico argued for a boundary much further east at the Nueces River. When Texas was annexed into the United States, the expansionist Polk regime followed the Republic claimed boundary, thus absorbing Mexican claimed territory as far west as Santa Fe. This escalated already existing tensions between the United States, the former Republic of Texas, and Mexico, ultimately triggering for the Mexican-American War (1846 - 1848).

Phelps and Ensign first issued a map of this title in 1839 and terminated it at the Mississippi. The present example, presaging the Mexican American War and Texas Annexation, is dramatically expanded to include the Rocky Mountains and additional illustrations. Various editions were issued in 1840, 1841, and, as above 1845, when Thayer's imprint replaced that of Phelps. Additional publications with major revisions continued until about 1859. The entire series, one of the most decorative in the history of early American map publishing, follows the course of the Westward Expansion and the Mexican American War, and as such is of the utmost interest to collectors and historians. While maps from this series do come to market from time to time, the individual states, especially Republic of Texas and Mexican-American War editions, are exceedingly uncommon and poorly represented even in institutional collections.


Joseph Wells (April 8, 1808 - October 5, 1874) was an English-American engraver active in Brooklyn, New York, in the late 19th century. Wells was born in Birmingham,e England where mastered line engraving. He emigrated to the United States, settling in Brooklyn, New York, on Aug 28, 1837. Well's pioneered the transient from copper to steel plate engraving in the mid-19th century. He was active as an engraver until about 1870. Learn More...

Very good. A few surface mends with virtually no loss. Mounted on linen and fully stabilized.