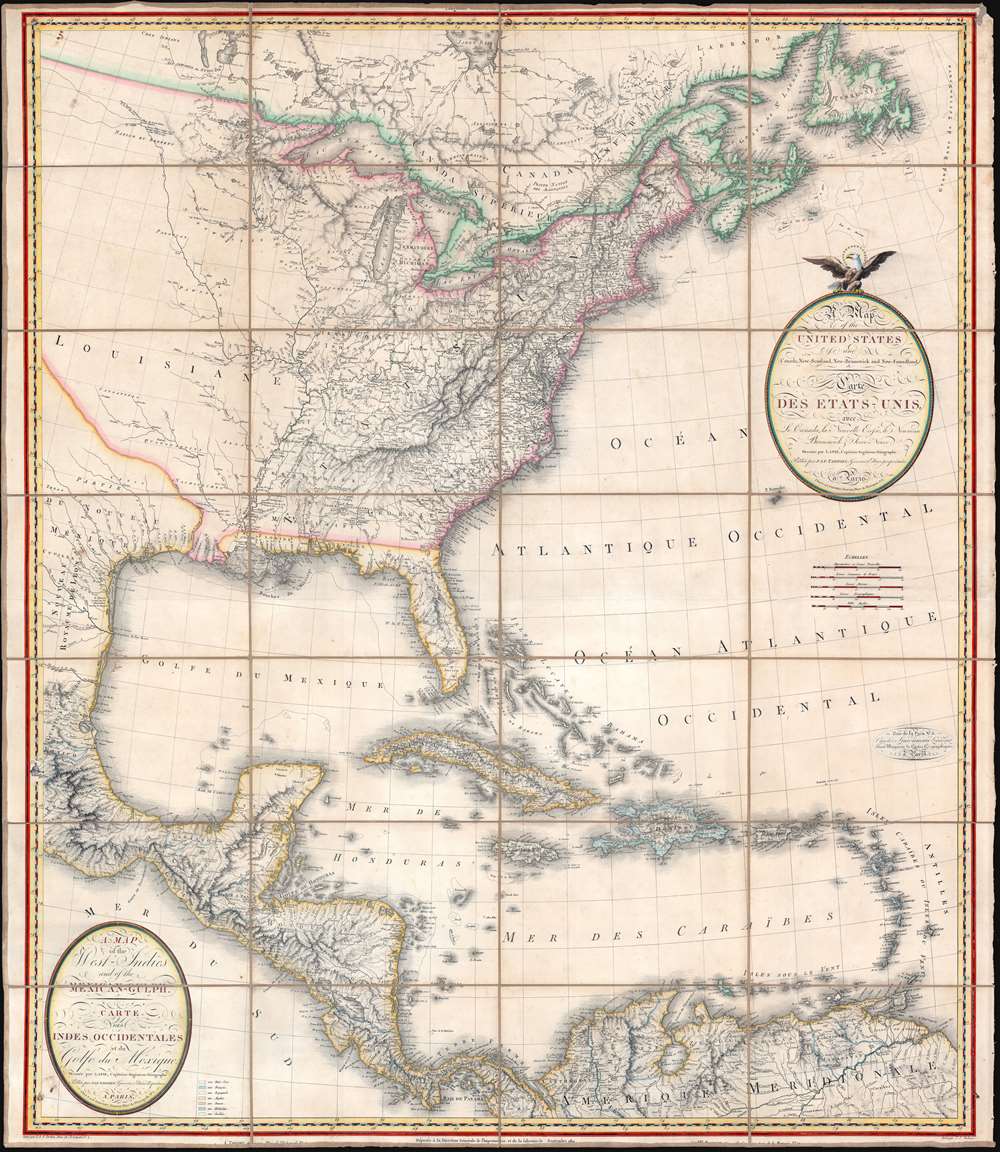 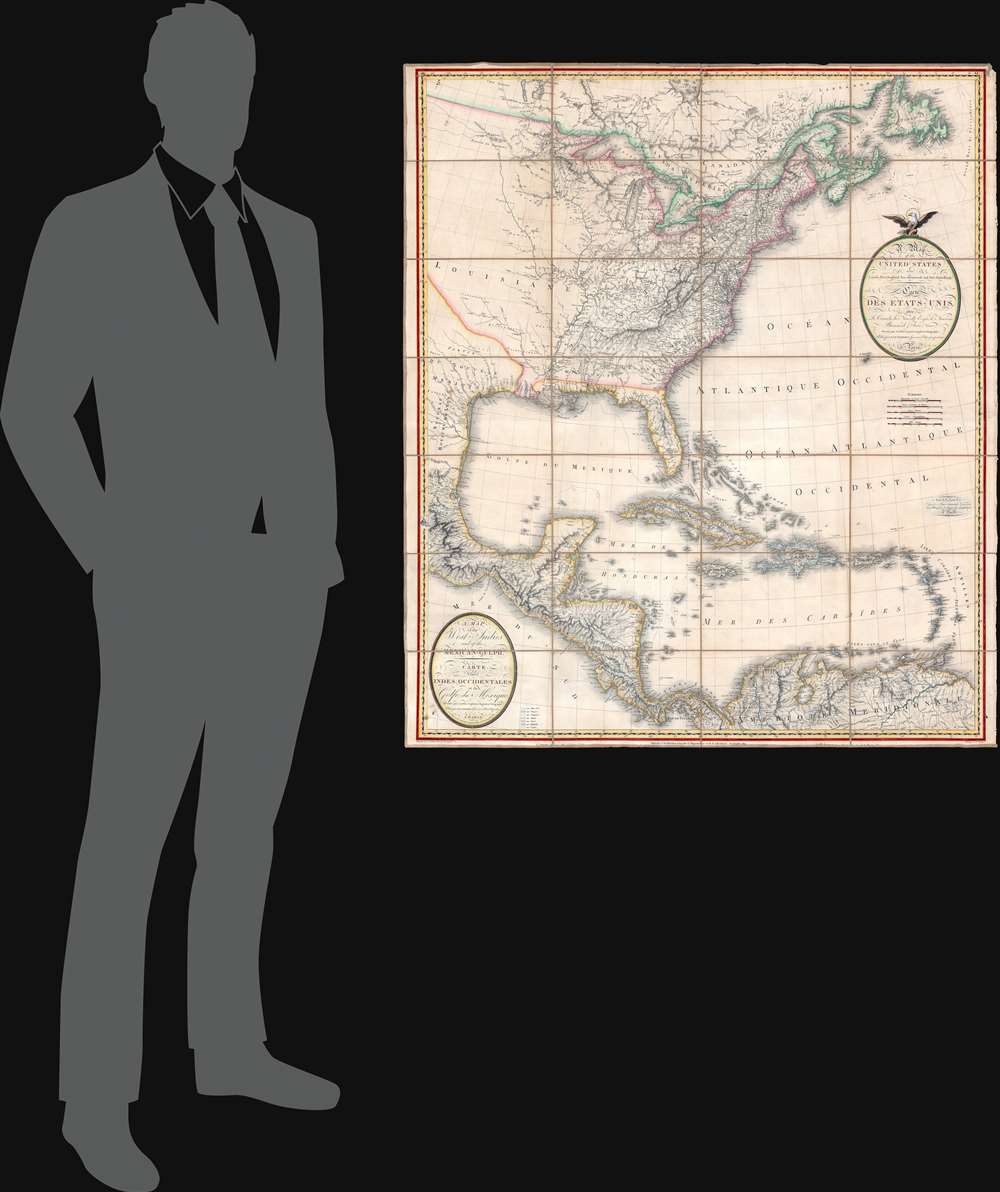 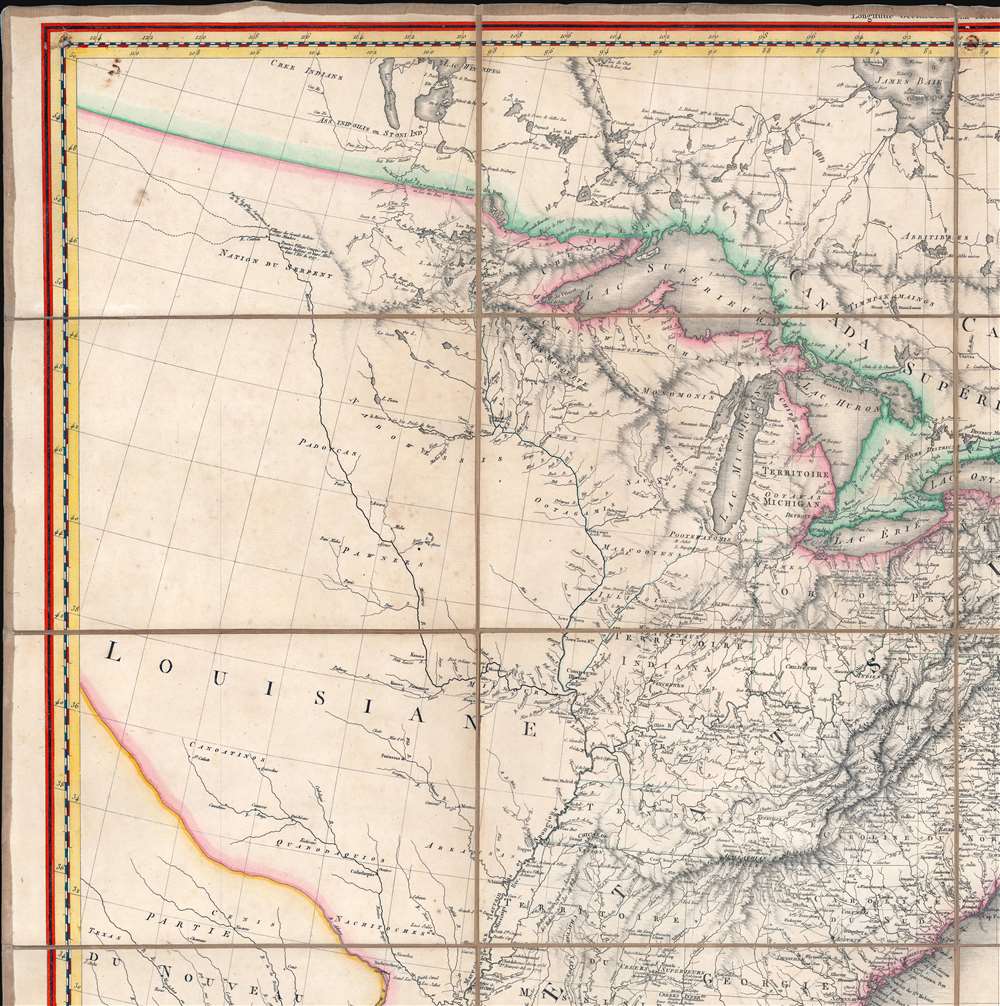 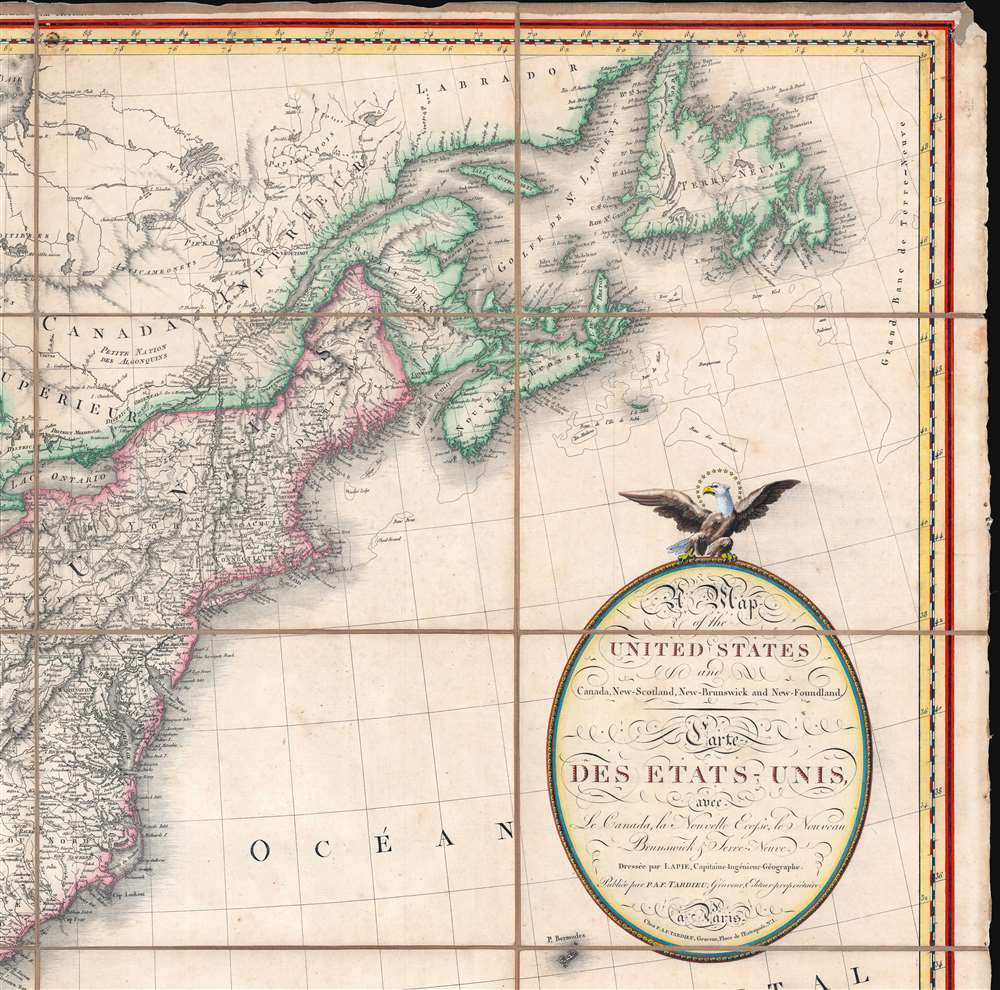 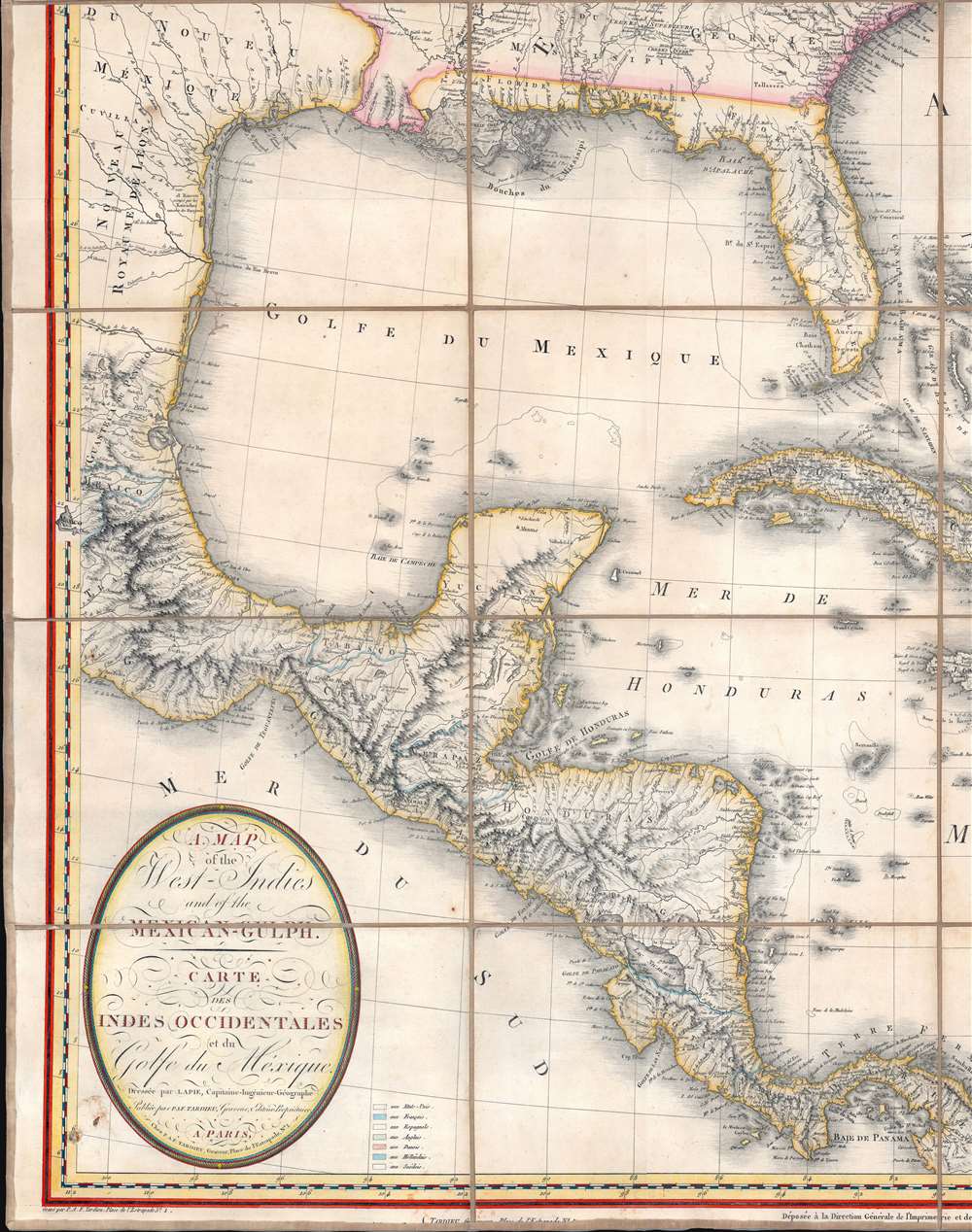 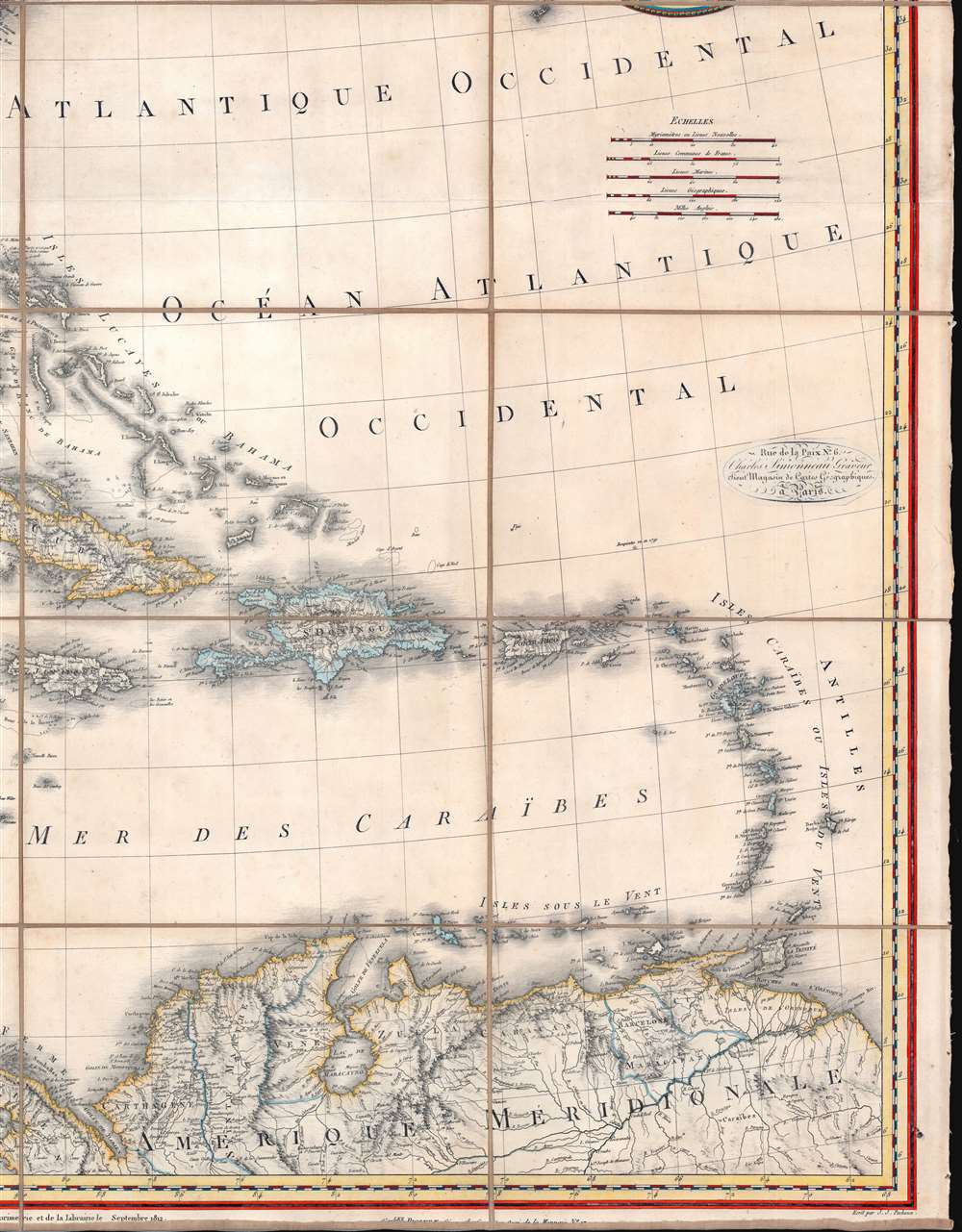 A lavish and beautiful large-scale French map of the United States and West Indies issued in September of 1812 - shortly after the outbreak of the War of 1812 (1812 - 1815). This is one of the few major French cartographic productions not focused on Europe to appear during the Napoleonic Wars (1803 - 1815) and needs to be addressed in this context to be fully understood. The map covers the United States and West Indies, extending west as far as Texas and Mexico City, and South to include the Gulf of Mexico, Greater and Lesser Antilles, Caribbean Sea, and Spanish Main. The whole has been masterfully engraved by Pierre Antoine-Francois Tardieu. The upper right title cartouche is decorated by an American Bald Eagle.

There are two known editions of the map - the present example being the scarcer of the two - both of which correspond to pivotal moments in Franco-American relations. The map first appeared in 1806 - shortly after the Louisiana Purchase during a time when French influence in America was being redefined. The second, present example, was published in September of 1812, shortly after the outbreak of the War of 1812. Cartographically, the map of 1812 differs little from the 1806 edition. Despite a wealth of information from the Lewis and Clark Expedition, Louisiana remains largely blank and unexplored. Florida, divided into East and West Florida, is identified as a Spanish possession - according to the Second Spanish Period (1783- 1819).

When scholars write of the War of 1812, the role of France is often relegated to a footnote at best. At the outbreak of the War, fought between England and the United States, Europe was enmeshed in the Napoleonic Wars. The powerful English navy had largely locked down French maritime trade. American ships were the only trade vessels granted access to French Ports - providing a vital artery for French trade. This fact was used to justify the British retaliatory practice of 'impressing' American merchant sailors into naval service - the primary impetus for the 1812 declaration of war. Scholarly focus on the French role in the war, tends revolve around how the European wars limited England's ability to wage war in the Americas. Or, where France is discussed, the focus is on Napoleon's disinterest in the United States, and the general preference of most Americans, despite being at war, for England.

Nonetheless, among the French populace, the outbreak of the War of 1812 was perceived differently - it was a moment that could have ushered a new era of Franco-American alliance. The French had every reason to believe that the many problems souring Franco-American relations - depredations on commerce, imprisonment of sailors, settlement of indemnities, and the lack of a trade agreement - would be resolved. The team of well-respected French cartographers who compiled this map - a lavish optimistic production - titled it in both French and English, underscoring that it was intended for both French and American (certainly not English!) audiences. The map can be seen as a call for alliance and brotherhood.

The hoped-for Franco-American alliance never came to be. Napoleon, distracted by a multi-front war and a growing string of setbacks, ignored American entreaties. By the end of the War of 1812, Napoleon's armies were defeated and the emperor himself exiled to Elba. The newly established Bourbon government was sympathetic to the United States, but after years of war, France was in too weak a position to build mutually-beneficial alliances. Moreover, will all sides declaring victory in the War of 1812, US-British trade relations fully resumed.

This map was a lavish production that involved the efforts of four of Paris' most prominent publishers/engravers. These include Pierre Lapie, Pierre Antoine-Francois Tardieu, Charles Picquet, and Jean-Claude Dezauche. The fine lettering was engraved by J. J. Pachoux. Below the right title cartouche, a pastedown advertises the geographical and engraving establishment of Charles Simmoneau - likely where this map was initially sold. The map bears two cartouches with separate titles (United States, and West Indies), suggesting it was intended to be issued either in composite form, as here, or separately. Accordingly, the Toronto Public Library holds a version that cuts the map through central Florida with an engraved graduated border, and the Library of Congress owns a southern sheet focusing on the West Indies. There are two known editions of the map, as stated above, 1806 and the present 1812 edition. In 1861, likely in an attempt to capitalize on the American Civil War, August Logerot issued another edition of the northern sections.

This map is scarce - especially as here with the West Indies component. We have identified several examples of the 1806, but the OCLC identifies only two library holding the 1812, Harvard and the University of Michigan. This addition is also held by several European libraries, including the Universiteitsbibliotheek Utrecht. Due to weak cataloging, it is not clear if these holdings represent the upper portion only, or, as here, both the United States and the West Indies.


Pierre Antoine-François Tardieu (February 17, 1757 - January 14, 1822), also known as Tardieu de l'Estrapade, for his address at Place de L'Estrapade, was a French geographical engraver and publisher active in Paris during the late 18th and early 19th centuries. A member of the large and prolific Tardieu family, which, for over 200 years, produced multiple skilled and active engravers. A disciple of his uncle Pierre-François Tardieu, in his youth Antoine-Francois would sign his works Pierre-François (or P.F. Tardieu; 1711 - 1771) , but later in his career began using his own name or (P.A.F. Tardieu). His two sons, Pierre-Antoine Tardieu and Ambroise Tardieu (1788 - 1841), both became noted geographical engravers in the own right. Learn More...

Very good. Minor damage to upper right and bottom left corners - where the map may have been tacked early in its life. Laid down on old linen. Stable.