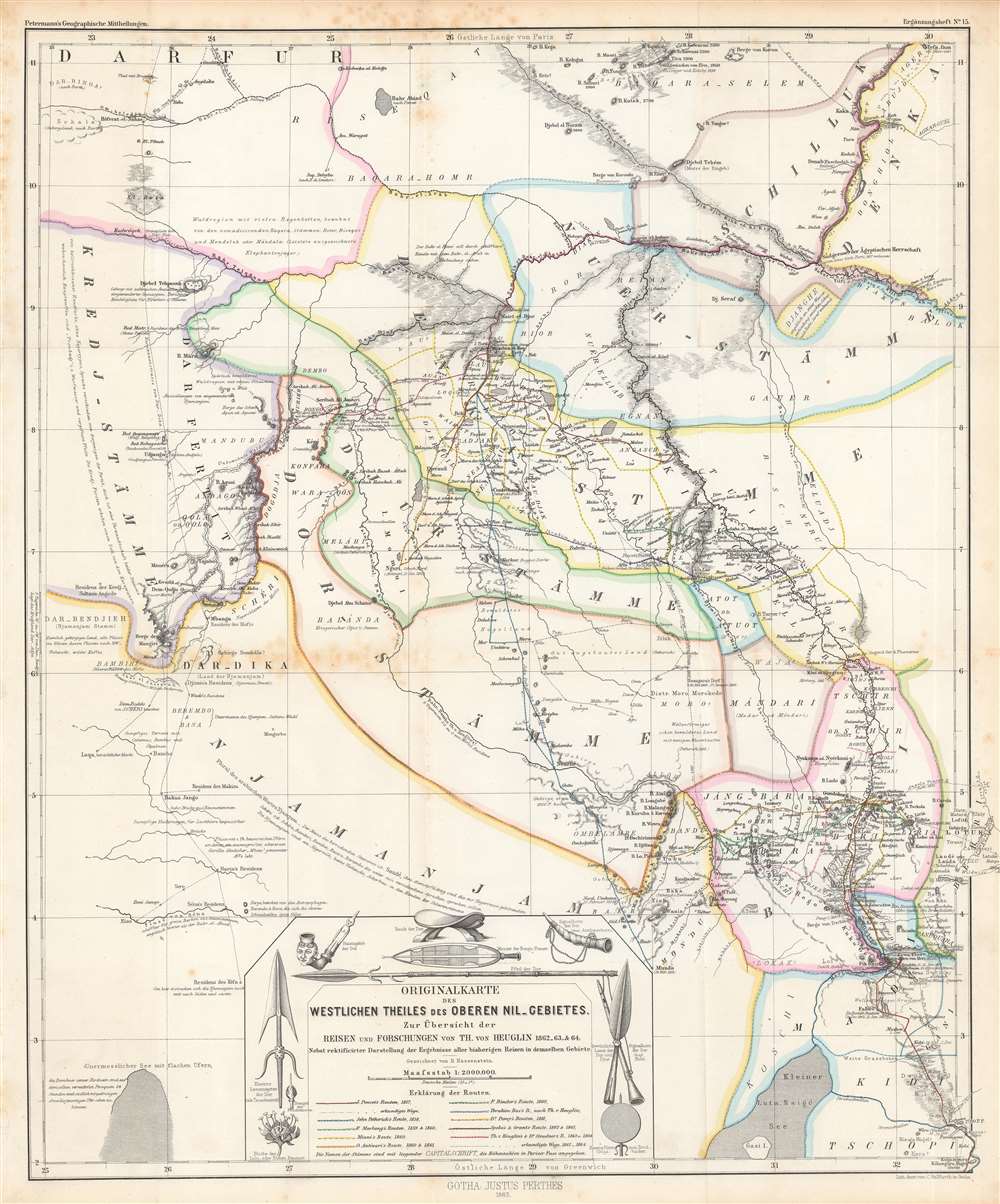 This is a detailed 1865 Bruno Hassenstein map of the Upper White Nile, concurrent with the eastern part of today's South Sudan. It traces the routes of German and other European explorers of the mid-19th century, including those whose journeys had recently concluded in the months and years prior to publication.

This map covers an area that today includes the eastern part of South Sudan into northern Uganda, along the White Nile. Two major river systems dominate the map, the Bahr al Jabal (Bahr-el-Djebel) and the Bahr el Ghazal (Bahr-el-Ghasal), which meet at Lake No (See No) towards top-right. To the left side is the vast wetland or swamp known as the Sudd, a name derived from the Arabic word for barrier or obstruction, which the region proved to be from ancient times onwards for any empire or outsiders looking to explore or control the area. Even as this map was published to highlight the progress of European exploration along the Nile, the Sudd and areas to the south remained largely unknown.

With beautiful hand-coloring, the map illustrates the rough boundaries between different tribes and kingdoms as well as the routes taken by earlier European explorers and administrators, which are noted in the legend. Special attention is given to the recent expedition of Theodor von Heuglin (1824 – 1876). Soon after this map was made, European administrators in the employ of the British-backed Mehmet Ali Dynasty in Egypt, including Charles 'Chinese' Gordon and Emin Pasha, would oversee the region, much of which fell under the province of Equatoria.

Geographic information, especially the all-important waterways, are highlighted. The map utilizes Parisian feet for elevation and uses both Greenwich and Paris as Prime Meridians, while German miles are employed for determining scale. A cartouche includes illustrations of local cultural and military items as well as flora.

This map was drawn by Bruno Hassenstein and lithographed by Carl Hellfarth of the publisher Justus Perthes in Gotha in 1865 as Supplement (Ergänzungsheft) No. 15 to the periodical Petermann's Geographische Mitteilungen. The full distribution of the map is difficult to determine due to inconsistent cataloging, but it is known to be held by the British Library, the Bibliothèque nationale de France, the Staatsbibliothek zu Berlin, and the Bayerische Staatsbibliothek, and it is scarce to the market.