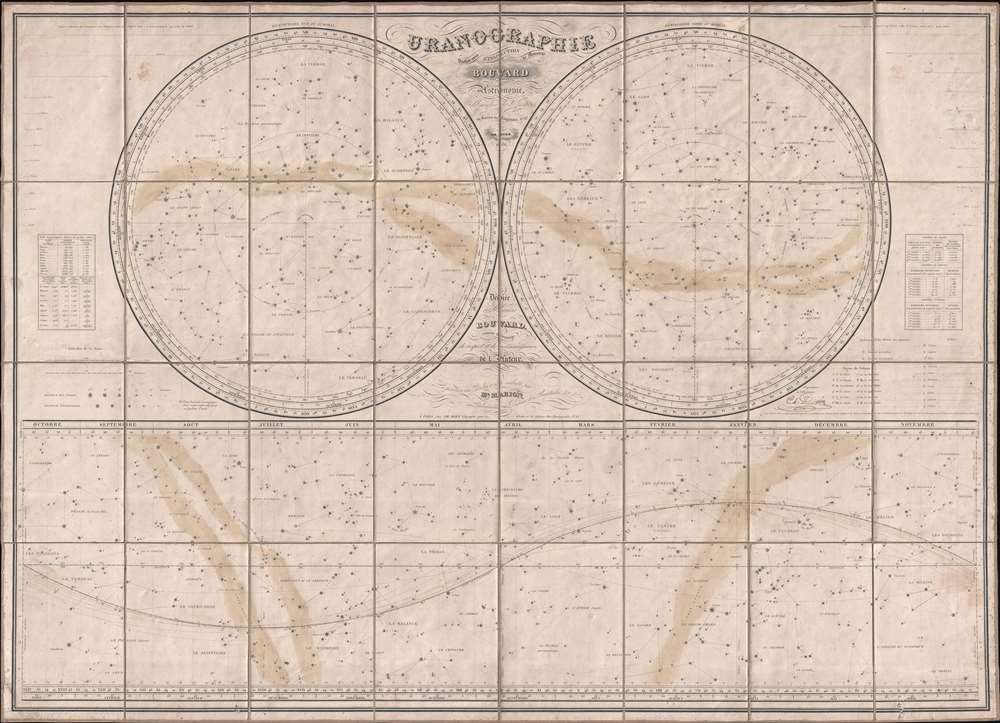 A large and incredibly rare French celestial chart - one of the first to depict the stars in a more scientific manner.

This is an 1831 Charles Dien celestial chart or uranography of the stars in two hemispheres. Uranography is the branch of astronomy concerned with the description and mapping of the heavens, and especially the fixed stars. Dien's chart represents a radical shift from the much more decorative and beautiful celestial charts of the preceding centuries toward a more understated, businesslike, and scientific approach. Here, Dien simply connects the stars the stars with lines, leading to the creation of geometric figures instead of elaborate illustrations. Each constellation is labeled in both the northern and southern hemisphere, and the Milky Way is illustrated looping its way across the night sky. An equatorial sky map is situated below the two hemispheres which depicts the ecliptic (the path of the Sun) over the course of a calendar year from March to April.

A table situated along the left border contains information concerning the orbital distance traveled by the various planets, the median distance to the Sun, the relative diameters of other celestial bodies relative to the Earth, and each planet's rotations. A table along the right border lists the moons of Jupiter, Saturn, and Uranus.

This chart was created by Charles Dien and supervised by Alexis Bouvard in 1831, most likely while both men were working at the Observatoire de Paris. We are aware of two examples in institutional collections: one is located in the collection of the Bibliothèque Nationale de France in Paris and the other is part of the collection of the Linda Hall Library in Kansas City, Missouri. We believe that no examples have come to the private market.

Charles Dien Jr. (February 9, 1800 - 1870) was a French cartographer, astronomer, engineer, and globe maker associated with the observatory of Paris. Dien inherited his map-publishing business from his father, Charles Dien Sr. He is the author of several books and manuals concerning the use of scientific instruments and was a frequent collaborator with Félix Delamarche. Dien was responsible for many improvements in globe making, as described by M. Charles Dupin,

M. Dien has made many improvements upon the paper globes in common use. He has rendered them much less hygrometric; he makes the meridian and the horizon in which the globe moves, of copper. These circles are moveable by means of wheel-work.

Alexis Bouvard (June 27, 1767 - June 7, 1843) was a French astronomer. Born in Contamines-Montjoie, Bouvard, who came from a family with four other children, left for Paris on his own at the age of seventeen. Once in Paris, he found his was to the Bureau des longitudes and the Observatory of Paris, where he was became a student astronomer. Eventually, Bouvard was named the director of the Observatory of Paris. Among his achievements include the discovery of eight comets and the compilation of the astronomical tables for Jupiter, Saturn, and Uranus. While the first two tables were a complete success, the latter contained substantial discrepancies with calculations performed at other observatories. This led Bouvard to hypothesize the existence of an eighth planet which created the irregularities in Uranus' orbit. John Couch Adams and Urban Le Verrier would independently discover the planet Neptune by using calculations based on Bouvard's observations, though only after Bouvard had died. Learn More...

Very good. Dissected and mounted on original linen in 32 panels. Even overall toning. Blank on verso.