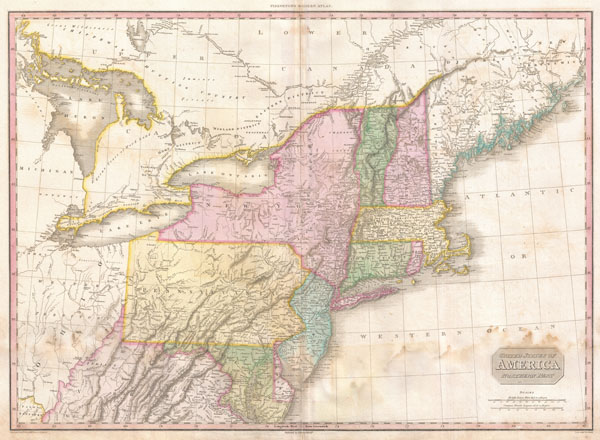 John Pinkerton's highly decorative and important map of the northern parts of the United States, published 1818. Covers from Lake Huron eastward as far as New Brunswick and southwards as far as the Chesapeake Bay. Includes the states of New York, New Jersey, Pennsylvania, Connecticut, Rhode Island, Vermont, New Hampshire, Maryland, Delaware and Virginia. Also includes the districts of Maine, parts of the Western Territory, including Michigan and Ohio, and adjacent portions of Canada.

Pinkerton's map is full of interesting detail from the American Indian lands in the western portions of the map, to notations on river navigation, to the configuration of the early states. Notes Connecticut's Western reserve in what is today Ohio. This territory was a legacy of Connecticut's original coast to coast charter and we settled in the early 19th century by New England emigrants.

Good condition. Original centerfold. Dampstaining in lower quadrants - please examine image - for which we have discounted this normally 750 USD map. Blank on verso.