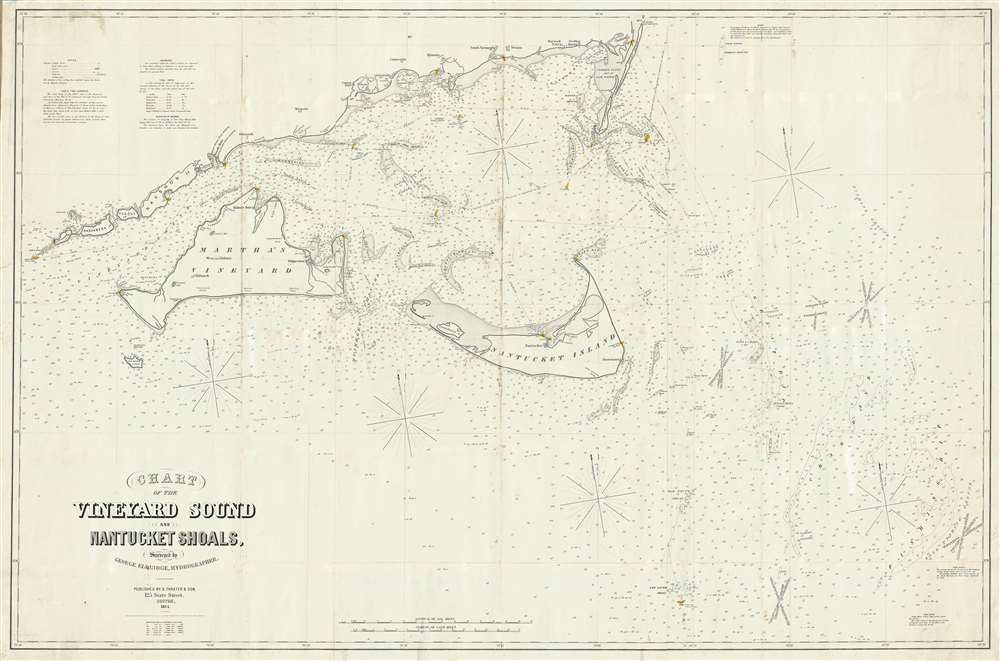 This is George Eldridge’s enormous and important large-format 1864 blueback nautical chart of the waters around Nantucket and Martha’s Vineyard, including Vineyard Sound and the Nantucket Shoals. Most likely Eldridge's most important and useful publication, this chart offers hundreds of depth soundings, along with notations about shoals and other hazards, lighthouses and other aids to navigation, tides, currents and compass variations, sailing directions, and other information pertinent to the mariner. The staggering size of this map as well as its extraordinary overall detail underscore the importance of these waters not only as an international shipping channel, but also for the vibrant local maritime community, of which included Eldridge. The present chart is one of Eldridge’s most important charts with an active period of more than 40 years.

The waters around Martha's Vineyard and Nantucket were long considered dangerous and difficult to navigate despite being both an important maritime artery on the London-New York shipping route, and an essential fishery. The harsh conditions, including rapid unexpected swells and frequent heavy fog, contrived to make the hazards south of Nantucket and Martha's Vineyard some of the most dangerous and challenging areas to hydrographically survey. Moreover, there were a plethora of poorly realized, outdated, and outright speculative commercial charts, many coming from British publishers incorporating data dating to the Revolutionary War. For these reasons, the U.S. Coast Survey chose the Nantucket-Martha's Vineyard-Buzzard Bay corridor as the focus for their earliest charting efforts. Under Lieutenant Commander Charles H. Davis, these waters slowly took shape, with excellent detailed surveys, performed over numerous years under harsh conditions ultimately revealing the inaccuracies of earlier efforts. What the U.S.C.S. failed to produce until around 1860, were large format nautical charts useful for the mariner - instead their publications were limited to small format maps in bound congressional reports. Until the U.S.C.S. began issuing its own superior large format charts, most of their charting efforts, as they impacted the day-to-day mariner, were consolidated by private chart publishing houses, like Blunt and Eldridge. In particular, Eldridge's work around Martha's Vineyard and Nantucket, became highly influential and remained in use well into the 20th century.

George Eldridge first issued this chart in 1857 as an update to his earlier Chart of Vineyard Sound, From Chatham Lights to Gay Head. The map is copyrighted, 1857, in partnership with Samuel T. (Thaxter) Cushing (1821 - 1882), the publisher. It was updated and reissued in 1864, as the present example. In 1865 a new copyright was filed, and subsequent editions bear an 1865 copyright, leading some to mistakenly believe 1865 the first edition. Subsequent editions are cataloged in 1874, 1883, and 1891. The map was engraved George Washington Boynton, and published by Samuel Thaxter and Son of Boston.

Although we have identified many examples of this chart in other editions, this is one of only two examples of the 1864 issue known, the other being in the British Library. It is conceivable that Eldridge and Thaxter, aware that the major copyright update of 1865 was about to be issued, chose to limit production of the 1864 issue.

George Eldridge (November, 1821 - August, 1900) and his son George Washington Eldridge (1845 - 1912) were American makers of Nautical Charts and Pilot Books active in the late 19th century. George Eldridge was Cape Cod fisherman known locally as an excellent ship's pilot. While recuperating from an injury in 1851, Eldridge drew his first nautical chart. The chart proved popular and its success led Eldridge to pursue a career in hydrography - the science of mapping the sea with a special focus on navigation. Eldridge produced numerous subsequent maps and is credited with issuing some of the earliest accurate nautical charts of the American Atlantic coast. In time George Eldridge passed his thriving business on to his son, George Washington Eldridge, who continued to produce beautiful, practical, maritime charts well into the early 19th century. Though most of Eldridge's charts were loosely based on U.S. Coast Survey work, they proved popular with navigators a talent, shared by both father and son, for distilling the often convoluted Coast Survey maps into practical nautical chart charts for the working mariner. From 1875, in addition to large format independently issued nautical charts, Eldridge also issued annual editions of Eldridge's Tide and Pilot Book and The Book of Harbor Charts. The Eldridge offices were located at 103 State St. Boston, Massachusetts. Learn More...


Samuel Thaxter and Son (fl. 1722 - 1916). Samuel Thaxter (1769 - 1842) is the founder of a Boston dynasty of manufactures of mathematical instruments and nautical charts. He founded the firm in 1792 and is first referenced in the 1796 Boston Directory. Around 1822 he incorporated his son, Joseph H. Thaxter (1801 - 1835), into the business renaming it 'Samuel Thaxter and Son'. The firm would retain this name for the remainder of its existence. This successful business was subsequently passed to Joseph H. Thaxter's son, Samuel Thaxter Cushing (1821 - 1882), in 1843. It was Thaxter Cushing who developed the firm's publishing arm, partnering with the Boston nautical chart maker George Eldridge. They are best known for 13 large format blueback charts focusing on the east cost of the United States published in the second half of the 19th century. They also published numerous smaller maps and pilot books. After Thaxter Cushing died the firm was taken over by his widow, Abby C. Cushing, who managed it until 1905. It was subsequently managed by Herbert Risteen Starratt and continued to be registered in the Boston Directory until about 1916. Learn More...