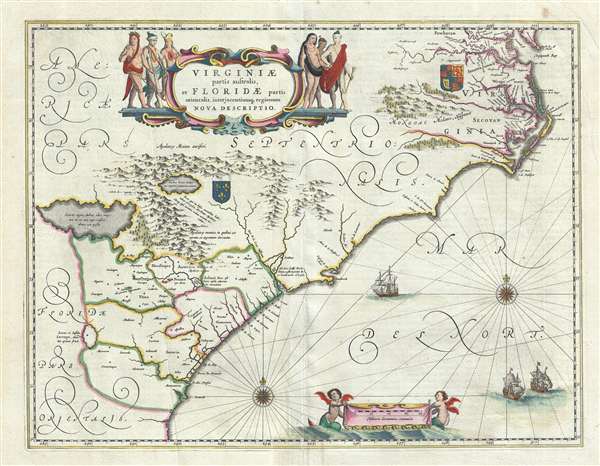 A fine example of Jan Janssonius's 1640 map of the southeastern part of North America. The map covers the Atlantic seaboard form the Chesapeake Bay to Norther Florida, inducing the modern-day states of Virginia, North Carolina, South Carolina, Georgia, and Florida. Jansson's map follows the 1606 Mercator/Hondius map in terms of coverage and inherits much of its cartography and nomenclature, particularly on the interior, but is much improved along the coast.

According to map historian Phillip Burden,

The greatest improvement occurs in the northern half of the map north of Porto Royal. Whereas on the Hondius [map] the coastline towards C. de. Ste. Romano (present day Cape Fear) veered directly east, Blaeu more correctly takes it north-east, placing the cape closer to its true position of 34 degrees. This span of coastline is approximately that of present day South Carolina's. This now presents to us a more accurately proportioned Outer Banks region, radically reduced in size but still slightly too far north. For these improvements, Blaeu drew upon the extremely rare DE EYLANDEN . . . by Hessel Gerritsz., c. 1631. The Outer Banks combine the place names of Gerritsz and Hondius, often using two different ones for the same area . . .

Chesapeake Bay was depicted just as a small bay on Hondius' map of 1606, as John Smith was yet to explore these waters. The Gerritsz terminated at this point, and only two place names appeared. Blaeu draws largely on Smith's map for much of the nomenclature but introduces some English [names] from an unknown source. The most important is Newport Nesa, Newport News, founded in 1621 and apparently shown here for the first time on a printed map. Also new are Bermouth, Stortingen and Arglas . . .

The subtext of this map is the growing conflict between English and French claims on the eastern seaboard. The Royal Arms of England appears in the upper right and the Fleur-de-lis crest of France appears at center. Between them a 'nomans land' roughly equivalent to modern day South Carolina was up for grabs. Although the conflict over these lands was furious in Europe, it was primarily theoretical. While the English were actively settling Virginia, French claims to this part of the New World were not backed up with actual colonization. Instead claims to Floride Françoise, as it would come to be called, were based upon the failed 1562 French attempt to settle northern Florida and Carolina under the leadership of Gaspard de Coligny, Jean Ribault, and René Goulaine de Laudonnière. The Spanish, under Pedro Menéndez de Avilés ousted the French in 1565 and established St. Augustine to defend against a possible French return. The French, despite making no subsequent attempts to resettle the Georgia-Carolina coastline, argued for their claims under 'right of discovery' and 'first settlement' until the French and Indian War (1754 – 1763).

Much of the interior, in particular the assortment of three large, semi-mythical inland lakes, is derived from the 1606 Hondius/Mercator map, which intern is based upon a misunderstanding of the Le Moyne map of Florida. The River May and Lake Apalachy, here identified as the 'Lacus Aquae Dulcis' (Sweet Water Lake) are mapped flowing from the fictional lakes to the northwest. Where Le Moyne correctly mapped the River May (St. John’s River, Florida) in an inverted 'V' form, first heading north, then south to meet with a large inland lake (likely Lake George or one of the other great inland lakes of Florida), Hondius maps the course of the May heading from the northwest, thus relocating the 'Lacus Aquae Dulcis' far to the north. This error can be understood in terms of magnetic variation, temperature issues associated with isothermal lines, and navigational errors related to the confusion of the star Asfick with Polaris. While Le Moyne correctly located the mouth of the River May at 30 degrees of latitude, Hondius maps it between 31 and 32 degrees. This led to an erroneous association of the River May with the Savannah River. Thus, while the River May dips southward, the Savannah River heads almost directly northwest into the Appalachian Mountains, forming the modern southern border of South Carolina. Hondius, no doubt taking his cue from navigators who rarely trekked inland, therefore rerouted the May River to flow from the northwest. Without an accurate picture if the interior, Hondius followed Le Moyne’s example and translocated the great freshwater lake to the north. Others have speculated that the Le Moyne’s River May is in fact the St. John’s River, and that the 'Lacus Aquae Dulcis' is in fact the Okefenokee Swamp – but this argument does not coincide with most scholarship. The influence of the Mercator-Hondius firm was so pronounced in Europe that most subsequent cartographers followed their lead. Lactus Aquae Dulces appeared in maps by Jansson (as here), de Laet, Janszoon, Blaeu, Allard, Ogilby, Speed, Homann and others well into the 18th century, becoming one of Hondius’ most tenacious legacies.

Another curious and striking element drawn directly from the Le Moyne map is the curious lake fed by an enormous waterfall. To our knowledge, there are but three maps that depict this lake, this being the third. Some believe this unusual lake may have been based on native legends of Niagara Falls. A note near the lake and falls claims the natives of this land find grains of silver in its waters. The sources for this lake are, unfortunately, as unclear in this map as they were in Le Moyne’s, and will most likely remain a mystery. The third mysterious lake, Sarrope, appearing the southwestern quadrant, is most likely a flawed mapping of Lake Okeechobee drawn from Le Moyne, who places it much further to the south in roughly the correct position.

Stylistically this map is also notable for the marked transition between the more baroque Hondius/Mercator/Ortelius 16th century aesthetic and the more florid Janssonius/Blaeu 17th aesthetic. Janssonius and Blaeu did away with the older method of using wavy lines to represent waterways and simplified the layout immensely. The result is an easier, more open, user friendly map.

Like many maps from this period, this map was issued nearly simultaneously by both Willem Jansz Blaeu and Janssonius. It exists in two states, a c. 1638 state and the present 1640 state. Cartographically the states are identical, but the 1640 state has a 'tail' on the left cherub.