1755 Vaugondy Map of the Chesapeake Bay, Virginia, Maryland, and Delaware 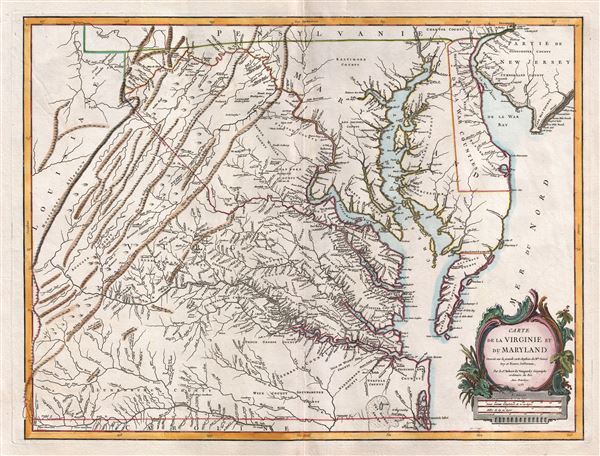 1755 Vaugondy Map of the Chesapeake Bay, Virginia, Maryland, and Delaware

A fine first edition example of Robert de Vaugondy's 1755 map of the Virginian, Delaware, and Maryland, including the Chesapeake Bay. The map extends from the Allegany Mountains eastward to the Chesapeake Bay, Delaware Bay, and Atlantic Ocean. He also includes parts of adjacent New Jersey, Pennsylvania, and North Carolina. Cartographically Vaugondy derives this map from the Virginia-Maryland portions of the 1755 Dalrymple edition of the Fry-Jefferson map.

Vaugondy's map offers a wealth of interesting detail. These include two stunted wagon routes extending west from Maryland, then across the Potomac, that seem to fade away as they head southwest towards Frederick. Another stunted path to the west of the Blue Ridge Mountains is labeled 'Route Indianne.' The limits of Lord Fairfax's massive grant are outlined in red - a feature limited to this first edition of Vaugondy's map. Throughout mills, settlements, and even American Indian lands are noted.
Looking for a high-resolution scan of this?