1859 Direccion Hidrografia Nautical Chart or Map of the Virgin Islands 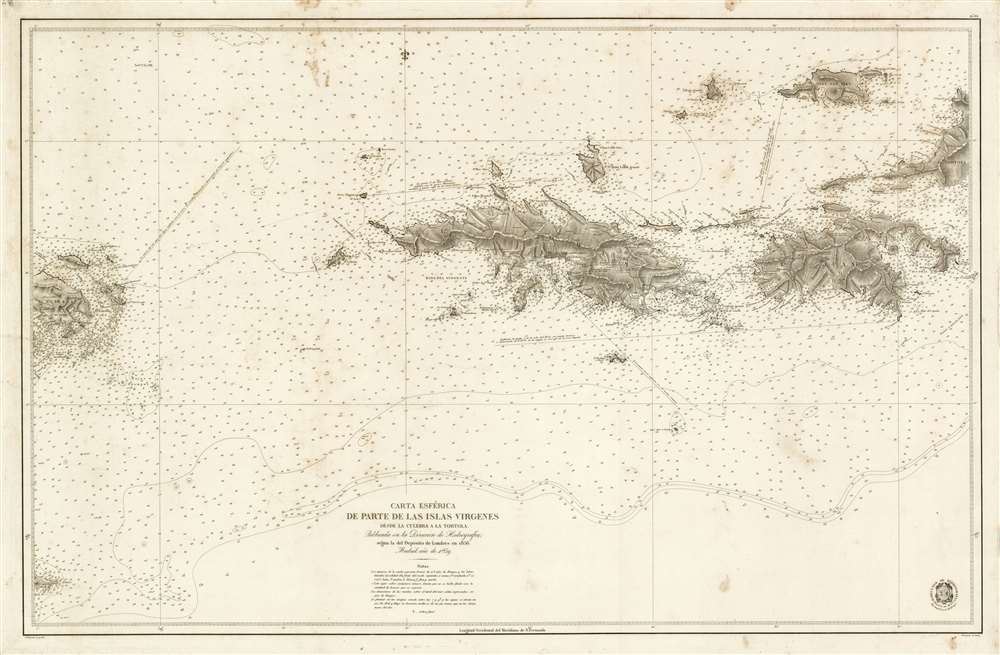 1859 Direccion Hidrografia Nautical Chart or Map of the Virgin Islands

Rare map of the Virgin Islands in the final days of the Danish West Indies.

A stunningly engraved 1859 Dirección Hidrografía nautical chart or maritime map of the Virgin Islands, including the U.S. Virgin Islands of St. Thomas and St. John. Centered on St. Thomas, the map covers from Isla de Culbera (Puerto Rico) to the island of Tortola (British Virgin Islands), and from Jost Van Dyke as far south as Vieques. The chart exhibits meticulously rendered topography and illustrates cities and towns in exacting detail, showing individual streets, blocks, and even important buildings throughout. At sea, there are countless soundings and other information useful to the navigator.

When this map was issued, these islands were Royal Danish Colonies administered as the Danish West Indian Islands (De dansk-vestindiske øer). The archipelago been under Danish control since 1762, when it was settled by the Danish West India Company (Det Vestindisk-Guineisk kompagni). They became Royal Danish colonies in 1754. After several violent slave revolts and a fall in sugar prices during the early 19th century, Danish plantation owners began to abandon their now unprofitable estates, pushing the islands into a deep economic decline. The United States began to show an interest in the 1860s and, in 1867, a provisional agreement was put in place to acquire the Danish Virgin Islands for 7.5 million USD. The proposition failed in Congress, but was revived during World War I, when the United States feared the islands would be seized by Germany and used as a submarine base to harass US shipping. After much back and forth, the Treaty of the Danish West Indies was signed in August of 1916, which, after a referendum in Denmark, sold the islands to the United States for 25 million USD.

This first edition nautical chart was issued in 1859. Cartographically it is derived from British hydrographic work dating to 1856. The chart was published by the Dirección Hidrografía. The map itself was engraved by Juan Estruch, with Francisco Bregante y Orbay completing the letter engraving. We are aware of only one edition.

This map is rare. There are two entries in the OCLC, with verifiable holdings at the Museu Marrītime de Barcelona and the Biblioteca de Catalunya. There are at least 3 examples, including the presently offered map, currently in private hands.


Juan Estruch (1820 - 1883) was a Catalan line engraver active in Madrid with the Dirección Hidrografía in the middle part of the 19th century. Estruch was born in Barcelona and studied engraving under his father, Doming Estruch y Jordan (1796 - 1851) also an engraver, and at the Escuela de Comercio y Bellas Artes, gradating in 1836. He then traveled to Italy to study under master engraver D. Pablo Toschi de Parma. He returned to Spain in 1840 and by about 1845 had taken a position with the Dirección Hidrografía. In addition to his work for the Dirección Hidrografía, he completed commercial portrait and certificate engraving, and map engraving for Vincente López and Francisco Coello. By 1872 he was the first engraver a the Depósito Hidrográfico. Learn More...