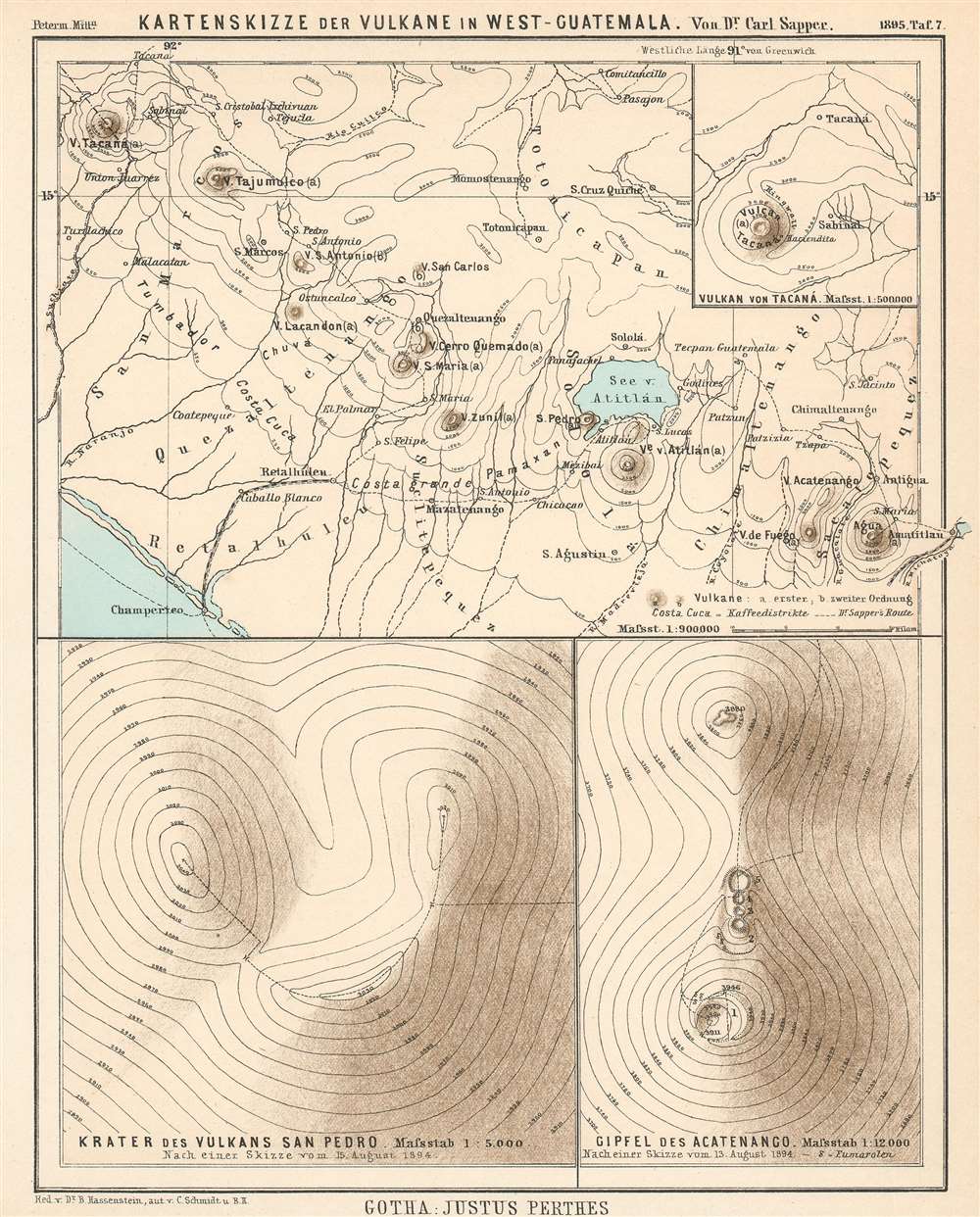 Highlights many of Guatemala's volcanoes, three of which are currently active.
$150.00

This is an 1895 Bruno Hassenstein map of volcanoes in western Guatemala. It depicts western Guatemala from the Tacaná Volcano on the Guatemala-Mexico border to Amatitlán and Lake Amatitlán, numerous volcanoes are illustrated and labeled, including the Volcán de Agua, the Volcán de Fuego, and the Volcán de Santa Maria. Cities and towns throughout the region are also labeled, along with rivers and the Lago de Atitlán. A dashed line marks the route followed by Dr. Sapper through the region. Topography lines are also illustrated, allowing the viewer some idea of the very mountainous nature of the terrain. An inset map situated in the upper right corner details the region around the Volcán de Tacaná, and labels both the town of Tacaná and Sabinal. Two other insets along the bottom focus on the Volcán San Pedro and the peak of the Volcán Acatenango.

As is evident from the map, a chain of volcanoes, both active and dormant, occupies a northwesterly position in western Guatemala. Thirty-seven volcanoes are spread out across the country, three of which are categorized as currently active: Pacaya (which is not illustrated here – it is situated just off the right side of the map), Fuego, and Santiaguito. Many others, including Acatenango, Santa Maria, Agua, and Atitlán are not fully active or dormant. Two of Guatemala's volcanoes are also the tallest peaks in Central America: Tacaná and Tajumulco.

This map was created and drawn by Bruno Hassenstein, engraved by C. Schmidt, and published by Justus Perthes in an 1895 edition of Dr. A. Petermann's Mitteilungen aus Justus Perthes' Geographischer Anstalt. The OCLC records examples as being part of the institutional collections at the University of Chicago, the University of Oxford, the Bavarian State Library, and The British Library.