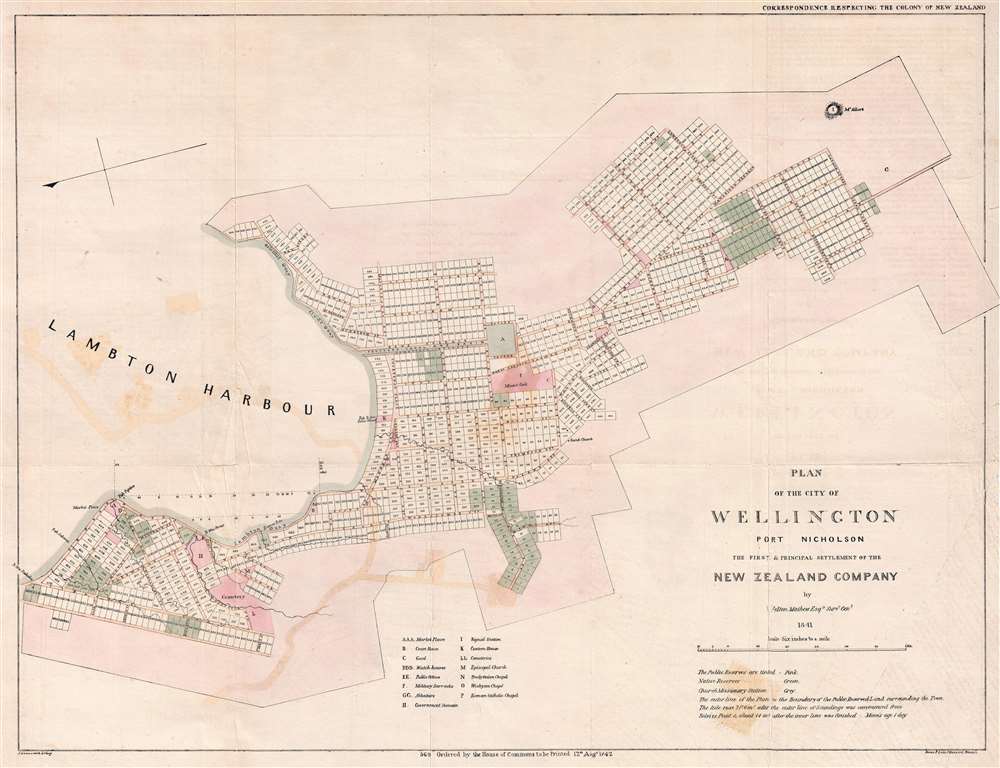 This rare 1841 map of Wellington is one of the earliest obtainable plans of the modern-day capital of New Zealand. The map was surveyed on behalf of the New Zealand Land Company in 1840 by the first Surveyor-General of New Zealand, Felton Mathew. Mathew laid out the new city's road and grid system in precise detail. The street grid shown here is still reflected in the modern city. This map was issued in 1842 for the House of Commons, probably in conjunction with the Spain Commission, and based upon Mathew's 1840 manuscript survey.

Oriented to the East, with north at the left, the map covers core of modern-day Wellington as it surrounds Lambton Harbor (Wellington Harbor). The original plan includes modern-day Thorndon, Pepitia, Te Aro, Newtown, and Berhampore. The plan is broken up into numbered lots, which were offered to potential colonists for sale, and includes lands reserved for the indigenous Maori peoples. It also identifies locations set aside for markets, a court house, a prison or 'gaol', public offices, cemeteries, military offices, a signal stations, a customs house, various churches, and more. Color coding defines public reserves (pink), properties set aside of the indigenous Maori peoples (green), and lands reserved for religious edifices (grey).

The New Zealand Land Company was a British land speculation company focused on the systematic colonization of New Zealand. Although originally founded in 1825, the company did not pick up steam until its merger with William Wakefield's New Zealand Association in 1837, after which it received an 1840 Royal Charter. Despite the privileges granted by the Royal Charter, the NZLC was near constantly at odds with the British government's Colonial Office.

Among the more significant points of contention, was the Land Company's dubious approach to the acquisition of property from the indigenous Maori. The Colonial Office required that Company Lands be properly purchased from the Maori. This meant that it was the Land Company's responsibility to show that the Maori sellers not only had the authority to sell the land, but understood that by doing so they were giving up all rights to the lands in question. They were also required to have iron clad (at least by British law) contracts signed by all parties.

When Land Company officers purchased lands from the Maori tribes residing in what is today Wellington, the Company's first and principal settlement, they dealt with only a young minor chief, Te Wharepouri, who, perhaps in a play for local power, claimed negotiating power that he did not have. The most important Maori chiefs in the region, notably those of Te Aro, Pipitea and Kumutoto pā, took little or no part in the proceedings and hotly contested NZLC settlement. As a result, the Crown did not formally recognize the Land Company's claims and the Colonial Office appointed the Hampshire attorney William Spain to begin an inquiry into the purchases.

Ultimately, Spain ratified most of the Land Company's claims, but required Wakefield to further compensate the Maori by provided them with land grands in Wellington equal to 1/10th of the area. These grants, highlighted here in green, were supposed to be randomly assigned by lottery, with the intention being that the Maori would be distributed among the colonial population in such a way that proximity would cure them of what Jerningham Wakefield called their 'rude and uncivilized habits.' Although a few plots do seem to be assigned somewhat randomly, by far the bulk of the Maori grants are clustered together in large blocks at the periphery of the settlement. It also noteworthy that the Spain Commission required that the Maori grands be inalienable to prevent them from being sold to land speculators.

This map is based upon a surviving 1840 - 1841 manuscript survey by Felton Mathew. It was engraved in London by John Arrowsmith, and printed by government contract printers James and Luke Graves Hansard (1777-1851). This map is rare. We have identified only one other example located at the British Library.

Felton Mathew (1801 - November 26, 1847) was a British surveyor active in New Zealand during the early colonial period. Felton was born in London. Little is known of his early education and upbringing, but he moved to New South Wales in 1829 to work as Assistant-Surveyor of Roads and Bridges. In 1836, the Colonial Office appointed him as official Sydney Town Surveyor. This position that was voided in 1839, when the Colonial Office determined that Australian states would thereafter manager their own affairs. Without work, Mathew took up an offer to become the first Surveyor-General of New Zealand. There, he completed several important surveys laying out the city plans for Auckland and Wellington. Mathews returned to England in 1845, and again in 1847. On this last trip he fell ill and disembarked in Lima, Peru, where he succumbed to his illness and died. Learn More...


Luke Hansard (July 5, 1752 - October 29, 1828) was an English printer active in London during the early late 18th and early 19th century. Hansard was born in St. Mary's Parish, Norwich and attended Kirton Grammar School in Lincolnshire. Following grammar school, he apprenticed with Stephen White, a printer in Norwich. At the end of his apprenticeship he relocated to London where he took work with John Hughes (1703-1771), a printer for the House of Commons. Hard work and good relationship with the Hughes family led to Hansard being made partner in 1774 and by 1800, the he held full ownership of the Hughes firm, which he renamed Luke Hansard and Sons. The firm continued to publish books and maps for the House of Commons, including the Journals of the House of Commons. The business was mostly taken over by his son James and Luke Graves Hansard. Another son, Thomas Curson Hansard (November 6, 1776 - May 5, 1833), ran another separate press from about 1803, is known for printing Parliamentary Debates. The firm, Hansard, continues to publish to this day. Learn More...