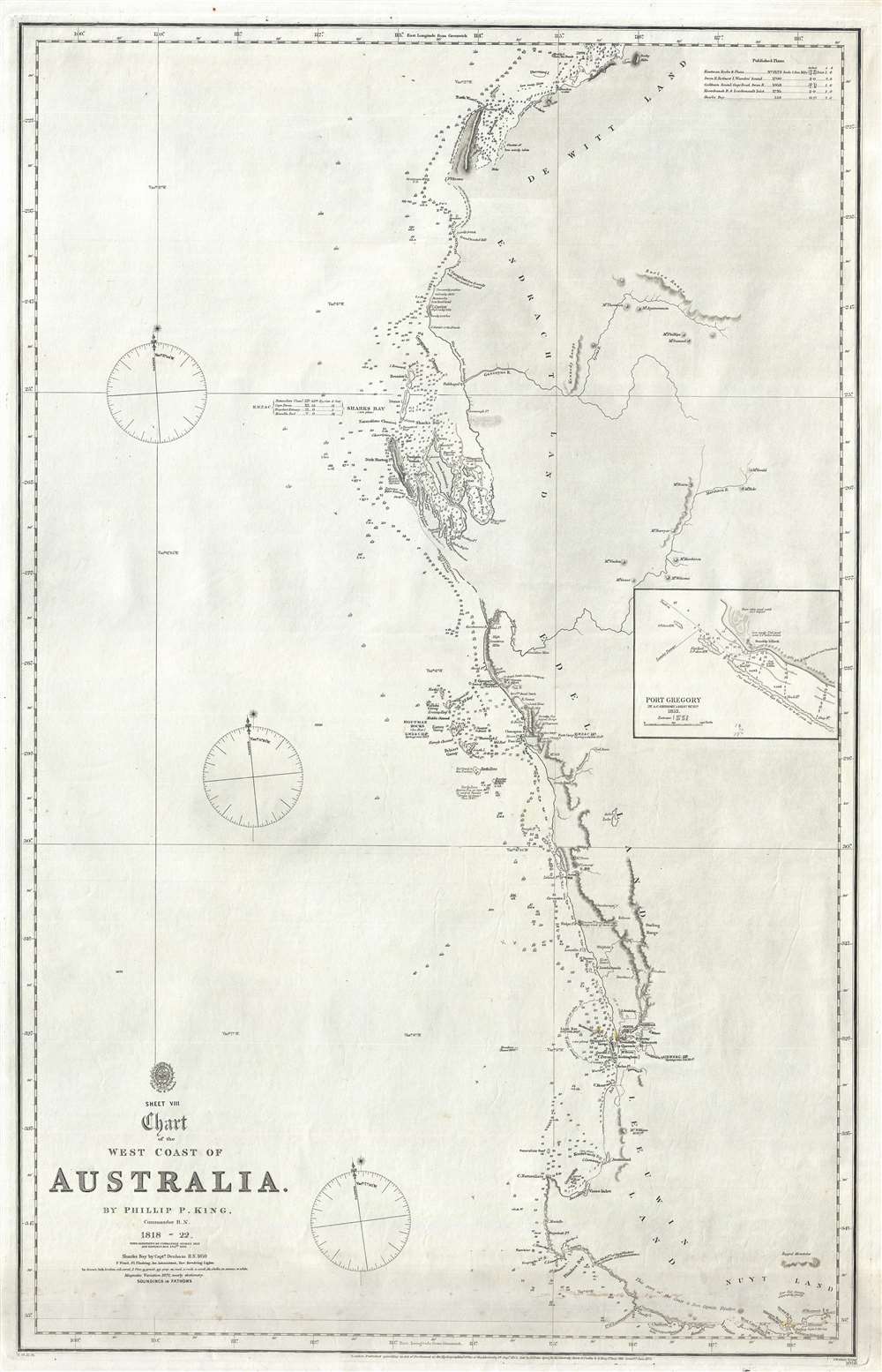 An extremely rare 1872 British Admiralty nautical chart or maritime map of western Australia by Phillip Parker King. The map covers southwestern Australia roughly from Exmouth Gulf to modern day Albany and the Point King Light, including the city of Perth. This chart constitutes a major chapter in the mapping of western Australia. It was originally surveyed by King between 1818 and 1822. King's mission was to fill in the gaps in exploration left by Matthew Flinders. The present edition features updates by Commander John Lort Stokes (1842), John Septimus Roe (1855), and Captain Henry Mangles Denham (1859). The chart includes De Witt Land, Endracht Land, Edel land, Leeuwin Land, and Nuyt Land. The coasts of Nuyt and Leeuwin Lands are drawn from the work of Flinders with few updates. This edition of the map is notable for its inclusion of the 1859 mapping of Sharks Bay by Captain Henry Mangles Denham. Today Sharks Bay is a World Heritage site known for its Stromatolites, considered the oldest lifeforms on Earth. Despite many improvements, much of the coast, particularly north of Shark's Bay, remains only ghosted in and remained only tenuously known. Updates subsequent to 1859 are limited to magnetic variation.

This map was printed by John Walker for the British Admiralty Hydrographic Office as chart number 1056. The original seller for this chart appears to have been J. D. Potter, of King Street, Tower Hill, London. It subsequently found its way to Melbourne, Australia, where it was sold by Blundell and Ford, Agents for the sale of Admiralty Charts. All examples of this chart in all editions are extremely rare. We have identified no other examples of the present 1872 edition. Two examples of the 1842 edition, after the Stokes updates, are known, one at the National Library of Australia, and another at the State Library of New South Wales.

Admiral Phillip Parker King (December 13, 1791 - February 26, 1856) was an early explorer of the Australian and Patagonian coasts. Born on Norfolk Island of the coast of Australia, he was named after his father’s mentor Admiral Arthur Phillip, first governor of New South Wales and the founder of the British penal colony which became the city of Sydney in Australia). King was sent to England in 1796 for further education and he joined the Royal Naval Academy in 1802. He entered the navy in 1807 and was commissioned as a lieutenant in 1814. King was assigned to survey the unexplored portions of the coast of Australia and he made four voyages between December 1817 and April 1822. His main objective from the Admiralty was to try and locate a river which was 'likely to lead to an interior navigation into this great continent.' The Colonial Office also wanted information concerning topography, fauna, timber, minerals, climate, and the natives and the possibility of developing trade with them. King was promoted to commander in 1821 and returned to England in 1823. He was then given command of the HMS Adventure and sent on a five year survey expedition (1826 - 1830) of the coasts around Tierra del Fuego and the Straits of Magellan. King appears to have retired from active naval service sometime after this voyage, as the next reference is to entertaining Charles Darwin at his home in Sydney in 1836. King was appointed to the New South Wales Legislative Council in 1839 and as the resident commissioner of the Australian Agricultural Company that same year, a position he held for ten years. King was promoted to Rear Admiral on the retired list in 1855.

Very good. Some soiling at bottom.