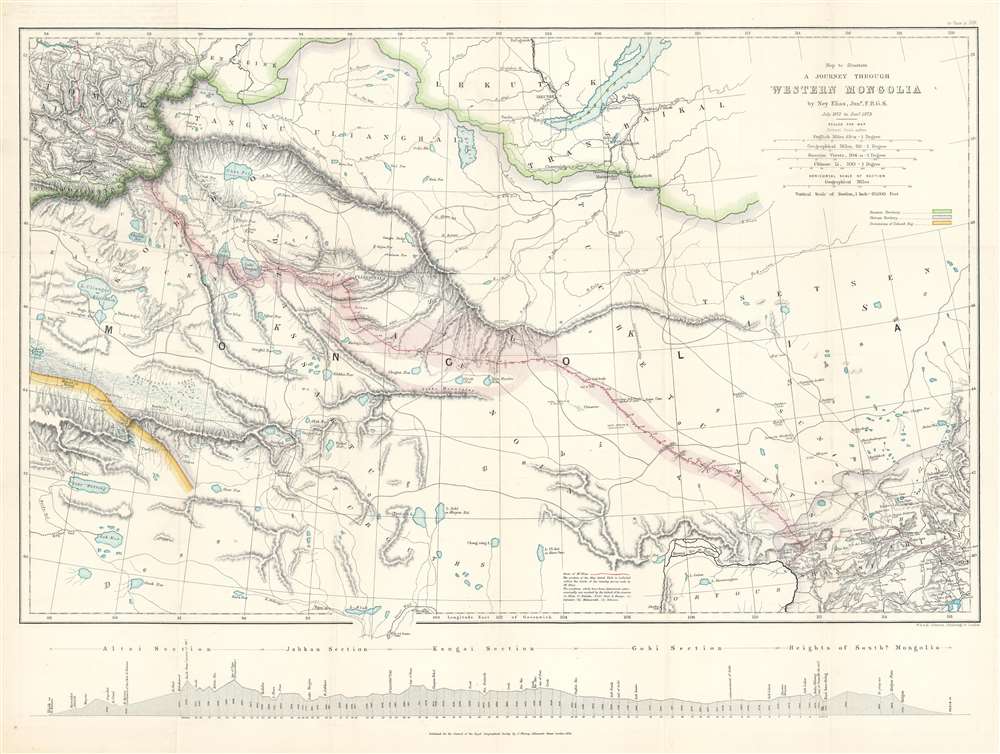 A 'Great Game' reconnaissance expedition from Beijing across the Gobi.
$800.00

This is an 1873 Ney Elias map of western Mongolia. Although not specifically described as such, this map and the Elias expedition were most likely British reconnaissance related to 'The Great Game'. This map was drawn by Elias after his 1872 expedition through the region. A thin red line follows his progress from Beijing (Peking), China, across the Gobi Desert to Bisk in Russia, where he arrived on January 4th, 1873. Elias marks each day's progress along his route and labels Uliassutai, the largest settlement he encountered. The pink shading around Elias's route highlights the limits of the surveys conducted by Elias during the expedition. Karakorum, which Elias refers to as the 'ancient Tartar capital', is marked in two places, suggesting ambugity over its actual location. The map traces the Great Wall along the bottom border, with the wall and the rivers leading from Lake Alak, Lake Tsui-yan, and Lake Sobi breaking the map's bottom border. Numerous lakes of varying sizes appear throughout.

The Expedition and the Survey

Elias left Beijing in July 1872 accompanied by a Chinese servant and traveled almost 2,500 miles across the Gobi Desert to the Russian border and then continued another 2,300 miles to Nizhny Novgorod. Along the way, he made astronomical measurements and other scientific observations. The locations of his readings are marked here with his initial (E). Other expedition routes are also traced, and geographical locations recorded by these individuals marked with their initials. A profile view of Elias's route appears along the bottom border.

Three international boundaries are delineated on the map using shading. Chinese territory, in the lower right corner, is shaded purple. Russian territory is marked by the green line along the top portion of the map, and the yellow on the lower right highlights 'Dominions of Yakoob Beg,' the Uzbek adventurer and ruler of Yettishar (Kashgaria). The white territory, through which Elias traveled, is disputed territory that had been overrun by the Tungani Rebels led by Yaqub Beg.

This map was created by Ney Elias, engraved by the firm founded by William and Alexander Keith Johnston, and published by the Royal Geographical Society in 1873. An example is part of the collection at Princeton University. An empty OCLC reference exists for this map, suggesting that a former cooperative member created it.

Ney Elias (Febraury 10, 1844 - May 31, 1897) was an English geographer, explorer, and diplomat. Born in Widmore, Kent, Elias was educated in London, Paris, and Dresden. He became a fellow of the Royal Geographical Society in 1865. He went to Shanghai as an employee of a mercantile house in 1866. In 1868, he volunteered to lead an expedition to examine the old and new courses of the Yellow River, which he recounted in a paper for the Royal Geographical Society. He left on his next expedition in July 1872, when he and a Chinese servant crossed the Gobi Desert, a distance of nearly 2,500 miles from the Great Wall to the Russian border. They then continued another 2,300 miles to Nizhny Novgorod. Elias chose to attempt such an undertaking during a particularly difficult time: that part of China was overrun by the Tungani rebels at the time, causing him weeks of sleepless nights and constant fear of attack. Apparently, when Elias finally reached the Russian frontier, the Russian border guards looked at him like he had just fallen from the sky. His geographical work in Mongolia earned him the Founder's Medal of the Royal Geographical Society in May 1873 and a job with the British colonial government in India. He was appointed assistant to the resident at Mandalay in September 1874 and shortly afterward was named second in command of an overland expedition to China. This expedition turned back after the murder of Augustus Raymond Margary. He was a member of Robert Shaw's cancelled expedition to Kashgar, and, already finding himself in Leh, stayed there as British joint-commissioner of Ladakh. On his own initiative, Elias went to Chinese Turkestan in 1879 and, narrowly avoiding 'serious misadventure' gained the official sanction of the Indian government and was assigned to 'special duty' in Yarkund, and Kashgar in 1879 and 1880, respectively, and against in 1885. From 1885 until his retirement in November 1896, Elias participated in numerous expeditions in Central Asia and greatly contributed to the geographical knowledge of the region. Elias died suddenly in London on May 31, 1897. He never married. Learn More...