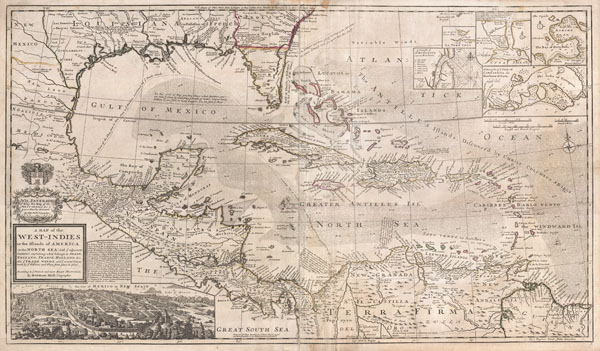 A c. 1720 map guide to English piracy and privateering in the West Indies.

A Map of the West-Indies or the Islands of America in the North Sea; with ye adjacent Countries; explaining what belongs to Spain, England, France, Holland &c. also ye Trade Winds, and ye several Tracts made by ye Galeons and Flota from place to place. According to ye newest and most exact observations, by Herman Moll, Geographer.
c. 1720 (undated)     24 x 40 in (60.96 x 101.6 cm)

One of the most remarkable and intriguing maps of the West Indies to appear in the 18th century. This is Herman Moll's superb circa 1720 mapping of the West Indies, Caribbean, Gulf of Mexico, Mexico, and the Spanish Main. Monumental in proportion, rich in descriptive text, and exhaustive it its attention to detail, this map is best understood as a guide to English piracy and privateering in the West Indies. Moll, most likely through his acquaintance with pirates William Dampier and Woodes Rogers, offers a wealth of information on the traffic of silver bearing Spanish treasure fleets en route from the Mexican port of Veracruz, through the islands, to Spanish ports in Europe.

Following the dotted line, Moll identifies the Spanish treasure fleet's entrada into the Caribbean via the passage between Granada and Trinidad. The fleet then sailed westwards, skirting the Spanish Main until they reached Cartagena, where they rested and reprovisioned before heading northwards, rounding western Cuba and stopping in Havana. Using the strong Gulf Stream current - shown here - ships would sail northwards from Havana while being steadily forced to the southeast thus alighting at the deep water port of Veracruz. On the return, laden with silver from the mines of San Luis Potosi, the Spanish fleet took advantage of eastward blowing trade winds, which helped to overcome the strong current on the sail to Havana. From Havana they would travel northwards via the narrow passage between Florida and the Bahamas before cutting eastward and out to sea at St. Augustine. It was here, in this crucial passage between the English dominated Bahamas and Spanish Florida, that the most nefarious pirates lay in wait for their prey.

Moll further fills this marvelous map with numerous notations that, while bearing no direct impact on piracy in the region, do offer considerable insight into his political persuasions. He identifies, for example the river route through Tabasco and Chiapas, via which supplies and cannons were transported to the important Pacific port of Acapulco. He also notes the Spanish fort of Pensacola where 'all their Indians have Deserted and gone to ye French at Mobile.' Just to the east of this, in northern Florida, he identifies the land of the Apalache, once a powerful Indian empire which by Moll's time had all but vanished. This area was attacked and, according to Moll, 'brought over' to English rule by the governor of South Carolina, James Moore, in 1704.

In a few areas he also comments on some of the produce and mineral richness of the land, identifying the Silver Mines of Coahuila, the American Indian horseman of the Great Plains, Cacao Plantations in Costa Rica, sources of indigo, cochineal, and 'silvester' in the mountains of Guatemala, and the great number of 'Breeves' in Cuba and Texas. Breeves, curiously, were a kind of wild Spanish bovine that later evolved into the Texas Longhorn.

Cartographically this map does offer a few interesting innovations. These include Moll's careful and accurate depiction of the Gulf Stream current as well as his orientation of Florida's St. John's River (St. Whan's R). This is the first map since the 16th century Le Moyne map to correctly plot the St. John's river running south from its entrada north of St. Augustine. Earlier maps plotted the river running northwest into the great lake of Apalache - an error dating to Mercator's faulty 1608 mapping of the region.

In the lower left quadrant there is a remarkable indexed view of Mexico City - then as now the largest city in the Americas. This view is derived from one originally composed by Juan Gomez de Trasmonte in 1628. Trasmonte's view first appeared as part of an atlas prepared, but never published, by Dutchman Johannes Vingboons. Later Montanus acquired the plates and published it in his own 1671 atlas. This is the first rendering of Mexico City to depart from the map view drawn under Cortez. An index of the view appears just above it and identifies many of the buildings still visible today in Mexico City's zocalo and vicinity, including the Cathedral, the Palacio Real, Chapultepec, the Convento de San Francisco, and many others.

This map is hard to date precisely. The British Museum dates it to 1710, and Phillip Lee Phillips dates the Library of Congress copy to 1715. We know that it was published in Herman's Moll's 1719 folio New and Complete Atlas, but it also may have been independently issued earlier and was certainly reissued in later revisions of the Atlas. Dedicated to William Patterson, the founder of the Bank of England, and like Moll, Defoe, and so many others, a figure of the 'South Seas Company' debacle. Printed by both Thomas Bowles of St. Paul's Churchyard, and John Bowles of Cornhill, London. Both Bowles brothers operated independent and competing print shops, and it speaks well of Moll's strong sense of fairness that he so distributed his business between the two brothers. Scale ca. 1:4,300,000.

In all, this is an beautiful, fascinating, and important cartographic work by one of the most prominent English cartographers of the 18th century. A must for any serious collection focusing on the Great Age of Caribbean Piracy, the West Indies, or the 18th century Spanish colonial activity in the Americas.