1750 Vaugondy Map of the West Indies and Florida 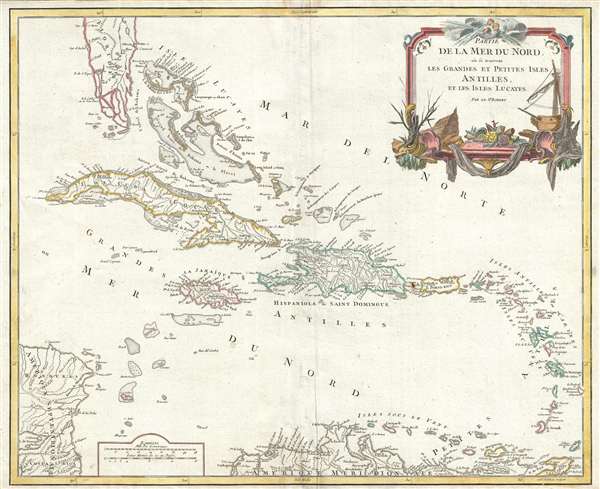 1750 Vaugondy Map of the West Indies and Florida

Centered on the important French colony of Hispaniloa.

A fine c. 1750 map of the West Indies and southern Florida by Robert de Vaugondy. Centered on the important French colony of Hispaniola, this map covers from the northern part of the Florida Peninsula to the Northern coast of South America (the Spanish Main) and from Honduras to Barbados in the Lesser Antilles. The cartographer as divided the region into three zones, the continental lands of Florida, the Bahamas or Lucayes Islands; the Greater Antilles including Cuba, Porto Rico, and Hispaniola (Santo Domingo); and the lesser Antilles or Windward Islands extending in an arc from the Virgin Islands to Granada. European powers valued the colonies in the West Indies above all others chiefly for their ability to produce sugar cane and other tropical products. It is no error that Hispaniola, then France's most valuable colony, is placed at the center of the map, suggesting both its prominence as a territory, and its natural position of dominance for the other West India Islands.

This map was engraved by Guillaume Delahaye for Robert de Vaugondy's Atlas Universel.