1801 Bowles and Carver 'Four Sheet' Wall Map of the World 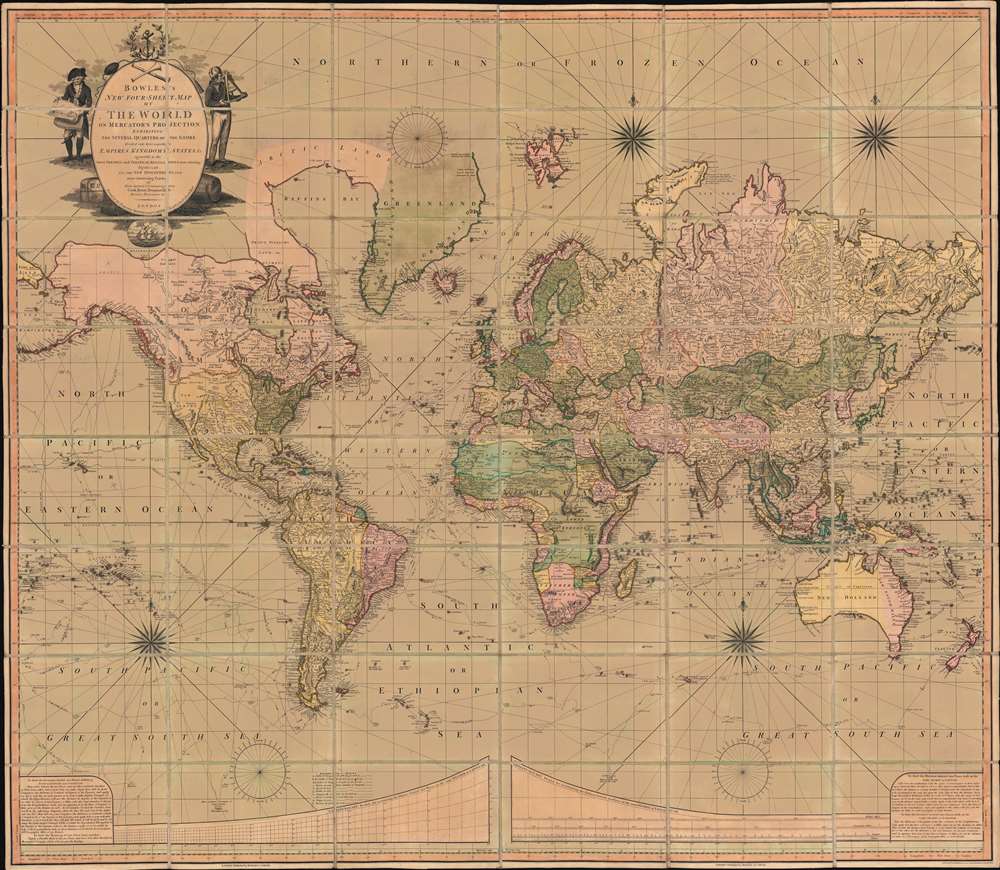 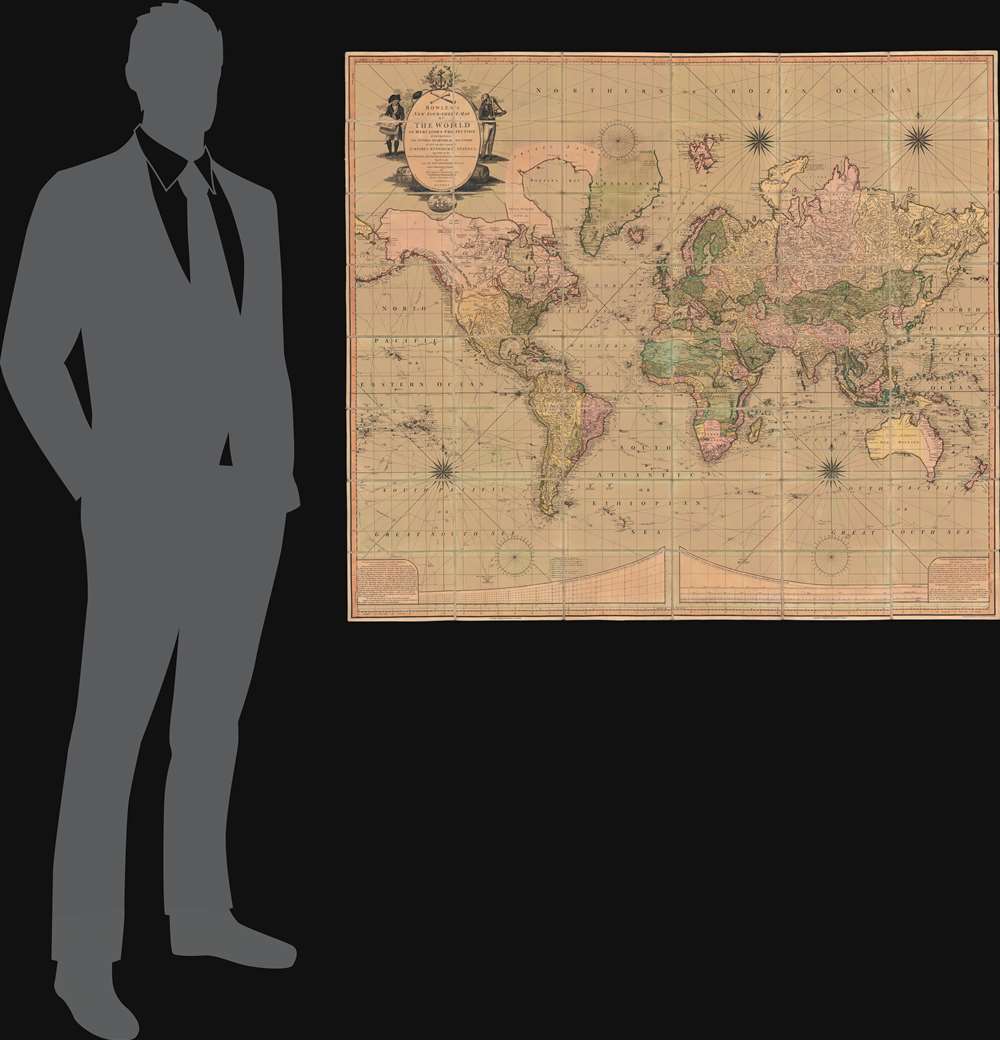 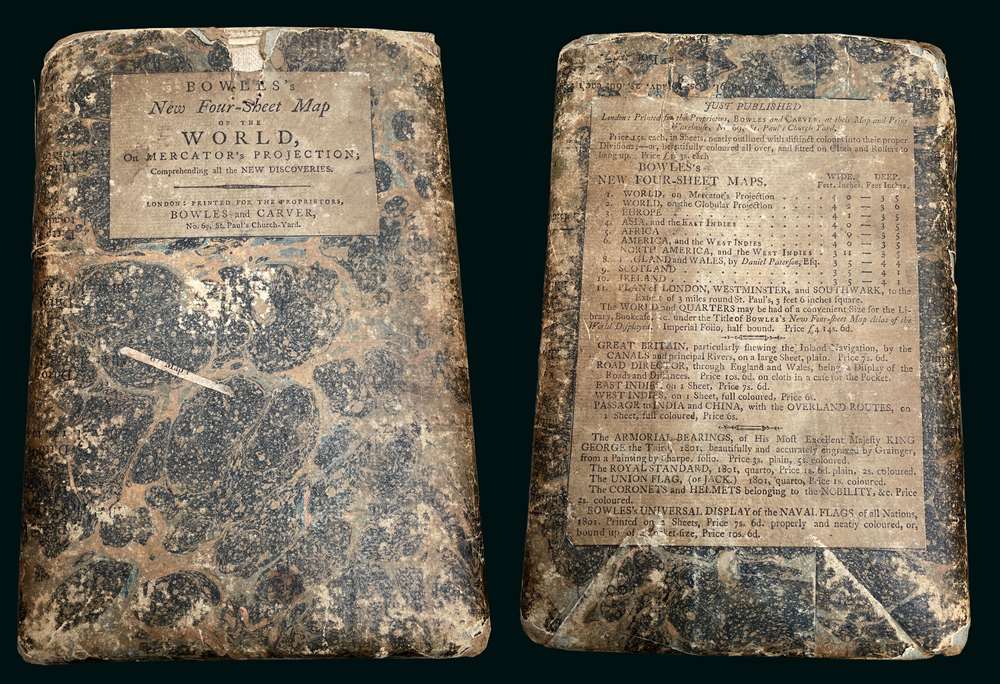 1801 Bowles and Carver 'Four Sheet' Wall Map of the World

Bowles's New Four-Sheet Map of The World on Mercator's Projection Exhibiting the Several Quarters of the Globe divided into their respective Empires, Kingdoms, States, and c. agreeable to the latest Treaties and Political Regulations now existing; Together with all the New Discovers and most interesting Tracks of those eminent Circumnavigators Cook, Byron, Bougainville, Perouse, Vancouver and c.
1801 (dated)     42 x 48.25 in (106.68 x 122.555 cm)     1 : 35000000

A beautiful old-color example of the Bowles and Carver 1801 large-format wall map of the world, on a Mercator Projection. The map celebrates the great strides forward made in world-exploration in the late 18th century - particularly by British navigators. The striking cartouche, situated in the upper left, features a sea captain consulting a nautical chart on the left, and a navigator with a sextant on the right. The cartouche is surmounted by a large anchor, the symbol of the British Admiralty. At the base of the map trade goods pile up, signifying wealth. Within the title area itself, a trumpet and telescope are crossed like swords, equating exploration with conquest.

While the map is detailed throughout, the focus is on nautical exploration. The second half of the 18th century saw numerous ground-breaking voyages, but three explorers defined the age: the three voyages of Captain James Cook (1728 - 1779), that of Jean-François de Galaup Comte de Lapérouse (1741 - 1788), and that of Captain George Vancouver (1757 - 1798). In aggregate, the exploratory achievements of these three individuals redrew the map, filling in the American Pacific Northwest, defining the Australian coastline, discovering Antarctica, and proving the impracticality of a Northwest Passage. Between these three pillars of the age, other explorers filled in the gap, such as William Moor and Francis Smith (1746 - 1747), Vice-Admiral John 'Foul-Weather Jack' Byron (1723 - 1786), and Louis Antoine de Bougainville (1729 - 1811). The significance of these explorations was not lost on the British public, whose nationally sponsored navigators contributed in no small way to this effort.

The Oregon River and the Missouri?

Despite the west coast of North American being mapped with some accuracy, the interior between the Mississippi River and the Pacific remained largely unexplored. Here the Missouri River stretches west, with a note reading 'head unknown navigable 1300 miles' - suggesting that, even before Lewis and Clark (1803), there was ample evidence the Missouri was the best route west. Further north, there is an even more intriguing reference, to the Oregon River - one of the earliest references on a map to the term 'Oregon'. Later the 'Oregon' would come to be applied to the Columbia River, but that is not the case here. Instead, Bowles likely pulled the term from Johnathan Carver's 1778 Travels Through the Interior Parts of North America in which he names the four great rivers of the North American Continent:

The River Bourbon, which empties itself into Hudson's Bay, the Waters of Saint Lawrence, the Mississippi and the River Oregon, or the River of the West, that falls into the Pacific Ocean at the Straits of Annian…

While Carver's is the earliest known specific reference to the term 'Oregon', the term may derive from much earlier. In 1703, Louis Armand, Baron de Lahontan, issued his Carte Generale De Canada, in which he splits his rather stylized spelling of 'Wisconsin' into 'Ouaricon' and 'sint'. 'Ouaricon' it must be admitted, sounds a great deal like 'Oregon.'

The earliest known example of this map dates to 1795 - likely the first edition. The map went through several subsequent editions in 1801, 1802, and 1807, at the very least. There is be remarkable confusion in catalogue entries regarding the dating, which is surprising given that near all examples bear a date just below and to the right of the cartouche. It was engraved in Islington, London, by Benjamin Baker. Most examples, as here, were printed on four sheets then dissected and laid down on linen, although we see records of at least a few undissected examples in library collections.


Benjamin Baker (1766 - June 29, 1841) was British engraver active in the late 18th and early 19th centuries. Baker was born in London, the son of instrument maker Edward Baker (1730 - 1797). As a young map he was apprenticed to Thomas Beresford, a watchmaker. This likely did not work out, as he was turned over to the engraver, mapmaker, and globemaker William Palmer (1739 - 1812). Baker rose to prominence as an engraver for the British Admiralty and British Ordnance Survey. In time he became the principal engraver for the Ordnance Survey, not only engraving himself, but overseeing the entire team of Ordnance engravers. His son, Benjamin Richard Baker (1792 - 1876) was also a mapmaker, engraver, draughtsman, lithographer, and printer. Learn More...