1808 Laurie and Whittle Map of the World in Hemispheres 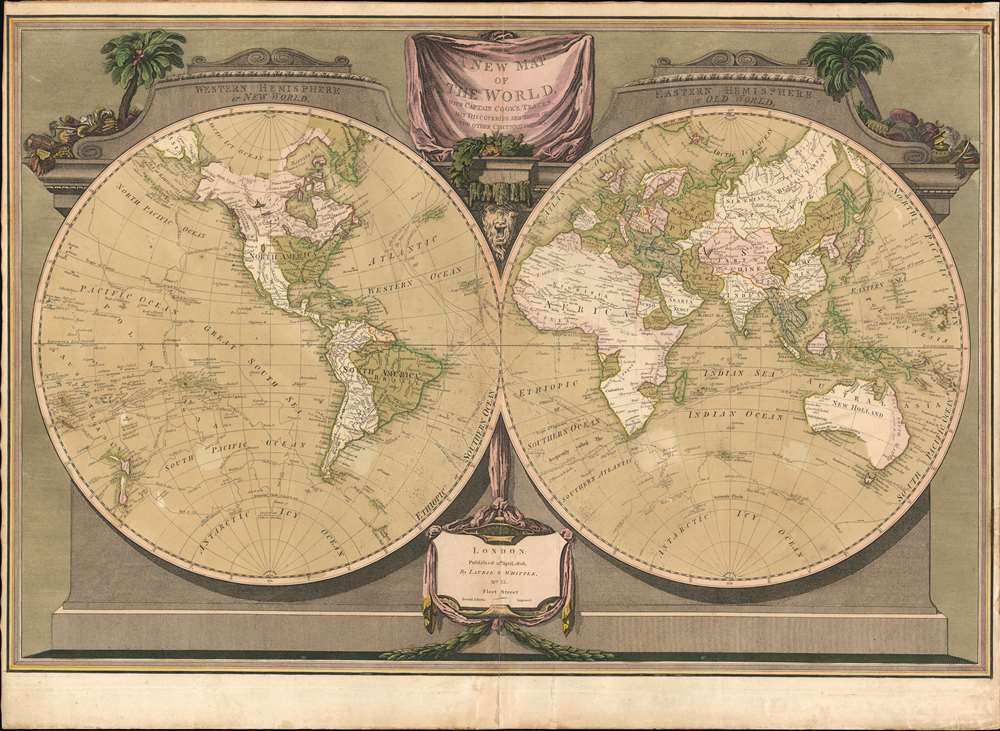 1808 Laurie and Whittle Map of the World in Hemispheres

Possibly the most decorative 19th century double-hemisphere world map, this is Laurie and Whittle's New Map of the World with Captain Cook's Tracks. The map presents the eastern and western hemisphere, set in a striking architectural border with the hemispheres adorned by a pediment identifying the Old and New World. A drape-style title cartouche adorns the top of the map and is surrounded by palms trees, native costumes, and weaponry. On the map itself, the routes of Captain Cook's three voyages, as well as the routes of other circumnavigators are noted.

Of Interest on the Map

In North America, the cartography postdates the Louisiana Purchase, with U.S territory extending west to the Sabine River (San Marcos). In the Pacific Northwest, shading emphasizes British claims to Vancouver, British Columbia, and parts of Washington. The whole area is highlighted with 'Vancouver's Discoveries', referencing the important explorations of George Vancouver. A lake appears roughly in the vicinity of Great Salt Lake, but is amorphous in form. In South America, many of the cartographic fantasies of the 18th century have been rectified, but Lake Parima and the Lago de Xarayes both appear, if in much reduced form. Likewise, in Africa the Ptolemaic lakes at the source of the Nile and the speculative Mountains of the Moon are gone, but the cartographer connects the White Nile with the Niger - an understandable if interesting error. Australia is identified as 'New Holland', with discoverers of various parts of the continent noted. The south coast, around Melbourne, remains unknown. Port Jackson is identified, but no settlements in New South Wales are noted. In Asia, the sea between Japan and Korea, whose name is today disputed between the two countries, is identified as the 'Corean Sea.'

The sea between Japan and Korea, whose name, either the 'Sea of Korea,' 'East Sea,' or the 'Sea of Japan,' is here identified in favor of Korea (Corean Sea). Historically, Korea has used the term 'East Sea' since 59 B.C., and many books published before the Japanese annexed Korea make references to the 'East Sea' or 'Sea of Korea.' Over the centuries, neighboring and western countries have identified Korea's East Sea using various terms. The St. Petersburg Academy of Sciences referred to the East Sea as 'Koreiskoe Mope' or 'Sea of Korea' in their 1745 map of Asia. Other seventeenth and 18th century Russian maps alternate between 'Sea of Korea' and 'Eastern Ocean.' The 18th century Russian and French explorers Adam Johan von Krusenstern and La Perouse called it the 'Sea of Japan,' a term that became popular worldwide. Nonetheless, the last official map published by the Russians name the East Sea the 'Sea of Korea.' The name is currently still a matter of historical and political dispute between the countries.

This map was engraved by William Palmer and issued by the firm of Laurie and Whittle. The first edition appeared in 1799, with a second edition (present example) appearing in 1808. A third edition followed in 1812. Examples are surprising scarce given that this map was issued in multiple editions of a popular atlas. The map is well known, as it has been widely reproduced from the example in the Library of Congress, but originals, as here, with fine old color, are exceptionally scarce to the market.


Richard Holmes Laurie (December 2, 1777 - January 19, 1858) was a British map and chart publisher and seller. Born in London to publisher Robert Laurie and his wife Esther Jouret, R. H. Laurie took over his father's share of the Laurie and Whittle publishing firm upon his father's retirement in 1812 and began trading as Whittle and Laurie. After Whittle died in 1818, Laurie continued the business by himself, trading under the imprint R. H. Laurie. During the 1820s and 1830s, Laurie expanded the nautical chart business until he was overtaken by Admiralty charts. Laurie married Susan Ann Coates on February 6, 1814 and later married Mary Ann Dennison on October 15, 1833. He left his business and all his property in trust for his two surviving daughters (both of whom were minors) with his principal engraver, Alexander George Findlay. Findlay continued the business in Laurie's name after acquiring its equity from his daughters. Learn More...


William Palmer (March 4, 1739 - November 1812) was a British engraver, gun engraver, mapmaker, and globemaker active in London in the late 18th century. Palmer was born in London, the son of William Palmer Sr., a pants maker. He was apprenticed to the goldsmith and engraver John Pine in 1753. When Pine died in 1757, his apprenticeship was transferred to the prominent engraver Richard William Seale (1703 - 1762). Palmer flourished under seal's guidance, marring Mary Seale, his master's youngest daughter in 1762. In that same year, he took over Seale's workshop, becoming a prominent engraver in his own right. From 1780 to 1790 he partnered with the globe maker John Newton (1758 - 1844). After 1790 he separated from Newton, partnered with his son, John Palmer, establishing the imprint of William and john Palmer. He notable engraved some of the charts for the official account of Cook's voyages, as well as charts for William Faden, Robert Sayer, Alexander Dalrymple, Laurie and Whittle, and Robert Wilkinson. Palmer is also known in gun collecting and furniture circles for his fine metal engraving work, which can be seen on John Channon furniture, among others. Learn More...