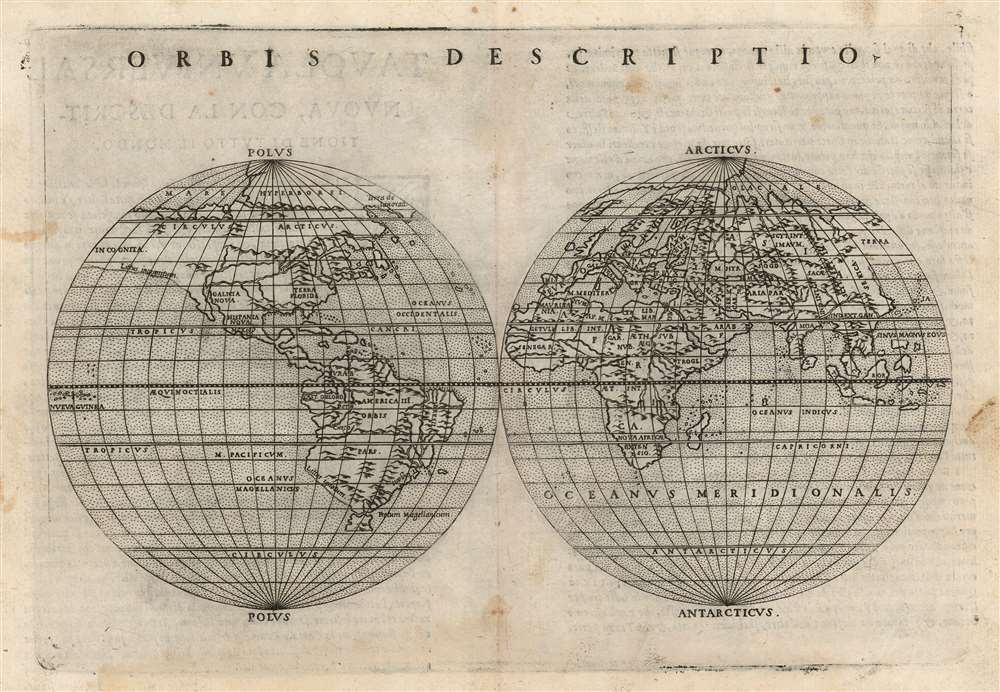 This is Girolamo Ruscelli's 1561 double hemisphere map of the world, in its second state of 1574. It is the earliest acquirable world map in this format and is the first such to appear in a printed atlas. Like most maps in Ruscelli’s Ptolemy, the geographic details were based on Giacomo Gastaldi's (1500 - 1566) 1548 Ptolemy. Here, the double-hemispherical projection transforms this map into a fully new composition. Amongst printed maps, it is predated only by the unacquirable 1555 Georgio Sideri 'Calapoda' (fl. 1537–1565) map.

The map is oriented to the north, with the three parts of the old world in the right hemisphere and the fourth part of the world - the Americas - dominating the left hemisphere. Some geographical elements appear to be derived from Gastaldi's 1546 and 1548 world maps, but unlike Ruscelli's Carta Marina Nuova Tavola (which was a faithful copy of Gastaldi's 1548 Carta Marina Nova Tabula), this map diverges from any prior source. As with Gastaldi's maps through 1561, Ruscelli's map depicts a clear connection between the continents of Asia and North America. But Gastaldi's map lacks the distinctive river system extending from the Gulf of California into the middle of the continent, and includes none the pattern of imaginary mountain ranges in North America that appear on Ruscelli's map.

In several key locations, Ruscelli completes coastlines using a distinct broken line to indicate unexplored or speculative territory. On the southwest coast of South America and on the southern coast of the landmass connecting North America and Asia, this is reinforced with the notations 'Littus incognitum' and 'Littus ignotum'. The same use of broken lines is applied to the southern coasts of Tierra del Fuego and Java, though the notation does not appear (and would not have fit, typographically). The northernmost island of the East Indies is also shown with a dotted, indeterminate coast.

Ruscelli may have derived his remarkable insular Northeast from the conflation of the Hudson River with the Saint Lawrence appearing on the Gastaldi-Ramusio map, but these features do not appear on any of Gastaldi's printed world maps. The bay separating the American Northeast from 'Terra Florida' may have been influenced by the idea of the Sea of Verrazano, which appears prominently on Gastaldi's Carta Marina but not his other 1548 world map.

The overall shape of South America, including the shape of the mouth of the Rio de la Plata, is similar to the c. 1561 Gastaldi but is very different from his earlier works, and very distinctive in its broad and angular shape. An important divergence from Gastaldi's world maps is Ruscelli's treatment of Tierra del Fuego. Unlike Gastaldi, and most of the geographers of the era, Ruscelli does not present the land beyond the Strait of Magellan as part of a massive southern continent - instead leaving the area blank.

South Asia is mostly recognizable. The Indian peninsula, though narrow, resembles modern (as opposed to Ptolemaic) geography. Sri Lanka is marked with a Z, indicating that it is being identified as Zeylon (Ceylon), as opposed to Taprobana, which we see contracted into 'Tapr.' and applied to Sumatra. Borneo also appears and is initialed 'Bor.' The island of Java is illustrated with an indeterminate coast, and the island north of Borneo (roughly corresponding to the Philippines) bears a similarly tentative northern shore. Interestingly, the map lacks Japan - unless the archipelago with the initials 'IA' is intended to represent it. This would conform with Gastaldi's earlier small maps of the world, which also lack Japan.

As enumerated above, Ruscelli's map incorporated features from conventional maps of the day but applied them in unique ways. Mapmaking in Europe would swiftly outpace Ruscelli, and cartographic innovation would pass from Rome and Venice to Antwerp and the Netherlands. From there, the works of Mercator and Ortelius would become the standards most widely copied by subsequent mapmakers - so much so that the 1571 map produced by Arias Montanus would appear to have materialized out of thin air, despite being on balance an enlarged copy of this Ruscelli. (The absence of a southern continent, and the engraver's license in engraving the coasts of Java, would lead to wild and spurious intimations that the 1571 map somehow revealed an unrecorded, pre-seventeenth-century discovery of Australia.)

This map was engraved for the 1561 edition of Ruscelli's La Geografia di Claudio Tolomeo. The maps of that edition were engraved two-to-a-plate, and consequently the platemark runs off the edge of the sheet at top. Afterwards the plates were divided, and examples from 1574 onwards exhibit a platemark all around the map. This example conforms typographically to the 1574 edition of Ruscelli's work. We see six examples of this separate map cataloged in OCLC.

Very good. Plate mark visible, running off sheet at top, as with all examples of the 1561 plate. Some toning at centerfold, faint text show through, else excellent.