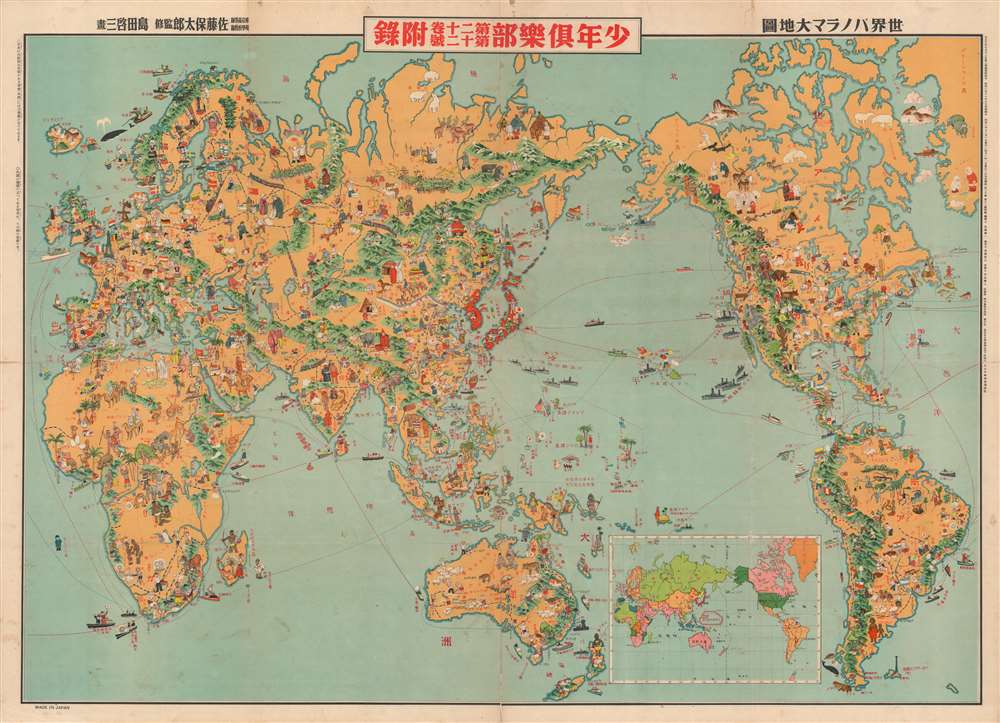 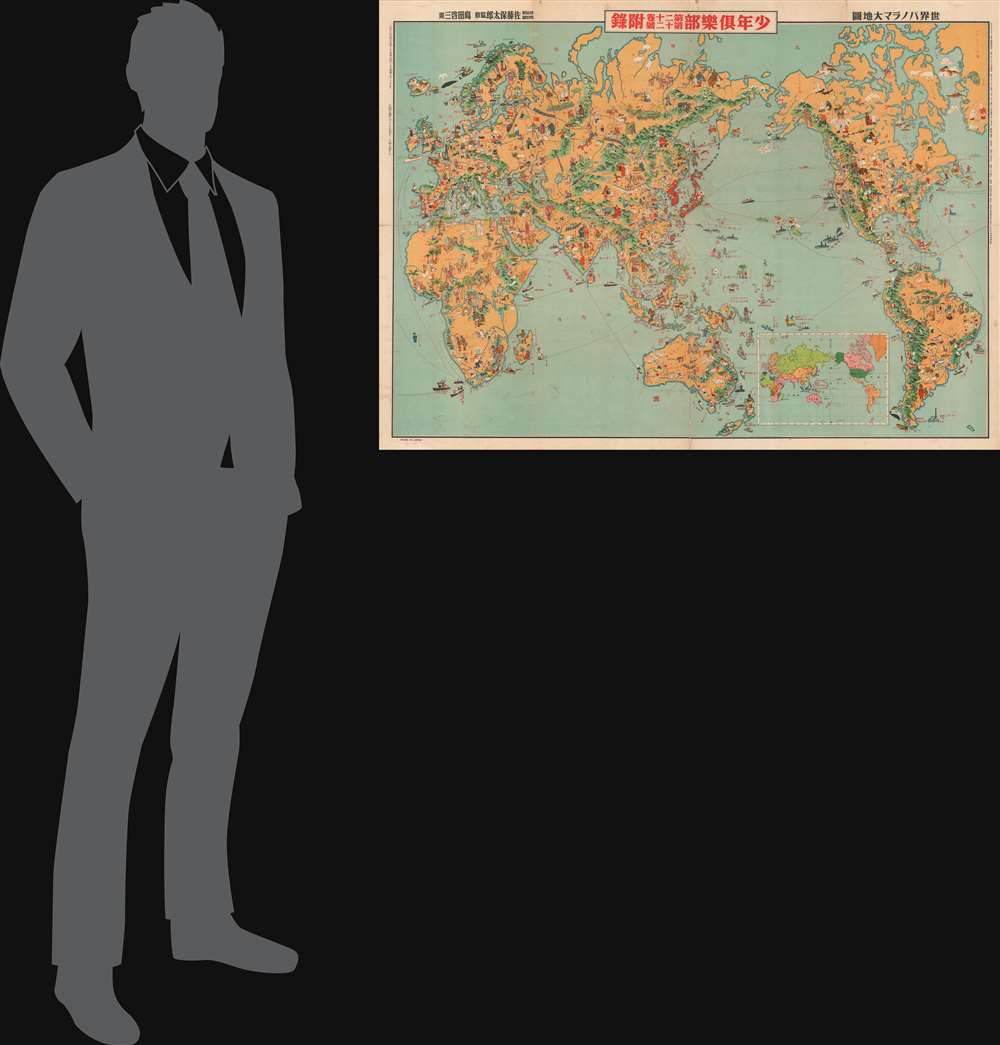 A remarkable 1933 Japanese issue pictorial map of the world drawn by Keizo Shimada (島田啓三). Centered on the Japanese Empire, which is highlighted in red and includes both Taiwan and Korea, this map extends to cover the entire world except for the Atlantic, which is only minimally addressed.

The map presents a delightful array of vignettes intended to illustrate regional history, culture, flora, and fauna (look for Napoleon at St. Helena in the south Atlantic). Some of the images, despite being unbearably 'kawaii', are decidedly not politically correct, such as the rather intimidating looking Indian Chief in the Rocky Mountains. Despite the map's playful nature, Japan had already begun its grab for power in East Asia and the military aspect of the map is clear. Japanese destroyers patrol the western Pacific just as American destroyers stand watch on the Pacific Coast and in Hawaii. The casual intermingling of popular culture, including youth culture, and militarism was characteristic of Japan in the 1930s and helps explain why Japanese military leaders and the public felt emboldened to invade more and more territory.

Typical of Japanese propaganda of the war years, nearby Asian peoples (in Mongolia, India, the Philippines, and Saipan) beckon towards Japan, seeking modernity and liberation from foreign imperialism. The resources of various countries are indicated with illustrations and text, particularly in China, adding an ominous undertone to the innocent cartoons. Buildings with Japanese flags indicate the location of Japanese embassies, consulates, and overseas territories (such as the South Seas Mandate in the South Pacific), while the presence of Japanese diaspora communities in Hawaii, South America, California, Australia, and elsewhere is noted. An inset map at bottom-right presents a more 'typical' world map without cartoon figures.

This map was made soon after the Mukden Incident in September 1931 and the establishment of the Japanese puppet state of Manchukuo in early 1932. These events marked a significant strengthening of the military vis-à-vis the civilian government and a dramatic break with the international community (Japan was roundly condemned in the League of Nations and walked out of the organization as a result). Rather than weakening far-right forces, a failed coup in 1932 and other plots to overthrow the government met with weak responses by the establishment, which was distracted by financial crises and unsure of how to respond to popular support for aggressive militarism (especially since militarism appeared to have tacit support from the emperor). Not long after this map's production, this noxious mix of emperor worship, nationalism, and militarism would lead Japan into a full-scale war in China, and eventually into a devastating conflict with the major Western powers.

Youth Club (少年倶樂部) was a monthly magazine for boys published from 1914 – 1962 by Dai Nippon Yūbenkai Kōdansha (大日本雄辯會講談社, now known simply as Kōdansha). It was an important contributor to the birth of mass youth culture in Japan. Along with Youth Club, Kōdansha published several other magazines, including Women's Club (婦人倶樂部) and King (キング), and had become a major shaper of Japanese culture and public opinion by the 1930s, controlling 70% of the magazine market.

This map was published as an addendum to the December 1933 issue of Youth Club (少年倶楽部), a monthly boys' magazine that was issued by Kōdansha. The map was drawn by Shimada Keizo (島田啓三), overseen by geographer Satō Yasutarō (佐藤保太郎), edited by Katō Kenichi (加藤謙一) and published by Sutō Kenzō (須藤憲三) of Kōdasha, and printed Ei Teizō (日永悌三) of the printing house Yūkōsha (株式會社有恆社). The map is held by the David Rumsey Center at Stanford University, the University of Illinois at Urbana Champaign, and the Nichibunken (International Research Center for Japanese Studies).

Keizo Shimada (島田 啓三; May 3, 1900 - 1973) was an early Japanese mangaka (漫画家), best known for his comic The Adventures of Dankichi, serialized in Youth Club (小年俱樂部) magazine, published by Dai Nippon Yūbenkai Kōdansha (大日本雄辯會講談社). The comic, based around the adventures of a young boy shipwrecked on a remote island in the South Pacific, was similar to The Adventures of Tintin. Like Tintin, it was later criticized for celebrating imperialism and denigrating other races. Dankichi also resembled its contemporary, another pioneering manga, Tagawa Suihō's Norakuro, in that both became a tool for propaganda during the Second Sino-Japanese War (World War II). Learn More...


Satō Yasutarō (佐藤裕太郎; March 5, 1893 – March 7, 1977), or Satō Yūtarō, was a Japanese educator active in Tokyo during the Taisho and Showa Eras. During and just prior to World War II, he worked with the Japanese Youth Club (少年俱樂部), a popular magazine which published several important manga maps of East Asia. After the war, Yasutarō became a professor at Tokyo University of Education and later, the the Senshu University. Learn More...

Good. Some wear and small areas of loss along fold lines, especially at fold intersections.