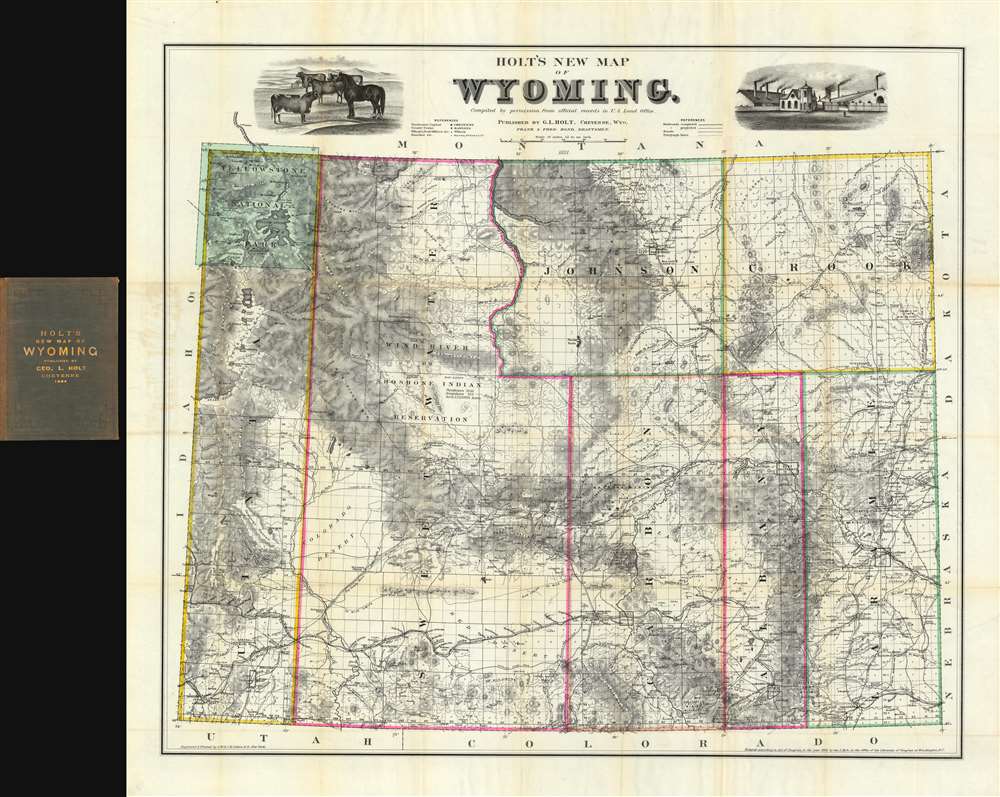 The finest commercial map of Wyoming Territory issued at the height of the Wyoming Cattle Boom.
$8,000.00

A near flawless 1884 second edition of Holt's important and rare separate-issue map of Wyoming Territory. Issued at the height of the Wyoming Cattle Boom (Bubble), Holt's map is considered to be one of the finest maps of Wyoming and the earliest commercially published map to show the territory in significant detail. Throughout, the level of attention to accuracy is extraordinary, with individual residences, ranches, forts, Indian reservations, mining districts, resources, railroads, stage roads, and regular roads named. To the left and right the title, vignettes of cattle and a meat processing plant pay homage to the Wyoming Territory's then bourgeoning cattle industry. In the upper left corner of the map, Yellowstone National Park is mapped with care.

Settlement in Wyoming began around 1841 and grew steadily through the middle and late 19th century. Emigrants traveling westward along the Oregon Trail were entranced by Wyoming's open range and mild winters - perfect for cattle ranching. In the 1860s, the Union Pacific Railroad routed through Cheyenne instead of Denver, further increasing Wyoming's appeal as a center of large-scale ranching. Wyoming historian T.A. Larson estimates that by 1886 there were 1.5 million cattle (the same as now) on the range and the industry dominated 90 percent of regional commerce. This commodious situation would not last. In the year this map was made, 1884, a terrible drought hit northern Texas and slowly crept northward hitting the Wyoming ranges 2 years later. The summer of 1886 was the driest yet recorded, and the following winter of early 1887 the coldest, with temperatures regularly reaching 60 degrees below zero. Hundreds of thousands of cattle died from the harsh conditions, an equal amount where shuttled to slaughterhouses in Chicago, driving the price of wholesale steers down to 1/2 its 1884 high. Larson estimated that Wyoming lost about 15 percent of its total herd, with ranchers in Crook and Carbon counties losing more than 25 percent. Ranching in Wyoming continued after the bubble burst, but on a much more modest scale, and it was not until present that the cattle population again aspired to pre-1886 levels.

Yellowstone National Park is the first national park established in the United States and, arguably, the world. It was signed into law by President Ulysses S. Grant in March of 1872. The park is mostly contained in northwestern Wyoming, but parts extend into adjacent Montana and Idaho. In total, Yellowstone National Park covers some 3468 square miles, encompassing thousands of acres of iconic lakes, canyons, rivers and mountain ranges centered over the Yellowstone Caldera, the world's largest supervolcano. The volcano, which has erupted 2 - 3 times in the last several million years, remains active, leading to the park's famous hydrothermal activity, including more than half of the world geysers.

This scarce map was drawn by Frank and Fred Bond, draftsmen in the employ of the Surveyor General of the District of Wyoming. It was published by George L. Holt of Cheyenne, Wyoming. The map was lithographed and printed in New York by the firm of G.W. and C. B. Colton. There were five editions; 1883, 1884 (present example), 1885, 1886, and 1888. The present example is the 2nd state, issued in 1884, predating the creation of Fremont County. A half-sized version of the map, without the vignettes was later issued for the House of Representatives Documents of the 49th Congress (1885 - 1887)

George L. Holt (fl. c. 1867 - c. 1910) was a Wyoming druggist, businessman, and publisher based in Cheyenne, Wyoming during the second half of the 19th century. He was one of the earliest pioneers to Wyoming, arriving in Cheyenne in September of 1867. Holt ran a drugstore on Main Street, Cheyenne, upon which the entire region relied in times of need. In the 1880s he and his wife relocated to Buffalo, Wyoming, where his drugstore continued to operate until roughly 1920. Along with Peter Murray, he was also a shareholder in the 'Cross H Ranch', located just south of Buffalo. Holt was a board member of the First National Bank of Buffalo, the first such bank charted in Wyoming Territory. Holt one important map of Wyoming from 1883 to 1888, but no other known maps. He was survived by his son, Wilbur R. Holt.


Frank Bond (1856 - 1940) was an American cartographer, draftsman, surveyor, illustrator, and politician. Born in rural Jones County, Iowa, Bond graduated from the University of Iowa. In 1772, he moved to Cheyenne Wyoming, where he worked for the Wyoming Surveyor-General's Office and later the General Land Office as a draftsman. He left this position to edit the Cheyenne Tribute and engage in local politics. Bond was elected as a member of the first Wyoming legislature. In 1900, he moved to Washington, D.C., where he held the positions of Chief of the Drafting Division and Chief Clerk at the General Land Office. While at the Land Office, Bond helped determine the borders of Yosemite National Park . As a skilled mapmaker and illustrator, Bond created numerous maps. He was also an active illustrator, painter and ornithologist, creating and preserving bird refuges throughout the country. He had a twin brother, Fred Bond, was also an important surveyor and draftsman.