1932 Julius Muller Map of Wyoming and the State's Highways 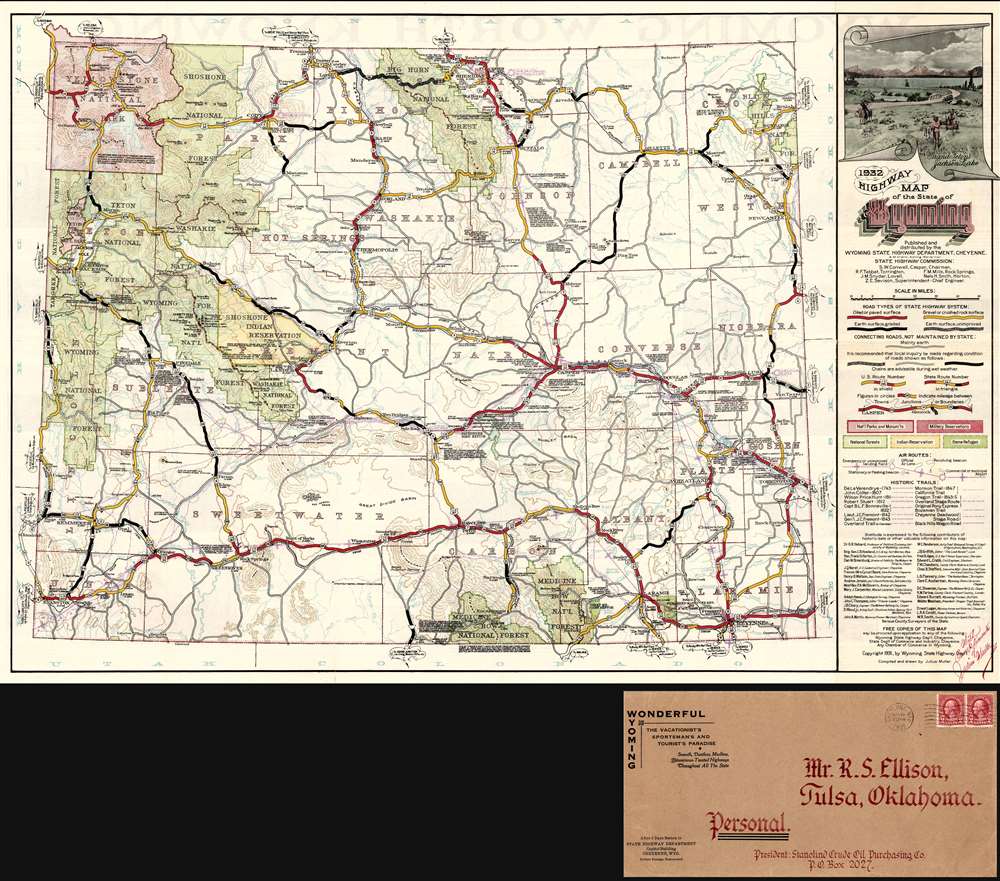 1932 Julius Muller Map of Wyoming and the State's Highways

Scarce Example of the First Official Highway Map of Wyoming, Signed by the Author

A superb example of the first official highway map of Wyoming, signed by the mapmaker, Julius Muller and printed in 1932. The map's title is surmounted with a decorative view of the Grand Tetons and Jackson Lake. The map shows the network of roads, differentiating between those in the State Highway System and those not maintained by the state. Color is used to distinguish oiled or paved roads, gravel roads, graded dirt roads and 'unimproved' dirt roads. Among the roads not maintained by the state, shading and thickness indicates roads that invite 'local inquiry regarding condition' and on which 'chains are advisable during wet weather.' A truly modern map, it includes air routes, and shows landing fields, airports and navigational beacons. Where roads lead the reader off the map, attractively-framed text indicates the prime destinations via that specific route (eg., 'To Rocky Man Nat'l Park or DENVER via Fort Collins and Loveland.')

A signed example, with the original enclosure

The map bears, in red ink in an extremely fair hand, the signature 'With Compliments Julius Muller.' Present as well is the official Wyoming State Highway department envelope in which the map was originally enclosed. The envelope is addressed (in painstaking, beautiful calligraphy executed in the same red ink as the signature on the map) to Robert Spurrier Ellison (1875 - 1945) of Tulsa, Oklahoma. Ellison was President of the Stanolind Crude Oil Purchasing Company and the Stanolind Pipeline company, and a book collector (his focus was Western Americana.) On a personal note, Ellison had been a resident of both Denver, Colorado and Casper, Wyoming at the same time as Muller, suggesting a high likelihood that they were acquainted. The envelope bears two 2-cent stamps, cancelled April 19, 1932 - the same year this first edition of Muller's map was available. It is not difficult to surmise that Muller was personally treating his successful hometown acquaintance to a sneak preview of his opus.

The map also marks the 13 historical paths, both tied to individual explorers (such as Colter, Bonneville and Fremont) and those associated with larger movements (such as the Mormon trail, the Oregon Trail and the route of the Pony Express.)

the reverse of the map, bearing the title 'Wyoming Worth Knowing' contains a road map of the United States showing the position of the State of Wyoming. Text describes each of the State's counties, and describes in detail the state's historical sites, mountain ranges and passes, peaks, canyons, glaciers and other points of interest.

The map is neglected in institutional collections, residing only at Yale, Montana State University, the Newberry, and Brigham Young University. An updated 1933 edition appears in slightly greater number, and OCLC shows further updated editions of 1935 and 1936 as well. We see no examples in dealers' catalogues or auction records.

Julius Muller (March 20, 1875 - December 12, 1948) was a Jewish German-American businessman, draftsman, surveyor, and civil engineer. Muller was born in Altonkunstad, Germany but by 1889, at roughly 14, he had emigrated to the United States. It is unclear where in the United States he lived until about 1897, when his is documented in Leadville, Colorado. He was naturalized a U.S. Citizen on year later in 1898. In 1899, he became a clerk for the Jewish Clothier Freedheim Brothers. In 1900 he became a clerk for Baer Brothers Mercantile, a Jewish cigar and liquor merchant. He remained with Baer Bothers until about 1910, when he succeeded into the ownership of said firm, renamed Muller Co. He became quite successful seller beer and spirits and even joined the 'Gentleman Driving Club', competing in several races. When Leadville turned into a dry town, well before national Prohibition, Muller relocated to Denver, and by 1919, to Casper, Wyoming. In Wyoming he worked as. A Civil Engineer, although it is unclear where he received he straining. He remained as a Civili Engineer in Wyoming until his retirement in the mid 1930s. He was employed with the Wyoming highway department and public survey office, and lived the remainder of his life in Casper and Cheyenne. In 1932 he produced the first official highway map of the State of Wyoming. Muller is also the author of The ABC of American Defense, and was known as an expert marksman and talented clarinetist. He died in Cheyenne, Wyoming and was survived bu a daughter. Mildred H. Eakin. Learn More...