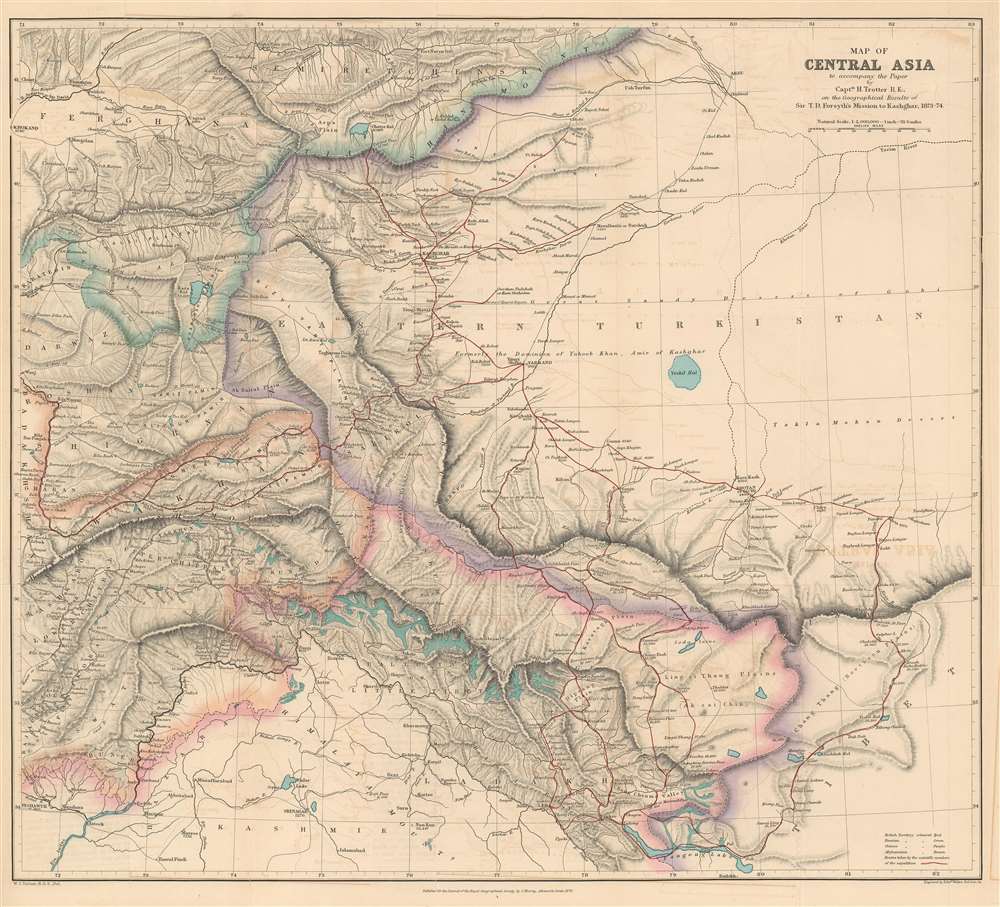 One of the first western maps of Xinjiang, China illustrating a British trade mission from India into the region.

This is an 1878 William John Turner and Royal Geographical Society map of Xinjiang, China that traces explorations of the Forsyth Mission of 1873 - 1874, making this one of the first detailed Western maps of the region. The map depicts the region from Peshawar, Pakistan to Tibet and from the Tian Shan Mountains to Pangong Lake. British, Russian, Chinese, and Afghan territory are outlined in different colors and are explained in a key situated in the lower right corner. The routes taken by the various different teams that constituted the Forsyth Mission are traced in red. Three different groups set out from Leh, in India, and met back up at Yarkand, in the 'Dominion of Yakoob Khan', and proceeded to Kashgar, where they met Yakub Beg.

In 1870, T. Douglas Forsyth led an unsuccessful mission into this part of the world from India to meet Yakub Beg, the leader of the Dungan Revolt against the rule of Qing Dynasty, in order to secure a trade agreement between Beg and British India. By the time Forsyth reached his destination, Beg, known as the 'Atalik Ghazi', was six hundred miles away. Forsyth's 1873 mission proved successful, and, after gaining the blessing of the 'Atalik Ghazi', Forsyth and his team were able to use their scientific equipment to accurately map their expedition. The 1873 mission officially had the same objective as his previous one, to secure a trade agreement with Beg, with the hope of preventing him from trading with Russia. Russia and Britain were locked in a rivalry that has become known as 'The Great Game'.

OCLC 556424213. Harvard University Bulletin, Volumes 4-5, 'Classified Index to the Maps Contained in the Publications of the Royal Geographical Society', #200.